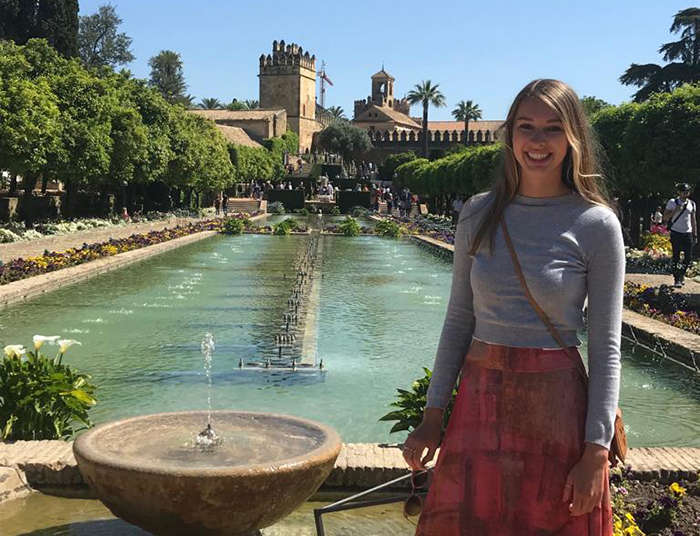 Olivia Lowden ’19 has had many exceptional opportunities to learn during her time at Dickinson—in class; on the track; in the lab, where she conducted three original-research projects with professors; through internships with orthopedic and neurology clinics; and as a study-abroad student in Spain. She also had an opportunity to combine what she learned in both of her majors out in the field, providing Spanish translation services for medical staff treating migrant workers. But it was her experiences as a volunteer with the Spanish Red Cross, the summer after her study-abroad experience, that most dramatically brought what she was learning in class into sharp focus. “This was by far the experience that I learned the most from, because I was interacting with patients in Spanish who suffered from a brain disorder that I had studied in my class, Brain and Behavior, at Dickinson,” she says.

The Secret Life of Bees by Sue Monk Kidd.

I decided to attend Dickinson because of the strong neuroscience program and running team. I knew that I wanted to attend a school where I could feel close to my professorsand be challenged academically while still having the opportunity to participate on a cross countryand trackteam. Dickinson’s abroad programsand focus on sustainabilitywere also very appealing to me.

The cafeteria in the morning or the Rector atrium.

[Lecturer in Spanish] Asuncion Arnedo-Aldrich’s Spanish for the Health Professions, which I took during the fall of my sophomore year. In this course, we learned how to translate medical information for migrant farmworkers in Pennsylvania. We would travel with nurses from Keystone Clinic once a week to seek out migrant farmworkers who were in need of medical attention. This class really helped me bridge the gap between my two majors and pushed me to look for more opportunities to continue doing so.

I play the harp.

[Professor of Psychology] Teresa Barber, who is also one of my advisors. She has helped me make so many decisions during my time at Dickinson and has also taught me so much in her classes, Brain and Behavior and Research Methods in Biological Psychology. Whenever I’m feeling doubtful or stressed, she always tells me, “You are going to be fine,” and has made me realize that career paths are often more rewarding if they are not overly calculated or linear. She has been a part of so manyinteresting studies and has had a very successful career as a researcher, which is inspiring to all of her students. Her door is always open (with candy outside), and she always has a way of putting things in perspective.

… the Queen of England. She is the only person in the world who can travel without a passport, and I think she would have some amazing stories.

During the spring of my junior year, I studied abroad in Málaga, Spain. Looking back, this is one of the best decisions I made in college, because it helped me look at my life in a completely different way. I could not believe how much my Spanish improved and how in-tune I felt with the Spanish culture by the time the program ended. I was so happy in Málaga that I decided to stay during the summer and work at an Alzheimer’s day center with the Red Cross. I met so many fascinating people in Spain who made me feel like I was part of the community, which was the highlight of my experience.

Over the past few years, I have had internshipsin orthopedic, ophthalmology and neurosurgery clinics. In addition, I volunteered at la Cruz Roja (the Red Cross) in Málaga, Spain, this summer. This was by far the experience that I learned the most from, because I was interacting with patients in Spanish who suffered from a brain disorder that I had studied in my class, Brain and Behavior at Dickinson. This experience both helped me with my confidence in Spanish and exposed me to patients who suffer from brain disorders.

In a perfect world …

Last year I was also involved in a research project in Professor Barber’s Research Methods in Biological Psychology class, which produced an experiment titled “The Decrease in Anxiety in Valerian-Injected C57BL6J Mice and the Non-Significant Effect in 129S1/SVLMJ Mice.” This experiment looked at the effects of an herbal remedy on the brain and was presented at the Eastern Psychological Association Conference in March. I never thought that I would have the opportunity to be a part of so much research during college. This experience has helped me understand the methods used in this field of science and has been instrumental to my growth as a neuroscientist.