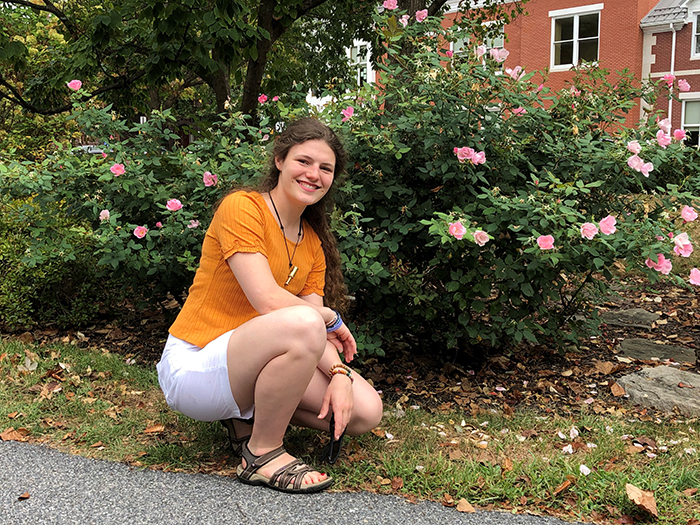 As a student of Spanish language and culture, Alaina Clemence ’22 believes in the importance of intercultural understanding. By translating Spanish texts into English, she hopes to heighten intercultural empathy.

Spanish, with minors in music and creative writing.

Aristotle and Dante Discover the Secrets of the Universe by Benjamin Alire Sáenz.

Whisper of the Heart.

Best thing about my major:

My favorite part about being a Spanish major is not just studying the language itself, which I love for its musicality and beautiful structure, but also for its potential for communication. My focus is translation, mainly because many more English texts are translated into other languages than vice versa. This creates the expectation that other countries should have knowledge of the English-speaking world, but the same is not expected of English speakers and the texts of other countries. I personally believe this contributes to a general lack of understanding and empathy for the ideas of non-English-speaking writers. Thus, translating the ideas of a Hispanic writer into English so more people may establish intellectual and emotional connections to the content is very important to me.

I was accepted Early Action, and I was trying to make my decision the weekend of Springfest. When I revisited the campus a third time with my family, I covered my nametag and walked around the campus, seeing how people treated each other and me as I walked by, and then I settled down for an hour in the library to study for my senior-year final exams, as if I were already a student at the college. As I worked, I realized that, in addition to loving the college’s offerings on paper, I could be happy and successful on this campus. I can confidently say that has held true for all my years here!

The shrimp and tofu noodle bowls.

Professor of Music Amy Wlodarski! Whether it’s about our choir repertoire or the sociopolitical nuances of a music history course, she makes the content so exciting to engage with that I genuinely cannot wait to exchange ideas with her and my peers. Her encouragement of critical thinking and making connections across disciplines is one of my favorite things about the way she teaches, and I would highly recommend taking a course with her.

I can recite entire scripts of movies if I’ve seen them enough times; my go-to examples are Monster’s Inc., Beauty and the Beast and How to Train Your Dragon.

You will never regret putting in the effort to understand. Whether that is about your own learning habits, the content of a course or an opinion expressed by a peer, take time to reflect, make connections to your own experiences and knowledge and draw your own conclusions.