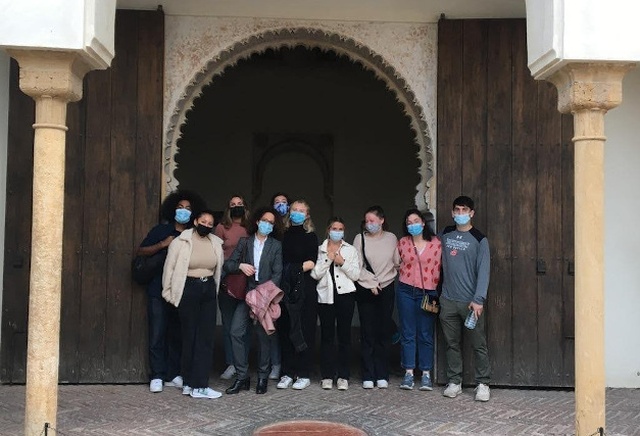 Our students studying abroad in Málaga, Spain at the University of Málaga (CIA-UMA) had the opportunity to visit the Alcazaba of Malaga guided by Cristina Ortega, professor of Art History and Culture at the International Center for Spanish at the university, and accompanied by Elise Bartosik Vélez, professor at Dickinson College and coordinator of the U.S. program for this academic year.

During the visit, the students were able to tour the Alcazaba-Castillo de Gibralfaro complex joined by La Coracha and they were able to observe the defense towers and Roman remains. They were also able to view the port of Málaga but were guided to imagine what it would look like without the current building and the park promenade since originally, the Mediterranean reached the foot of the Muslim monument.

According to Ortega, the most outstanding curiosities by groups like this are what life was like in the palace and the hydraulic infrastructure. That is, how the water was channeled to the fortress, among others. “The objective is none other than to transfer the knowledge of Hispano-Muslim art that students receive every day in class outside the classroom. In this way they observe with their own eyes, and not only through text, photography, or video, the real remains of Arab culture, in this case, in the city,” points out the CIE-UMA professor. Other visits where the influence of other cultures such as Roman or Phoenician is shown are those made to the Roman Theater and the ruins on the ground floor of the Picasso Museum.

Dickinson’s Professor Bartosik-Vélez underlines the importance of the linguistic and cultural immersion program in Málaga, the CIE-UMA and the university. She also emphasizes that the return to normality after the pandemic has motivated a good part of the student body to travel to the city of the Costa del Sol, not only to learn Spanish, but also its culture, traditions, and popular customs, almost always accompanied by families malagueñas who are also intermediaries in this process.