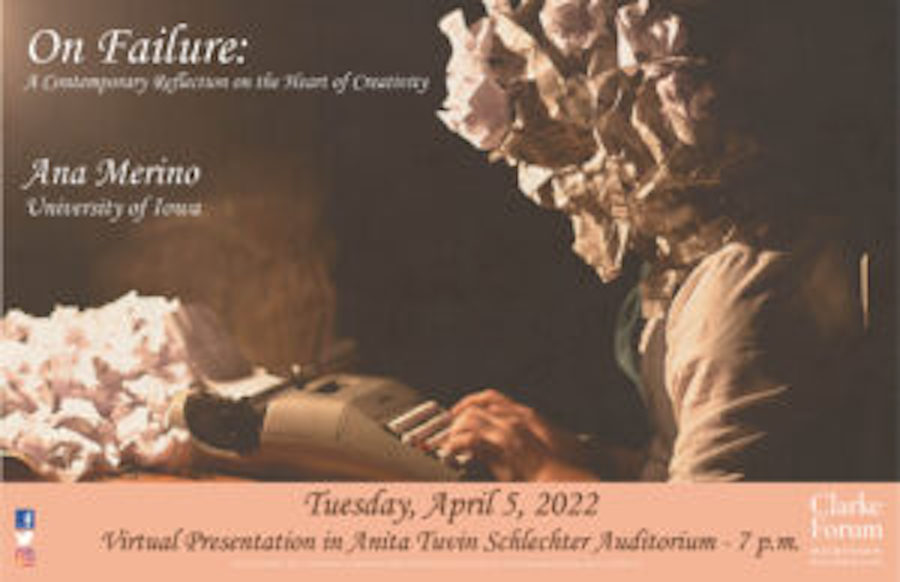 There is an upcoming program sponsored by the Clarke Forum for Contemporary Issues. This event is part of the Clarke Forum’s semester theme, Failure, and will take place on Tuesday, April 5, 2022 at 7:00 P.M. in Anita Tuvin Schlechter Auditorium.

Ana Merino from University of Iowa will provide a literary reflection on the different ways the notion of failure has been a creative space. Merino will examine the life of Miguel de Cervantes and his universal character, Don Quixote, then move to the twentieth century, the tragedy of exile in the aftermath of the Spanish Civil War, and the fragility of poets confronting pain and fear in challenging times.

Biography (provided by the speaker)

Ana Merino is an award-winning writer and a professor of Spanish creative writing and cultural studies at the University of Iowa, where she founded the Spanish MFA. She has written extensive criticism on comics and graphic novels. She has authored two academic books: El cómic hispánico and Diez ensayos para pensar el cómic and a monograph on Chris Ware. Merino has curated five comic book exhibitions and edited several volumes on the topic. She was a member of the ICAF (International Comic Arts Forum) Executive Committee from 2001–2011 and a directors board founder member at The Center for Cartoon Studies from 2004–2014.