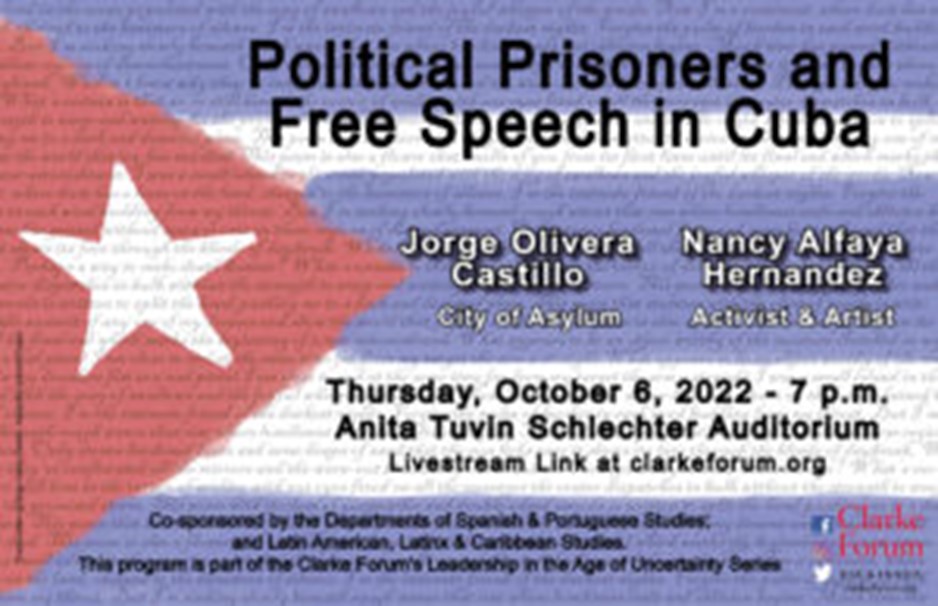 Jorge Olivera Castillo is a Cuban poet, writer, television editor, journalist, and songwriter. He is a well-known dissident, and his work has been banned in Cuba. Jorge has published six books of poetry and two short story collections in Spanish. His works have been translated into several languages, including Czech, English, Italian, and Polish. Jorge recently finished two books: a book of poetry and his third collection of short stories based on his experiences as a soldier in the African jungle during the Angolan Civil War. He is married to Nancy Alfaya Hernandez, a Cuban human and women’s rights activist. He and Nancy have been in residence at City of Asylum since November 2021. Jorge was formerly a Scholar-at-Risk at Harvard University, Brown University, and University of Nevada Las Vegas.

Nancy Alfaya Hernandez is a Cuban activist and artist. Nancy is a founder of the Ladies in White (Damas de Blanco) movement that organized for the release of political prisoners during Cuba’s Black Spring in 2003. From 2004-2014, Nancy was the community project leader for “Mujer No Dejes Tu lugar” (Woman Don’t Leave Your Place) to fight against domestic violence. From 2014-2018, Nancy served as Coordinator for the Women’s Network for Equality with the Citizen Committee for Racial Integration (CIR) to advocate for women’s rights and empowerment and against violence and discrimination with a focus on women of African descent in Cuba. Nancy is currently in residence at City of Asylum Pittsburgh with her husband Jorge Olivera Castillo.

Alive or Dead (Words Without Borders)

Shots in the Dark (The Los Angeles Review)