“The anger expressed on the street has also shown how Iranians feel about the omnipresent so called ‘morality police’ and compulsory veiling laws. It is high time for these discriminatory laws and the security forces enforcing them to be completely removed from Iranian society, for once and for all.” – Heba Morayef, Amnesty International

This blogpost contains content, both written and visual, that maybe disturbing to the reader.

While traveling with her family in early September, Mahsa Amini, 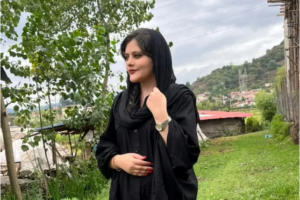 a 22-year-old woman, was detained by the “morality police” for “improper hijab” and later died in their custody suffering a stroke and cardiac arrest. Amini was seen in a “guidance centre”.

A place where the education on modest clothing is taught. This includes the mandatory instruction on wearing a hijab. She is then shown on footage talking with an “expert” at the centre before holding her head and collapsing. There were no other recording devices between her arrest to eventual death other than the on in the centre.

Statements from her family say that Amini was in good health before she died. The “morality police” is responsible for enforcing Iran’s dress code, most notably for the wearing of headscarves in public for women. The police unit has been known to use excessive force to enforce these strict dress codes. Mahsa Amini was a victim of the violent oppression faced by women in Iran by the “morality police”.

The  death of Mahsa Amini sparked public protests and demonstrations in Iran including student protest at the University of Tehran and then later at several other schools.

In these acts of protest, Iranian women are cutting their hair and taking off their hijabs and burning them. Protestors are also destroying images of the supreme leader and confronting the police forces demanding freedom. These protesters are directly criticizing the government, its laws, and the strict dress code, specifically referring to the hijabs. They are calling for action and for change while screaming, “death to the dictator”.

As of now, 154 protesters, including 9 children have been killed by security forces during the protests in Iran following the death of Mahsa Amini (these numbers fluctuate between various news articles).

Nika Shakarami was a 16-year-old girl who joined the protest towards the end of September. She went missing for ten days before her body in the morgue at a detention centre in the capital. Nika’s aunt stated that they were not allowed to see the body only her face. “Authorities said she died ‘falling from a height’… Her aunt said later that her nose and skill were smashed, apparently by multiple blows to her head.” . The most disturbing part of this act was the Iranian security forces stealing her body and having it buried in secret in fear of sparking more protests. Her family was able to move her and hold a funeral where hundreds of protestors gathered and shouted “death to the dictator”.

Social Media and What This Means for Expression

Social media has become a popular tool for the masses to address controversies, express opinions, and connect with others across the world. TikTok and Twitter in particular have become sites where protestors have found spaces to share information about issue effecting their community and where they can find allies to their causes. Iranian protesters have shared videos of marches and acts of resistance through the internet in order to spark conversation about the injustices faced in the country.

In response to the protests happening across Iran, the Iranian government has instituted an internet shutdown. An internet shutdown is an, “intentional disruption of internet or electronic communications, rendering them inaccessible or effectively unusable…”  This inability to access popular social media sites such as Meta (Facebook), Instagram and WhatsApp has left protestors fearful at the extent the government will go to censor these acts of expression and protests.

Not only does this shutdown stop protestors from spreading information about the state of their country and the injustices they are facing, but it also denies them even the ability to communicate with family and friends. This internet shutdown or disruption is deliberate. The government is putting in effort to silence the Iranian people from voicing their grievances and opinions, a direct violation on expression. However, this shutdown has not slowed the protests in Iran as the government thought it would.

Around the world, protestors have marched in the streets and women have cut their hair and burned scarves and hijabs in solidarity with the women of Iran. 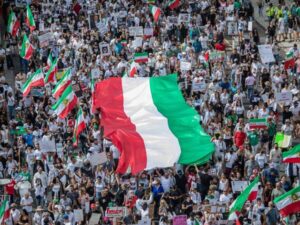 Demonstrators hold Iran’s flag during a protest for Mahsa Amini who died in custody of Iran’s morality police, in Los Angeles, California, on October 1, 2022. – Amini’s death after her arrest by Iran’s morality police has sparked a wave of unrest since the 22-year-old died on September 16 after her arrest for allegedly failing to observe Iran’s strict dress code for women. The street violence has led to the deaths of dozens of people — mostly protesters but also members of the security forces — and hundreds of arrests. (Photo by APU GOMES/AFP via Getty Images) 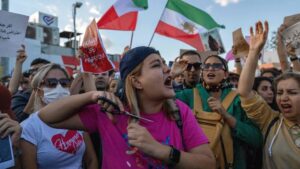 A protestor cuts her hair during a demonstration against the Iranian regime and in support of Iranian women, after young Kurdish Iranian woman Mahsa Amini died after being arrested in Tehran by the Islamic Republic’s morality police, in Istanbul on October 2, 2022. – Hundreds of protesters took to the streets in Turkey on October 2 to condemn Iran’s crackdown on women-led demonstrations, in which least 92 people have been killed, sparked by a young woman’s death after her arrest by the country’s notorious morality police. Kurdish Iranian Amini, 22, was pronounced dead on September 16 after she was detained for allegedly breaching rules requiring women to wear hijab headscarves and modest clothes, sparking Iran’s biggest wave of popular unrest in almost three years. (Photo by BULENT KILIC/AFP via Getty Images) 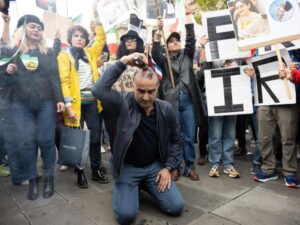 A man shaves his head in protest during a demonstration in support of Kurdish Iranian woman Mahsa Amini during a protest on October 2, 2022 on Place de la Republique in Paris, following her death in Iran. – Amini, 22, died in custody on September 16, 2022, three days after her arrest by the notorious morality police in Tehran for allegedly breaching the Islamic republic’s strict dress code for women.  (Photo by STEFANO RELLANDINI/AFP via Getty Images)

If there are ways you know of to help the protestors in Iran please place it in the comment section.