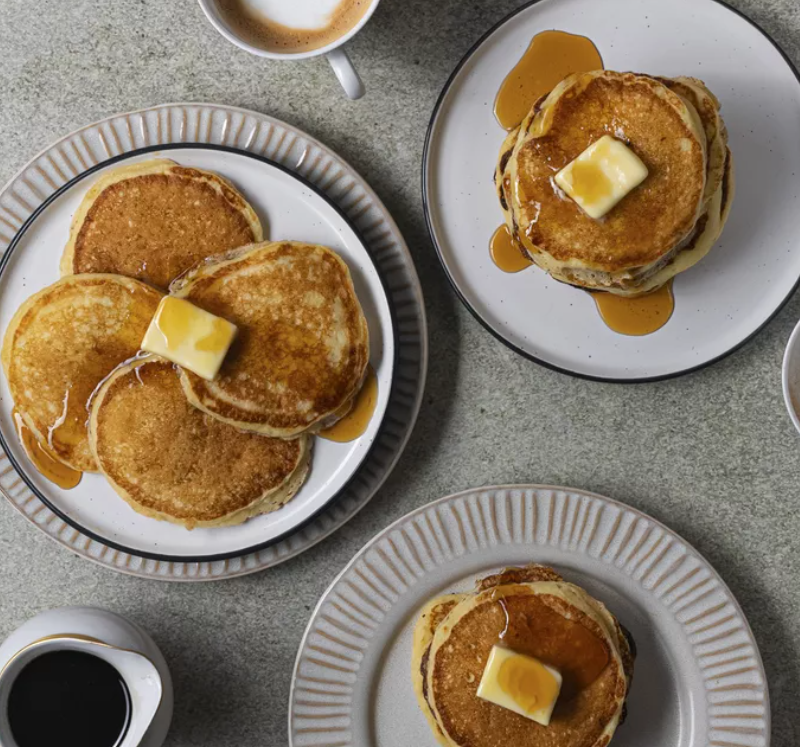 This is a food blog made by Emilio Gurany

Recipe at a Glance

Buttermilk pancakes are a staple among households, being an easy to make food item that tastes great and is incredibly versatile. In essence, pancakes are a quick rising bread, but a side-effect of the leavening agent, baking soda, is increased Maillard browning. To many, this is a desirable quality, and the amount of baking soda used can correlate to how much browning the pancake undergoes.

Modifications to the recipe

Dry Pancake Mix For Each Batch of Pancakes

Dry Pancake Mix For Each Batch of Pancakes

The science behind each ingredient.

All Purpose Flour - The purpose of the flour is to provide a source of gluten formation in the recipe. Gluten is what creates structure in baked goods, and is formed when glutenin and gliadin come into contact and form bonds. This is usually done by adding water to the flour and mixing (6). The gluten formation also traps the carbon dioxide gas released by the leavening agents, giving the pancake its rise (4).

Baking soda - Baking soda, sodium bicarbonate, is an alkaline powder that when combined with an acid and a liquid, will react and release carbon dioxide, which gets trapped in the batter and gives pancakes their rise. The baking soda will not react if there is no acid present, in contrast to baking powder which contains an acid in it (4). The main purpose behind these leavening agents is the release of carbon dioxide, and the same effect can be achieved using dry ice, which is carbon dioxide in its solid state. The phase change to gas creates the same effect, giving bread its rise (2).

Kosher salt - Salt is used to enhance flavors and counteract the sugar.

Sugar - Sugar is used to sweeten the recipe.

Eggs - The purpose of the eggs is to help set the pancakes as they cook, and provide some extra lift (4).

Buttermilk - Apart from flavor, the buttermilk provides the acid necessary for the baking soda to react and release carbon dioxide gas. Given the high alkalinity of the leavening agents used, the acidity of the buttermilk also helps to balance that out (4).

Sour cream - The sour cream is an alternative acid to the buttermilk. The advantages of sour cream are that it is more acidic but less moist than buttermilk, which allows for more acidity in the recipe without watering it down (4).

Unsalted butter - The butter contributes fat to the recipe, which beyond flavor, limits gluten development by coating the flour. This keeps the pancakes more tender and less stiff (4).