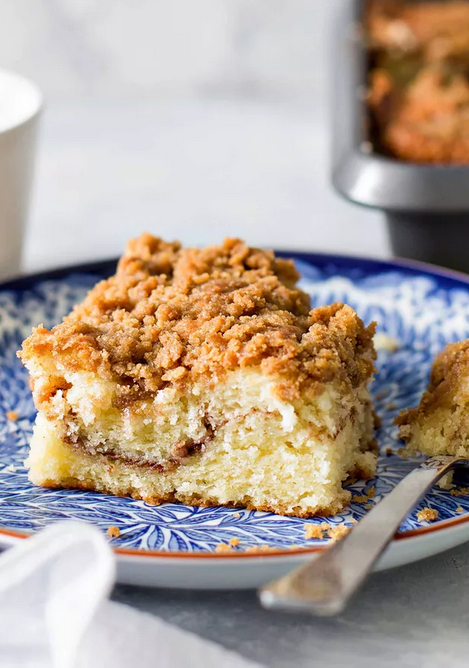 Coffee Cake is a crumbly, moist dessert cake. The coffee cake recipe, I use here, features two cake layers separated by an additional layer of cinnamon, topped with a streusel topping. Specifically, the baking process and ordering of ingredients contribute to the makings of this signature dish. In reference to heat, the temperature and time of baking plays an integral part in how the cake rises as well as helps construct its signature texture. The ordering of ingredients helps ensure that the cake does indeed rise, and that the batter maintains a smooth and desired texture.

The oven is heated to 350 °F to promote Maillard reactions without the production of isoacchrosan or caramelen. Maillard Browning helps to contribute to the desired resultant flavor. However, caramelen has a bitter taste and results from the excessive dehydration of sucrose at temperatures above 392 °F. Since ovens may vary in temperatures, 350 °F gives enough range to encourage Maillard reactions without overly dehydrating the product. And since Fructose caramelizes at about 230°F, this temperature allows for some caramelization to occur due to the table sugar. (Field 2012a) (Asmi 2019)

The streusel layer produces a crumbly texture because of how the flour interacts with the butter and sugar. Both the flour and butter are generally insoluble in water due to their nonpolar structure. Since nonpolar substances attract other nonpolar substances, the nonpolar molecules in the butter surround the flour components (starch, proteins, and lipids). This part of the recipe uses brown sugar, which introduces water to the mixture. Rather than dissolve the flour, water and flour react to form gluten. However, since nonpolar, oily molecules already surround the flour, this reaction is restricted. Together, these competing forces result in a crumble, unstable texture. (Al-Dmoor 2013) (Provost 2016a) (Provost 2016b)

The dry ingredients are mixed separately from the wet ingredients because of how flour and leavening agents react with water and the sour cream. Flour, when mixed with water, begins to form gluten. It would be undesirable for this reaction to occur without the introduction of heat to solidify the cake in a new shape. In other words, the formation of gluten at this stage would prohibit the cake from rising. Baking powder will begin to react when in an aqueous solution. Similarly, baking soda will react in the presence of an acid, such as the sour cream. At this stage in the recipe, mixing these will cause the reactions to occur before the cake is able to stabilize. In short, the cake may not rise otherwise. (Field 2012a) (Provost 2016a)

A whisk is used in this step to aerate the mixture and pull apart the intermolecular bonds within the ingredients so they can mix. Together, the wet ingredients add a mixture of polar and nonpolar substances as well as emulsifiers to the recipe. Fats in the milk and cream do not easily mix with polar molecules such as water. However, the proteins in the milk and eggs work as an emulsifier, which makes it easier for polar and nonpolar to come together. When mixing the dry and wet ingredients, the resultant cake batter is a foam. This means that the continuous phase is a liquid, while the dispersed phase is a gas. It is important not to overmix the batter because chemical reactions begin to take place as soon as the wet and dry ingredients are combined. These reactions include gluten formation and the activation of the leavening agents. If overmixed, these reactions with have occurred prior to the baking process, and the cake will not rise. (Field 2012b) (Provost 2016b)

While baking, many chemical processes undergo at the same time. The baking soda reacts with the acidic sour cream to produce carbon dioxide and water, while the baking powder, now in an aqueous solution and in the presence of heat, begins to produce carbon dioxide as well. The water in the recipe also has a leavening effect as it undergoes a physical change from a liquid to a gaseous form. While the leavening agents leaven, gluten formation starts to occur between the glutenin and gliadin in flour and the surrounding water. As gas is produced and moves up out of the foam batter, the gluten works to contain the gas, and the cake rises. The proteins in eggs play a similar role as the gluten. When heated, these proteins denature, or unravel somewhat. As the product cools, these proteins ravel once more, albeit in an altered shape. For this reason, it is important to let the cake cool before serving. The structure of the cake does not fully set until the proteins reform into the newly risen shape. (Asmi 2019) (Al-Dmoor 2013) (Field 2012a) (Field 2012b) (Provost 2016a) (Provost 2016b)

All of this considered, I proposed to change the cooking time of the coffee cake recipe. Since coffee cake is famed for being crumbly, sweet, and toasty, I had intended on testing conditions that might bring out more of these attributes. However, these results were not achieved. After raising the cooking temperature to 400 degrees Fahrenheit and maintaining the same cooking time, the Coffee Cake was notably harder and more solid. Additionally, the end product was significantly more dry. It would appear that at higher temperatures, the rate of evaporation increases such that the cake looses too much moisture and begins to burn.

Provost, J. J.; Colabroy, K. L.; Kelly, B. S.; Wallert, M. A. The Real Shape of Food: Molecular Basics. In The Science of Cooking: Understanding the Biology and Chemistry Behind Food and Cooking, John Wiley and Sons, 2016; pp 29-35. https://ebookcentral.proquest.com/lib/dickinson/reader.action?docID=4530809&ppg=49