Geography and Population of Lebanon 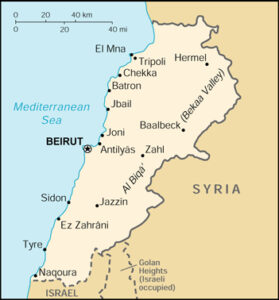 Over Five million people live in Lebanon, with almost half of that population living in Beirut, the capital of Lebanon. The capital sits on the coast of Lebanon, where a large majority of the population lives, even if they are outside the capital city. Of the five million people in Lebanon almost one fifth of that population consists of refugees, most of whom are from Syria; Lebanon therefore contains the largest refugee population per capita in the world according to Carla E. Humund’s acticle “Lebanon.”

While most of Lebanon is fairly warm year round, Mount Lebanon, a large and iconic mountain in the country receives sizable snow falls. The rest of the region does not receive much snow even though the region does experience significant dips in temperature in the winter compared to the summers which are hot.

According to The World Factbook, the majority of the land in the country is for agricultural purposes. Nearly two thirds of the land is set aside for farming. Some of the main crops consist of potatoes, lemons, oranges, and cucumbers.

After World War I, Lebanon’s modern boundaries were drawn up largely by French powers and a French mandate gave the French control over the region. After many protests for independence, Lebanon was granted independence over their country in 1943, over two decades after the French mandate.

However, despite not receiving recognized independence until 1943, Lebanon had already drafted their own constitution in 1926, and had their own national anthem in 1927. Before they had been officially relieved of French control, Lebanon had already begun to exercise control over itself as it began to create the foundations for its national government. A great source to learn more about Lebanon and their journey to independence is Traboulsi’s A History of Modern Lebanon- Second Edition.

Under The World Factbook, a great resource to learn about Lebanon, the country is listed as a parliamentary republic. The country has both a president, prime minister, and a parliament. The president is chosen by the parliament, while the prime minister is elected by the president. While Lebanon is an extremely diverse region, especially religiously, the main religious groups of the country exercise the most influence in government and contain the most control in government. Those groups are Maronite, Christian, Sunni Muslims, and Shi’ite Muslims.

From 1975-1990 Lebanon experienced a civil war that resulted in over 100,000 Lebanese casualties. After the war the country experienced several years of political unrest, and the economy suffered longer still from the extended period of war and political turbulence.

Another major dispute is the still ongoing border dispute Lebanon has with both Syria and Israel.

As previously mentioned, Lebanon is an extremely diverse region with The World Factbook citing seven notable different religious populations and that is not including different denominations. The majority of the population is Arab, with over ninety percent of the population counted as Arab. Consequently, the official language of Lebanon is Arabic. However, many other languages are popular. French, Armenian, and English are all listed as notable languages in the country.