For my blog I will be writing about the state of Yemen. I chose Yemen as my country of focus because it is the Middle Eastern state that I find myself most interested in historically. While I don’t have as deep an understanding of Middle Eastern History to date. One area of world history that has always intrigued me has been anything that had to do with the Roman Empire. Specifically, I can recall watching a docu-series pertaining to the Romans history in Arabia and I remember them referencing what is present day Arabia Felix, or “Flourishing Arabia”, alluding to the prosperous nature of the land. Fast forward to today, it is interesting yet at the same time heartbreaking how a lingering humanitarian crisis all across Yemen, due to the countries ongoing civil war between the ashad al-Alimi -led Yemeni government and the Houthi armed movement is now what I associate with this once prosperous land. In my blog I will specifically cover current events in Yemen and try to associate how historical roots have played a pivotal role in shaping the state into how it is today.
A Brief History
A center of trade and commerce within the Arabian Pennisula, Yemen has always served as a melting pot of people and religions. It wasn’t until Islam was introduced to the region in the 6th century AD that the state became overwhelming Muslim (99.1 percent of Yemeni identify as Muslim as of 2021 according to Countries – The World Factbook (cia.gov)). At the same time as this Islam swept over Yemen, Imans a subsect of Islam implemented theocratic rule in the Northern part of present day Yemen, a series of events that still have lingering effects to this day. 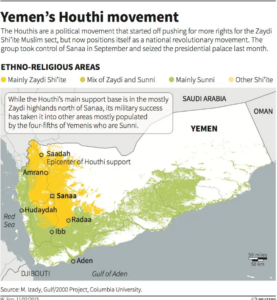 It was also at this time that today’s capital Sana’a and the key Yemeni port, Aden, blossomed into important trade centers connecting Europe to Asia.

It wasn’t until the 19th century that Yemen’s current political figure began to take shape. The Ottoman Empire eventually gained control of Yemen along with much of the rest of the Arabian peninsula. In 1832, soldiers of the British East India Company captured Aden. In 1904, the Ottomans and the British struck a deal , carving Yemen into an Ottoman Northern territory and a British Southern territory. When the Ottoman Empire fell at the end of WW1, its portion of Yemeni territory became an independent kingdom. Arab nationalists took over the ruling monarchy in 1962 with Egyptian help to create a republic but a civil war with Saudi-financed royalists raged for almost a decade thereafter.

The British claim to Yemen lasted until 1967 when it was pressured out following a violent insurgency. Directly following Britain’s departure, “a faction of radical Marxists took over in 1970, South Yemen became the People’s Democratic Republic of Yemen and was propped up by a crew of communist backers, the USSR chief among them.” The two Yemeni states soon formed a united republic in 1990, but their political differences have since been marked by decades by internal unrest, assassination attempts and a military coup. Not long after unification, disputes over power led to leaders from the South declaring a separate state, but a ruthless campaign in May 1994 quashed this rebellion.

Unfortunately, poverty and corruption along with a very weak rule of law form the conditions for al-Qaeda’s to thrive in Yemen. Much of the country is still divided along local tribes, which further complicates dealing with the rebellions of separatists such as the Shi’ite Houthi. Within this chaos, the U.S. has reportedly embarked on a CIA-led covert war. As it stands today, Yemen is a country riddled with many long-running internal tensions and diverse problems resulting in a mass humanitarian crisis. Hopefully, in researching the state in greater depth I seek to gain a better perspective and can potentially bring about more awareness to a state that is underrepresented in American Media.

One response to “Yemen: An Introduction”