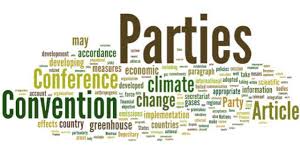 The Ad Hoc Working Group on the Durban Platform for Enhanced Action (ADP) aims to close the gap between emission pledges of countries and the possibility of countries actually having the ability to make the global average temperature to be below 2 °C above pre-industrial levels. In order for this to happen, countries must come to an agreement by getting involved. However, from the start of the UNFCCC negotiations, parties have had a difficult time agreeing on whether to choose a top-down approach or a bottom-up approach.

A top-down approach is more of a contractual approach. Obligations are decided through international negotiations and it is done with targets and timetables. On the other hand, a bottom-up approach is a facilitative approach that lets a country unilaterally decide what they want to do. It is more of a voluntary approach. The bottom-up approach or “facilitative model” of “international agreements starts from what countries are doing on their own, and seeks to find ways to reinforce and encourage these activities. International law can serve a number of catalytic and facilitative functions. Gatherings such as the annual meeting of the UNFCCC Conference of the Parties can focus attention, help raise public concern, and prod states to do more” (Bodansky, 2012). This approach displays the work of countries and what they are doing. There is an assessment of the overall effectiveness. Countries that do not have the financial and technological capacities are not singled out. This approach gives them a better chance to allow greater actions to be taken. It allows for flexibility and inclusivity because it does not require a protocol or international legal agreement unlike the top-down approach (Bondansky 2012). An example of the bottom-up approach would be the Copenhagen Accord and Cancún Agreements. It is only partially committed, not legally binded which increases followers. The fact that it is flexible allows a larger amount of countries to agree to follow an agreement because they are getting what they want. “Bottom-up approaches score well in terms of participation and implementation, but low in terms of stringency” (Bodansky, 2012).However, flexibility is an issue because it gives countries a way to do less towards climate change since they decide what they will do.

The Kyoto Protocol is an example of a top-down approach for mitigating climate change negotiations. The issue with this protocol is that developed and developing countries could not come to an agreement when negotiating the protocol. The top-down approach enacts regulations explicitly but has issues with participation and implementation (Bodansky, 2012). The mixed-track approach is a fusion of both top-down and bottom-up approach. However, I believe that the bottom-up approach is the best because it starts at an individual level. It may create a division and that may be a weakness for it but the fact that a country is willing to do something is better than nothing. Arguing to negotiate on climate change will not stop it or reduce it. Taking even the smallest bit of action will. We need implementation and participation as well as fast action by the government to reach the 2020 goals of the ADP.