It only made sense that we end our semester long climate change adventure visiting some of the most incredible sites provided by Mother Earth, or “Pacha Mama” known as by the Quechua indigenous people of the Andes. After our experiences at COP20 chasing down delegates, collecting and trading business cards, shuffling from meeting to meeting, and escaping the heat (from both inside and outside the plenary) with some gelato, it was exciting to visit ancient sites that climate change could prohibit future generations from enjoying. I considered myself lucky to be able to visit Machu Picchu, one of the Seven Wonders of the World, where within the next year the Ministry of Culture in Cusco has decided tourism will be restricted to a certain number of visitors who must be accompanied by an official guide. The ancient Inca city of Machu Picchu is a gold mine for Peru’s tourism industry. Our guide, Hamilton, informed us just the 1Sol fee to use the bathroom generates 6,000 Soles per day. This tourist attraction is huge part of Peru’s economy and they would never close it, but it is sad to see that years of previous human degradation will restrict future generations to enjoy one of Mother Earth’s marvelous sites. This same concept applies to the Earth’s changing climate, years of environmental degradation caused by previous generations of humans is changing how future generations will be able to live on our shared planet. My experience at COP20 was both optimistic and skeptic. While it is optimistic to see progress in negotiations and progress in the use of sustainable technology, there is still a long way to go until we reach a global participation and agreement. Every year there is this extravagant event where representatives from each party meet to discuss what needs to be done to save the planet. However, much of this event is excessive and wasteful, which makes it seem counterproductive. But I am certainly invested in following the road to Paris and beyond. Thus far our time in Lima has been spent sightseeing, for both people and places. We have been spending our days at Voces por el Clima interviewing delegates and representatives from various countries, Peru, Bolivia, Netherlands, and the Democratic Republic of Congo to name a few. While also exploring Lima outside of COP venues, we continue to run into party members and representatives. We were fortunate enough to have dinner with Gabriel Blanco a delegate from Argentina who has attended 9 previous COPs. Through a more relaxed interview involving cebiche and cerveza, Señor Blanco held nothing back about Argentina’s insufficient climate action. While it was surprising to hear about Argentina’s climate denial, it was even more surprising to me that Argentinas government continued to send delegates to a convention in which the argentine people had very little commitment towards. Leaving that dinner was a bit frustrating to hear that despite this being the twentieth conference of the parties, some governments are still in disagreement about the changing climate which is greatly impacting the lack of education for its citizens. Therefore a cycle of negligence occurs. However, Gabriel Blanco seemed somewhat optimistic for the outcomes in Lima, and we told him we will come to Argentina to help change the minds of the many Argentines who remain apathetic towards climate change. Is it just me or does Morgan Freeman’s distinctive voice make anything sound possible? Freeman does just this through his narration of the short film What’s Possible, which was presented to the 2014 UN Climate Summit in New York a few weeks ago. This short film expresses global concerns through magnificent images in under 4 minutes. Morgan Freeman points out we already have all the technology we need in order to solve climate change. Now we must get our world leaders together to take action. This short film shows we have already done half of the work through developing groundbreaking technologies fostering sustainability, now we must have a cooperative approach towards governance.

Having a pessimistic view on climate change is the world’s demise. The people who think it is too late to act on climate change must realize everything we need is right here with us. We must be optimistic in order to change towards more sustainable ways. We have the capability to destroy this planet (which we are) but we have an even greater capability to save it. It is up to us to take action, this is our problem!

Watch the sequel to What’s Possible, A World of Solutions!!

Tuesday morning actor Leonardo DiCaprio addressed world leaders at the UN Climate Summit. What was this product of hollywood doing in a room full of heads of states? Well, he compared his acting career of “pretending for a living” and “solving fictitious problems” to how humankind is confronting climate change, pretending it is not happening to our planet. I’m sure many of us has seen hollywood “climate-fiction” films such as The Day After Tomorrow, but we must be able to differentiate fact from hollywood’s fiction. Is getting the fictitious world of hollywood involved in the fight against climate change an effective wake up call? How do we get the people to stop pretending and face reality? 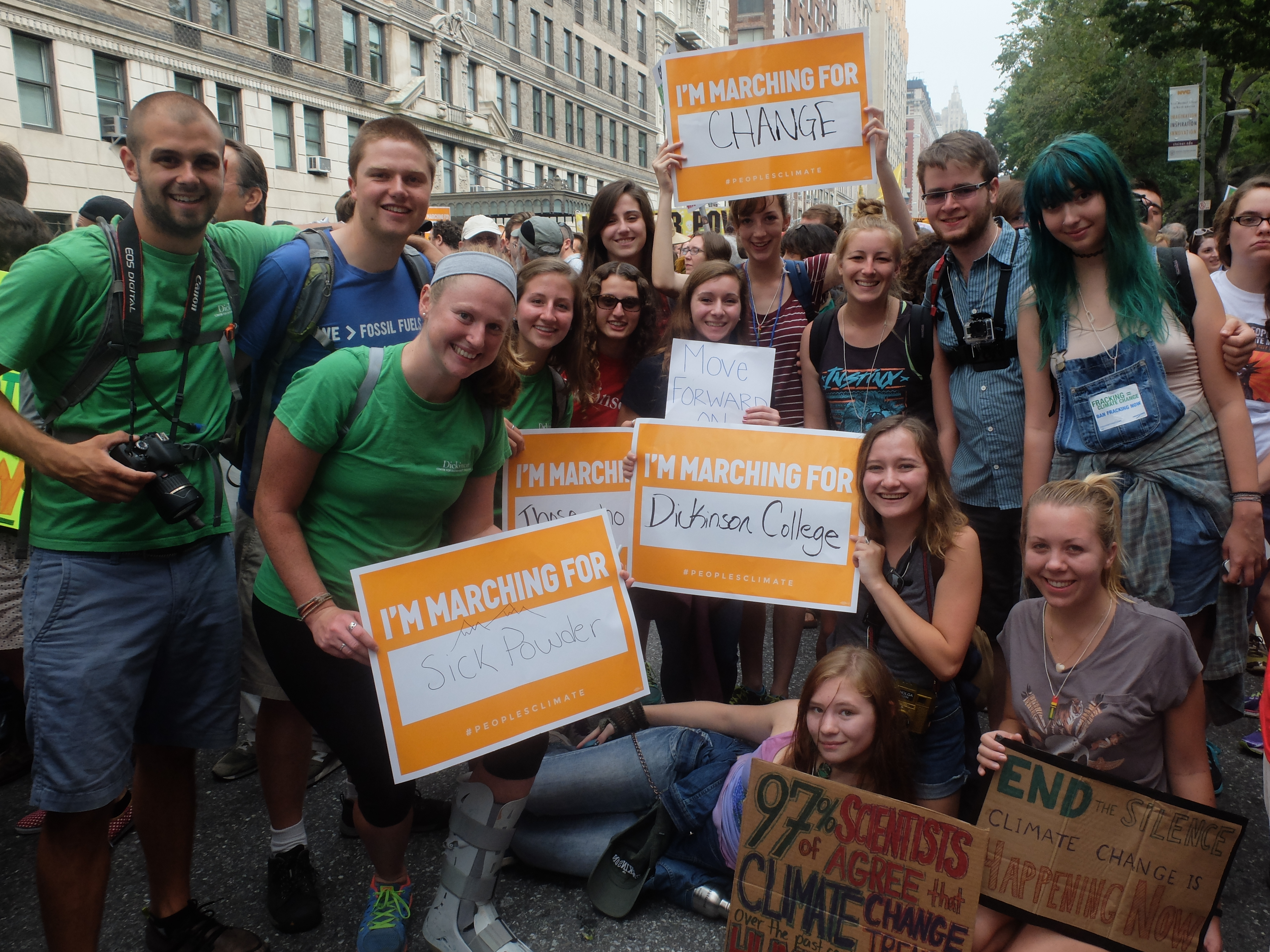 For as long as there have been humans, there has been conflict and attempts to remedy it. These attempts have been in the form of treaties, intergovernmental organizations, or merely a compromise between two people. The League of Nations was a notable example of an attempt to remedy global conflict. Formed in the aftermath of World War I to foster international security and sustain peace. It was notable in that it represented a fundamental shift from the diplomatic philosophy of the preceding hundred years: The League lacked an armed force of its own and depended on member countries to enforce its resolutions and provide an army if needed. The League of Nations ultimately failed, but it inspired a myriad of intergovernmental organizations post-World War II, among them the United Nations (UN), the European Union (EU), the North Atlantic Treaty Organization (NATO) and the International Monetary Fund (IMF). All of these organizations were created to in some way forge a more peaceful world.

The Intergovernmental Panel on Climate Change (IPCC) is an intergovernmental body under the UN, created in 1988 to assess scientific information relevant to climate change, its impacts, and options for the mitigation of it. The creation of the IPCC was obviously a huge step forward in combating global climate change, as it brought together the ideas of independent scientists in separate fields around the world in an institution devoted to the full-time study of climate change and the addressing of urgent policy questions. But the creation of the IPCC might have been just as important in areas unrelated to climate change.

Stephen R. Weart only mentions it only in a very short, two-paragraph section in his book, The Discovery of Global Warming. But as an international relations major, this short section stood out to me. It discusses the IPCC as being an important player in the promotion of world peace.

One of the problems that international organizations have in creating more peaceful relationships between countries is that all member countries will naturally have conflicting national interests. Just look at the US and Russia—the US has vetoed 14 UN draft resolutions, and Russia has vetoed 11. Realist theory dictates that all states will act in their national interest and increase their power, even at the expense of other countries, because this is the only way for states to ensure their national security in an anarchic system—to become the most powerful state in the system. International institutions were created as a way to mitigate this anarchy, but as long as states remain sovereign the international system remains anarchic.

What makes the issue of global warming different from many other issues that the UN deals with is that the slowing of climate change is mutually beneficial to all countries. While it might not be in all countries; interest to allow Ukraine to join the EU, or to drive Bashar Al-Assad out of power in Syria, it is in all countries interests to mitigate global warming because the effects of a warmer climate on areas such a as a country’s economy, population and on the global food supply will be devastating. Getting countries to work cooperatively on an issue that is mutually beneficial is far easier than getting countries to work together on issues that are more decisive, and countries that cooperate form better relationships and will be less likely to come into conflict with each other. Why are we more scared of North Korea than of the UK, even though the UK has far more nuclear capabilities than North Korea? The UK theoretically should be a bigger threat to us than North Korea, but because we have a good relationship with the UK, we aren’t worried about coming into conflict with it. If these beneficial relationships can be formed between countries through cooperation on an issue that is mutually beneficial, it could be possible to foster more peaceful relationships in the international system. Of course, there are many other problems that must be dealt with before a lasting peace is achieved, but the IPCC could definitely play a major role in creating a lasting peace in the future.