A theme that is brought up over and over again in The Girl With The Dragon Tattoo is that the financial circumstances-be it success or shortcomings- play a large role in the motive in which characters operate under. However, one particular faction represents the common financial status that justifies her modus operandi only to not realize that what she desires is not what she really wanted.

Representing the “norm” of the financial status we have Lisabeth Salander, classified as mentally ill and thus has no authority over her assets while such control is delegated to another individual in which he or she will inherit complete control of such aspects of her life. Due to the death of her previous guardian she is assigned Bjurman, a sadistic pervert. On paper, Salander is a financially stable citizen who works for Milton Security. However, because of the classification that is forcefully attached to her records, she is under Guardianship, a type of control that easily falls victim to malevolent individuals such as Bjurman. Knowingly so, Bjurman takes advantage of the Guardianship system by eliciting sexual favors from Salander in exchange for granting Salander allowance. As a result, Salander retaliates by raping Bjurman. This type of reaction is abnormal to say the least. A “normal’ person would remain shocked for a period of time and likely be afraid of the individual who has taken advantage of them. However, Salander is far from normal. She is unshaken by the rape and rapes Bjurman. So why does she do so? Simply put, she needs the money.

However, her reason to acquire more money contradicts the style in which she works under. Salander is a freelance agent at Milton Security and as such she accepts jobs only as needed as said jobs are enough to cover her expenses. But things just do not add up if we juxtapose this with the reason she desired money from Bjurman and the frequency she works. Salander wants the money for the new computer that she desires but  her personal savings does not cover the cost of the new computer. This predicament brings into question why Salander only accepts the jobs that she wants to if she needs money. Examining this from a liberty standpoint, the answer frees itself from the darkness that is surrounding this behavior. Salander works the jobs she wants to so that she is able to control how she wants to spend her time, working only when she wants to work. All her life, people have tried and failed to understand her. But in the process of doing so, she was institutionalized for psychiatric evaluations, a type of deprivation of freedom that has deeply affected her current life. She likes freedom and no one is going to take it away from her. Part of the reason why she “got along so well” with her previous guardian was thanks to the ability for her to roam and live how she wanted to live. In essence, Salander thought that she needed money but what she really wanted was freedom; with freedom, money is no longer an issue. 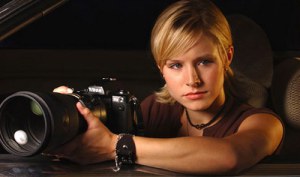 There is obvious tension between Irene Adler and Sherlock Holmes as both individuals are more perceptive, intelligent, but above all mysterious than the average citizen. As a Chinese proverb goes: “a mountain cannot house two tigers,” Holmes and Adler are both bold and occasionally reckless when executing their plans.

However, there are similarities between the two when both are on screen in succession. For example, the first instance where this happens is when “both” of them are naked. We see Holmes covered in a long white sheet while Adler is completely naked shortly after. The sheets play an interesting role here. One, the fact that it is white is ironic as white usually resembles purity and thus nothing to hide. But this is Holmes as he is far from being pure. Instead he is a black hole. He takes in anything but little is known about him other than his gifted ability to perceive everyday objects and routines in detail. The fact that Watson, his partner, cannot read Holmes indicates just how complex he is as a person. Second, along with the deep and mysterious personality Holmes embodies, the white sheet acts as a stark contrast to how is he as a person; the white sheet wrapping around him serves as a visual oxymoron. 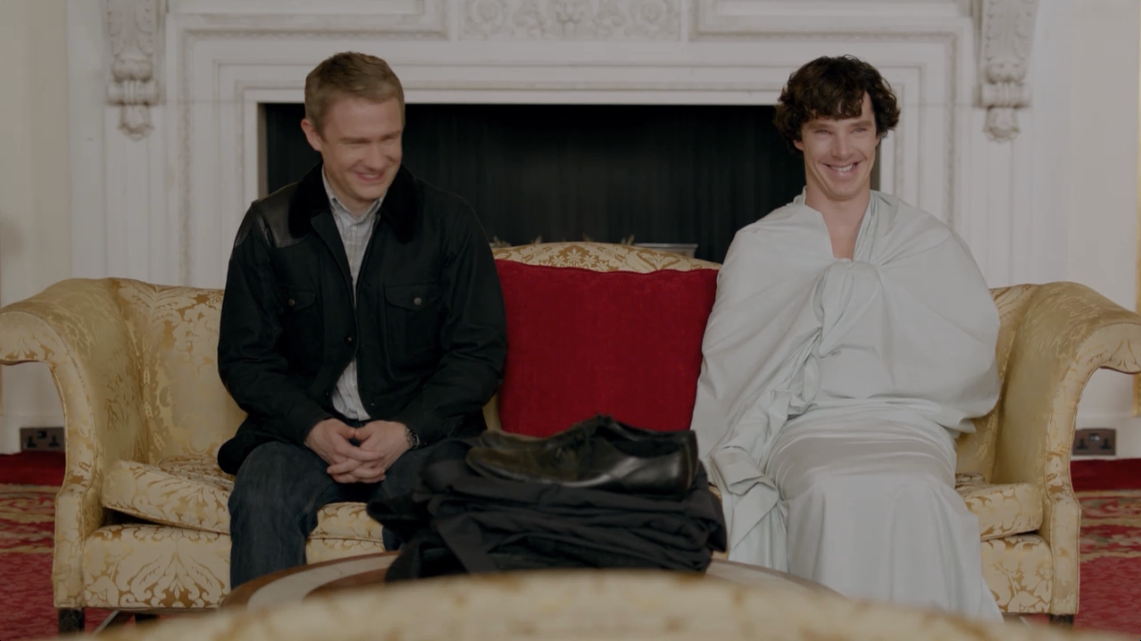 We are then introduced to Irene Adler as the visual evidence continues. When she walks into the room completely naked in front of Holmes, she is doing two things. She is trying to seduce him and to “protect” herself by exposing her entire body. From an earlier scene we can gather that Holmes is about to “read” people as he made observations about people’s behavior and outward appearance. By showcasing herself in front of Holmes scantily clad she is able to shield herself from being read like a “normal” person and disguise her enigmatic personality. 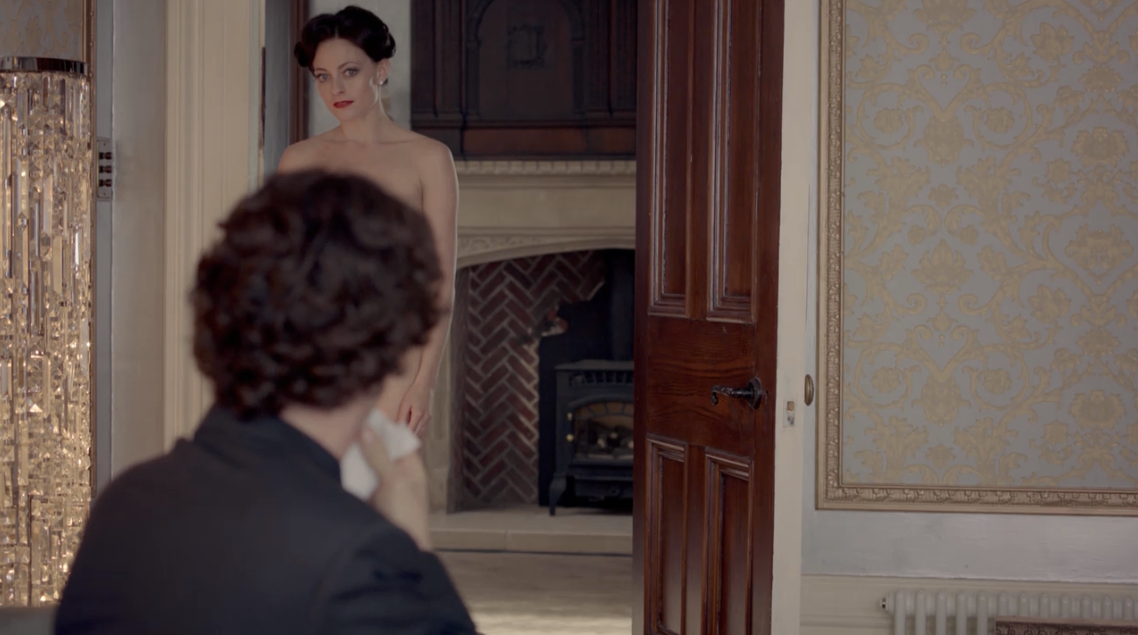 Reaction Paper #2: Making a claim about The Maltese Falcon

Brigid O’Shaughessy is a mysterious actress on the stage of Sam Spade. As such, she is apt at disguising herself and her intentions. When the reader is first introduced to her as Ms. Wonderly, she was a woman desperately in search of  her sister in fear of her safety being compromised. As we later find out, this was all a fluke in an attempt to get Spade to help her in another situation. However, upon closer examination in the way that O’Shaughessy has requested this deed, it foreshadows the mysterious and manipulative nature of her character.

Ms. Wonderly walks into Spade’s office asking for someone to be tailed for the sake of her sister. However, she does not get straight to the point. Instead, she says that because their mother and father are about to return home, she hopes that her sister will be there, all the while referring to her sister simply as “her.” This does not accurately describe the situation a sister would be in if her dear sibling was in danger. We then turn to the fact that she showed no signs of close bond with this said “sister” that she had. However, from her dialogue, we can gather that Ms. Wonderly simply wants the sister to be within her sight.

Fast forward to the two murders that take place and again we see this shadowy and manipulative side of her as she plays the pity card against Spade but ultimately fails. On page 35 when Spade asks for more information on the situation, O’Shaughessy breaks down and tries to get Spade to help her once more. She starts off with “ I haven’t live a good life” and immediately bombards Spade with emotional rhetorical questions: “You know that I’m not all bad, don’t you? You can see that, can’t you? Then can’t you trust me a little? Oh, I’m so alone and afraid, and I’ve got nobody to help me if you won’t help me.” This then leads into forceful request laced with pity: “Help me because I need help so badly, and because if  you don’t where will I find anyone who can, no matter how willing? Help me… Be generous, Mr. Spade. You can help me. Help me.” The constant reinforcement of her plead only loses its effect and gains in pressure as a way to corner Spade into helping O’Shaughnessy despite her unwillingness to spill the beans.

“Spade laughed a harsh syllable, “Ha!” and went to the buff-curtained window. He stood there with his back to her looking through the curtain into the court until she started towards him. Then he turned quickly and went to his desk…His yellowish eyes glittered between narrowed lids.” -bottom of Page 25

The passage starts off with Spade scoffing at the the idea that Iva has presented to Spade. Did he kill Miles? From this reaction, Spade gives off an attitude of an offended stranger. “How dare you think of me like that? Do you even know me?” This reaction almost signifies that Spade thinks that he is too good to kill Miles. What was the benefit? They’re partners, at least they were. However, the latter part of the sentence hints at the possibility that Spade could indeed have committed the aforementioned crime.

Spade then walks to the buff-curtained windows. The curtains covers the windows. Windows by nature behave similarly to a mirror in that it reflects the image in front of it. Is Spade not able to face himself? Why? Because he knew what happened or is it because Iva is in the room? Whatever the answer may be, he ponders this while his back faces Iva until she walks towards him. Spade responds by quickly dashing towards his desk. As we can see, Spade is acting contrary to his usual behavior. He is avoiding Iva and/or hiding something from her. Perhaps gender plays a role in this situation. With men, Spade is the all mighty sarcastic jerk that does what he wants, but with woman, he completely crumbles. In a sense, he is a “glass cannon” in front of a woman. He is able to dish out retorts but is not able to take in successive attacks of questioning; he “breaks” under this pressure.

“His eyes glittered between narrow lids.” Eureka! The shine from his iris indicates that he has thought of a way to combat the frontal attack he is facing. And that is going to back to how he deals with people best; by being a jerk.