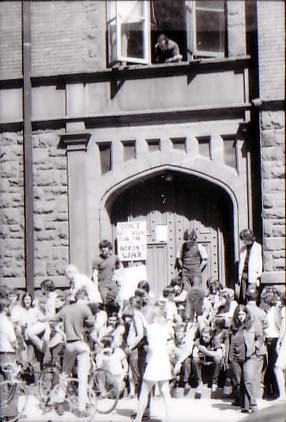 Students protest the Vietnam War outside of Denny on May 6, 1970 (Photo courtesy of Pierce Bounds).

“I’ve never been a radical,” insists former anti-Vietnam War activist Pierce Bounds.[1] In an oral history interview about his years at Dickinson College, Bounds laments the historical treatment of the student anti-war movement of the late 1960s and early 1970s: “There’s been a lot written about veterans coming back and being spat on and I think most of that is urban myth.”[2] Bill Poole, a classmate of Bounds, agrees: “We really played at being hippies and played at being freaks.”[3] Yet the narrative of radical leftist student protest certainly dominates conventional historiography. Popular images of the period depict violent student protest leading to mass destruction of property; film footage features leftist ideologues calling for anti-capitalist and anti-imperialist revolutions.[4] Historian H.W. Brands aligns with this mainstream historical perspective by highlighting the radical organization Students for a Democratic Society as the face of the student anti-war movement. Focusing his analysis on the work of SDS leader Tom Hayden, Brands quotes the organization’s “earnestly provocative” manifesto and links the organization to its most extreme faction, the Weathermen, a group known for their violent tactics of bombing and riots.[5] While Brands focuses on the anti-war movement’s most radical moments, Bounds’ testimony of social change and peaceful activism at Dickinson College seems a world away. Bounds’ unique college experience highlights a movement born not of the radical left, but instead of a generational adolescence that inspired social changes even beyond anti-war activism. Bounds’ memories of student protest culture ultimately complicate Brands’ radical narrative by framing the trajectory of Dickinson’s moderate anti-war movement in the context of a larger generational shift towards new campus norms rather than radical politics.

Bounds’ denunciation of radicalism was rooted in his conservative childhood. While Brands uniformly labels the Baby Boomer generation as solidly liberal, [6] Bounds admits that he supported Nixon in 1960 and even wrote an essay in support of the war in Vietnam during junior high.[7] Bounds’ parents boasted a solid Republican voting record and his comfortable white-collar family had little reason to challenge the status quo. Yet as Bounds was introduced to the working class neighborhoods of Philadelphia, he began to question the political influence of his parents.[8] His growing political consciousness was further fueled by a “wake up call,” when an older peer became one of the first casualties in Vietnam. “The more you knew about [the Vietnam War], the more you realized it was kind of a hopeless policy,” explains Bounds.[9] As the young Bounds witnessed the horrors of Vietnam both in his community and on television, he grew more involved in liberal politics, much to the chagrin of his parents.

Far from dissuading Bounds, the disapproval of his parents merely encouraged his liberal leanings. “All of us baby boomers hit college and we knew we didn’t want to be like our parents,” explains Bounds of the widening generational divide.[10] He and his friends actively sought ways to distinguish themselves politically from their parents. Bounds and his friends liked “irritating our elders” by flaunting a copy of Chairman Mao’s Little Red Book. “I never read it. Most people never read it. But we loved to hold that little red book,” Bounds reminisces.[11] Rebellious acts sought to distance the Baby Boomers from what they saw as the Establishment. Judge Edward Guido, a peer of Bounds at Dickinson, recalls the historical context of this division: “Our parents were the World War II generation… and so they didn’t understand how these snot nosed little kids, who had everything handed to them their whole life, couldn’t appreciate [it]. How dare they question authority?”[12] Bounds notes that this resentment could even break families up entirely. While his own parents tacitly accepted his growing liberalism, he recalls that some of his peers were disowned for their involvement in the anti-war movement and other liberal causes.[13] For the Baby Boomers, however, this generational divide was not a burden but rather the primary appeal of liberal politics.

Yet as Bounds left the conservativism of home, he soon found that Dickinson College in 1967 was far from the hotbed of leftist politics described by Brands.[14] Perhaps Berkeley or Ann Arbor were swept up in new liberal attitudes, but changing social norms had yet to reach the sleepy town of Carlisle, Pennsylvania. Dickinson clung steadfastly to the rules of the 1940s and 1950s, mandating strict limitations on student independence. “All of the old rules, social rules were still firmly in place,” remembers Bounds, describing how female students had to obey a 10 pm curfew or else risk “big trouble.”[15] Former Dickinson College President Bill Durden recalls similar restrictions: “We couldn’t go upstairs [in a women’s dormitory]; we would have been, you know, arrested or something.”[16] Dickinson’s harsh policies represented the last vestiges of an age of institutional conservativism. As Bounds arrived on campus, so did major social and cultural upheavals.

At first, these new liberal impulses represented only a minority of Dickinson students. Bounds notes that the vast majority of his peers were far removed from the hippie ideal remembered in survey histories. Among “the fringe,” however, anti-war and anti-Establishment sentiment had begun to flourish. Bounds reminisces fondly about the “back of the dining hall culture,” where artists, musicians, hippies and protesters smoked cigarettes and chatted for hours.[17] “We were young kids and we were full of piss and vinegar,” remembers Poole, recalling that he and his friends in the fringe were eager to protest just about anything.[18] During his freshman year, Bounds describes the liberal factions of the school as a secluded minority.

Yet it wasn’t long before the national move towards liberalism infiltrated the campus mainstream. Soon, even bastions of conservative culture like the fraternities and ROTC started to challenge social norms. The sexual revolution arrived at Dickinson shortly after Bounds’ arrival, challenging gender roles and catalyzing protests for co-ed dormitories.[19] Recreational drug use grew more common, as the administration frantically tried to prevent the spread of drug culture: “Marihuana [sic] is part of the student’s environment,” admitted Dickinson’s Drug Education Committee.[20] Bounds also cites an “amazing blossoming of the arts” as inspired students pursued their creative impulses.[21] At Dickinson, the movement towards a more liberal campus was assisted by a wave of younger professors with progressive ideals of education and a relaxed sense of hierarchy. “The professors weren’t necessarily our enemies,” recalls Durden, noting that some even allowed students to call them by their first names.[22] As the college moved gradually toward a more liberal campus environment in late 1960s, almost all students felt empowered to challenge authority in ways that would have seemed impossible just a few years ago.

This new attention to student’s rights culminated in D.E.C.L.A.R.E Day, or Dickinson’s Expression Concerning Learning and Re-Evaluating of Education.[23] On March 5, 1969, the administration announced a moratorium on classes so that students could participate in discussions with faculty. Students hoped to address the conservative academic environment that felt anachronistic among the social and cultural shifts of the late 1960s. “My courses add up to a degree – do they add up to an education?” questioned the front page of The Dickinsonian.[24] In particular, students called for “revision of the school’s grading system, reduction in course distribution requirements, reduction of the course load for freshmen and sophomores, opening of co-educational living units, and a new college government arrangement.”[25] The college began a rapid institutional shift to catch up with the new culture of the campus. “[D.E.C.L.A.R.E. Day] was just to rethink the whole social order of things and out of that came what you’re still living under,” explains Bounds.[26] Kisner-Woodward Hall soon opened as the first co-educational dormitory and academic reform swept through the college. When Mary Frances Watson, the Dean of Women at Dickinson College, spoke to first-year women and their parents during the 1969 orientation program, her speech notes read: “DC is not the conservative little college in Penna. that will ‘take care of my daughter, see that she’s in at 10, never tastes a drink, etc.”[27] The Dickinson of Bounds’ freshman year was gone. The Baby Boomers ensured that even the conservative Dickinson could not go unaffected by the national shift towards generational empowerment.

Ultimately, the anti-war movement at Dickinson followed a similar trajectory as other campus reform efforts. Popular opposition to the Vietnam War moved liberal politics out of the domain of the fringe and into mainstream campus discourse. Inspired by this same generational empowerment to challenge authority, the larger student body soon embraced criticism of the war. By 1970, Bounds remembers that “the majority… were fed up and joined the march.”[28] As a member of ROTC, Durden was as far away from the fringe as you could get. Yet even he recalls “internally questioning, ‘What is this all about?’ This is a war that didn’t seem to be making sense.”[29] These doubts were compounded by a fear of the draft: “More and more people our age were getting shot,” remembers Bounds, “that really came to the forefront of our minds when the lottery system was introduced.”[30] As fear of the draft increased as the war in Vietnam expanded to Laos and Cambodia, opposition to the war grew stronger among all social groups. No longer a subculture of the school, the anti-war movement in 1969 and 1970 was poised to act on this new spirit of youth liberation.

Due to the mainstream nature of the movement, anti-war protest at Dickinson was far removed from the violent scenes described by Brands at other universities. By 1968, Dickinson was merely catching up to the true pioneers in campus culture. “We weren’t the Berkeley types,” stresses Poole, labeling the protest culture at Dickinson “middle class hippie-ism.”[31] For all their successes in pushing forward co-ed dorms, protest culture at Dickinson was nothing like the radicalism of SDS. Citing his Quaker background, Bounds notes that he “never had any stomach for [violence].”[32] The relatively restrained disposition of even Bounds’ liberal subculture highlights the campus’s prevailing moderate nature. At Dickinson’s largest anti-war protest, more than a thousand marched through Carlisle to the War College in May 1970 in reaction to the shootings at Kent State and the invasion of Cambodia.[33] “I remember saying that in a lot of these protest marches, it was really, that was the social way to connect with women back then,” remembers Guido, who chose to march separately from the crowd to demonstrate his serious dedication to the cause.[34] Bounds admits that while he and his fringe took the cause quite seriously, the protests were hardly a gloomy affair.[35] During the strike in the days leading to the march, students voted against shutting the school down and ensured that all students who wished to go to classes could be able to do so. “We were a very polite group of radicals,” jokes Poole, “We wanted our voices heard, but we didn’t want to disrupt anybody else’s life.”[36] After the march on the War College, the anti-war movement gradually faded away as the activist spirit died down over summer vacation.

Bounds’ account of student protest culture at Dickinson offers an interesting counter-narrative to Brands’ tale of radical activism. While Brands relates campus protest to nationalist leftist politics, Bounds’ memories seem to connect the anti-war movement more closely with campus reform protests for coed dorms or a relaxed academic hierarchy. Among Dickinson’s largely moderate student body, opposition to the Vietnam War was inextricable from a larger movement of generational empowerment. Despite its ideological distance from the radical left, Bounds looks back on his student activist days as a formative experience: “Those four or five years were unlike anything since,” Bounds remembers fondly, “It was a great time.”[37]