History 211, “US Constitutional History,” with Professor Matthew Pinsker, meets at Dickinson College during fall semester 2022 on Tuesdays and Thursdays at 1030am.  Course texts include Gordon Wood, Power and Liberty (2021),  Eric Foner, Second Founding (2019), various essays from John Garraty’s collection, Quarrels That Have Shaped the Constitution (1987), and numerous articles by noted scholars.  Students will also navigate dynamic web resources created by the House Divided Project at Dickinson College.  Students in the course will build their own website exhibit on a landmark Supreme Court case.

Banner image from Howard Chandler Christy’s oil painting,“Signing of the Constitution,” (1940), which hangs in the US Capitol.  John Dickinson is featured by the window on the right side, his head set off against the green curtain.  But note that even though Dickinson was a signer of the Constitution, he was not actually present on September 17, 1787. Here is a key to the 40 figures depicted in the painting.

Prof. Pinsker with his constitutional umbrella and penumbra of rights 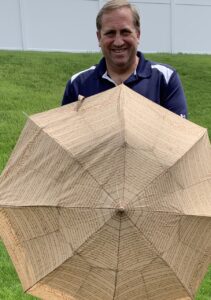