↓
Home Menu ↓
Skip to primary content
Skip to secondary content
Home→Blog→Rosenberg→A Warning from the Past: The Rosenberg Case

On June 19th 1953, Julius Rosenberg and Ethel Greenglass Rosenberg became the only American citizens to be executed under the Espionage Act. In a case fraught with government conspiracies, the Rosenberg case stimulated nationwide controversy, some of which still exists today.

In her documentary, Heir to an Execution, Ivy Meeropol, the granddaughter of the notorious Rosenbergs, attempts to shed some light on the plight of her grandparents.

As she struggles to understand the decisions of her grandparents, Ivy embarks on a heart wrenching journey through both sides of her family, the Greeng

lasses and the Rosenbergs, who later changed their name to Roberts as a result of the case. What she discovers is troubling; though Julius was proven to have traded secrets to the Soviet Union during World War II, there is little evidence that he gave them the secrets of the nuclear bomb. Worse yet, Ethel Rosenberg was executed alongside her husband despite the fact that she was only minimally involved in the espionage.

David Greenglass, the only real villain in Meeropol’s story, was responsible for the unjust death of his sister, Ethel. Pressured to testify against his sister and brother-in-law, Greenglass betrayed Ethel and condemned her to death. He originally stated that he had given information to Julius on a New York street corner, but at the behest of the prosecution, he altered his account. His new, embellished version stated that he had given Julius secret information in their apartment, incriminating Ethel as the typist for her husband. Greenglass later admitted to falsifying his testimony and explained that it was actually his own wife who had typed the secret documents. To save his wife from prosecution, Greenglass proved himself the “willing cooperator of the government’s machinations” and watched as his sister was wrongfully executed (quote from Michael Meeropol, Heir to an Execution). 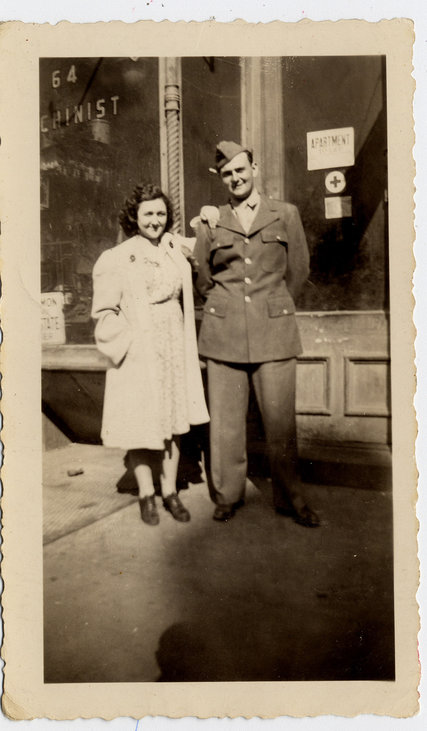 (Ethel and her brother, David)

In post-World War II America, Communism played a polarizing role in society. Some, like the Rosenbergs and their accomplice, Morton Sobell, were drawn to the Popular Front after witnessing the crippling poverty and racism that continuously affected the United States. Others, like Senator Joseph McCarthy, saw Communism as a plague that needed to be eradicated in order for righteous democracy to survive. Ethel and, to a lesser extent, Julius were caught in this anti-Communist fervor and paid the ultimate price for their political beliefs. In the Rosenberg case, the American government acted out of fear and allowed political hatred to supersede justice.

Nearly sixty five years later, it is fairly clear that the government did “everything you’d expect a democracy not to engage in” by allowing Ethel Rosenberg to be executed (quote from Miriam Moskowitz, Heir to an Execution). After the public release of the Venona cables in 1995, it became obvious that Ethel was indicted with Julius only so that the government could use her life as leverage against Julius, forcing him to give up names of fellow traitors. Both Ethel and Julius, however, remained loyal to their cause, refusing to betray their comrades or each other. By refusing to testify against her husband, Ethel made the painful decision to abandon her sons, Michael and Robert, and die alongside her husband.

The Red Scare and the injustices of the 1950s may seem detached from modern American politics, but it has never been more relevant. As the Rosenbergs lived under the persecution of McCarthyism, we now live under the constant threat of the Patriot Act. Buzz words like “Communism” have been replaced by newer, scarier terms like “terrorism” and “Islamic-fundamentalism”. But the general idea is still the same; as long as the people are given something to fear, they will turn a blind eye at the injustices committed by their government for the sake of national security.

In fact, our situation can be considered more perilous than that of the 1950s. Our president can (and probably does) use executive authority to kill whoever he deems to be a threat to national security without a trial. We, as Americans, must demand more from our government. We must expect a greater amount of transparency from our government and take a warning from the past so that justice for all citizens can be ensured.

It is with this mentality that people such as Julian Assange need to be praised, not condemned as a “high-tech terrorist”. By exposing documents about American operations in Iraq, Afghanistan, and Guantanamo Bay, Assange gave Americans access to the information they have a right to know. Similarly, Edward Snowden should not be considered a traitor because he was able to display exactly how much the government does without our knowledge. Snowden has forced the question – exactly how much government secrecy and mass surveillance is necessary to protect national security?

With the militarization of police forces and the installment of innumerable public surveillance systems across the country, it seems like American civil liberties are lessening every day. Julius and Ethel Rosenberg suffered greatly from the political climate of 1950s America, as did their children and relatives. Now that we are dealing with problems similar to those of the 1950s, our nation stands on the brink of letting history repeat itself. We cannot allow public fear, whether of Communism or terrorism, to supersede justice once more.