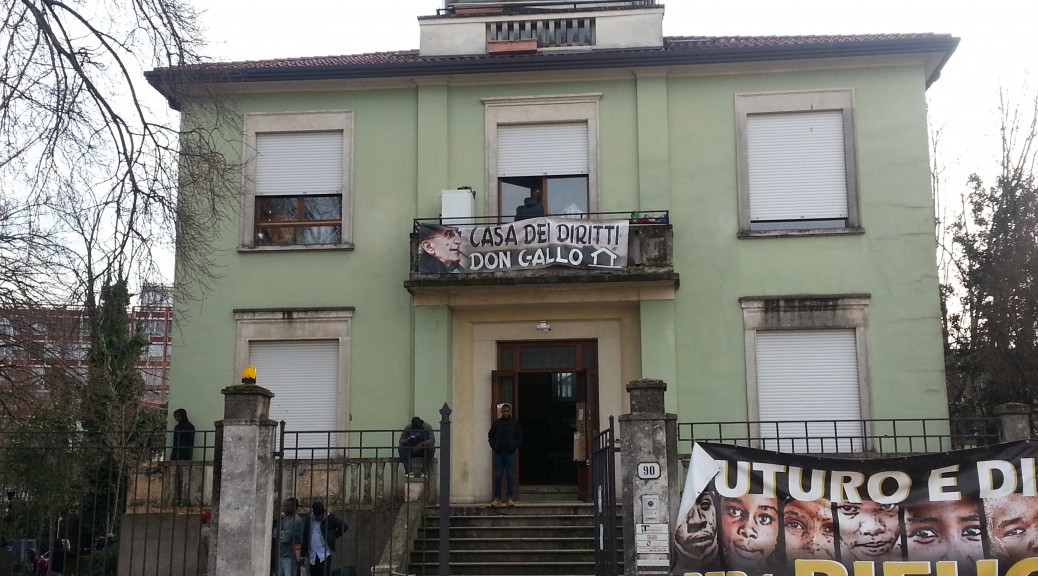 Eight years. In that time a newborn child can grow enough to speak, to articulate arguments, to read, to tie a pair of shoes, to become an acknowledged member of a community. In eight years a student can timidly begin their freshman year of high school and confidently graduate from a university- ready to enter the job market as a competent adult.

In eight years Samuel has lived in Italy, he has held one job. He has never owned a home; he has not seen his family. Samuel is an immigrant to Italy, and for him eight years has meant a perpetual limbo, a never- ending cycle of uncertainty and insecurity. Samuel currently lives at Casa Don Gallo, a previously abandoned building that has become home to many African immigrants living in Padova. Men from Sub- Sahara, West, and Northern Africa, with support from Razzismo Stop have transformed this once empty building into a communal living space- and a support system- as they search for their places in Italian society. The search for stability takes on many forms- job security, housing, documentation, etc- and for the men living at Casa Don Gallo none of it is promised.

Many of the men began their journeys in Sub- Saharan African such as Ghana, Nigeria, and Gambia, and traveled to Northern Africa- some to escape ward, some to search for economic prosperity. This journey can take weeks, even months, and we heard stories of men who had traveled between half a year and a year just to move north across the Sahara. A number of the men we had the opportunity to speak to had the end goal of working in Libya, previously an economic step- up from many Sub- Saharan African nations. Many of them found decent, steady work in Libya as mechanics, construction workers, and English teachers in the early to mid- 2000s. However, once war broke out in Libya and the Gadaffi regime fell, they had to flee along with the Libyans.

The journey from Tripoli, Libya to Lampedusa, Italy- although a relatively geographically short distance of under 300 kilometers, is one of the most straining aspects of this migration path. In a boat from anywhere between two days and two weeks, people immigrating are placed in sub-standard boats with untrained navigators for captains, surrounded by sometimes hundreds of other people all looking for refuge or simply a better life. After landing along the shores of Lampedusa, they were identified and given health asssessments at the initial reception centers and then dispersed throughout Italy. This is how many of the men at Casa Don Gallo came to live in Padova. While there are roughly 60 to 80 men living at Casa Don Gallo, none of the tenants know the exact number of other men living in this home without running water or electricity, as migrant influxes vary since people are always coming and going depending on relocation, work, or documentation.

Our group received a glimpse into this community through the hospitality of Debrey, a man from Ghana whom we interviewed the evening prior. Debrey’s journey took him from Ghana, to Burkina Faso, to Niger, to Libya, and finally to Italy. As an English teacher, his initial intent for migrating was to teach in Libya- and he did so, living in Benghazi from 2006 until 2011 when he fled the outbreak of war. Pushed farther away from his home in Ghana, he took a small boat across those 300 kilometers from Libya to Italy, a process he described as “selling yourself to death.” In his ship alone, twenty-eight people died while on board.

After the initial stages at the reception center, Debrey was released onto mainland Italy with no contacts, no job opportunities, and no housing. Even the agencies he was directed to contact were of little use. He attributed these difficulties not only to his status as an immigrant, but because he is a black immigrant. The struggles he faced with bureaucracy were heightened because of the color of his skin, and in a society where his skin makes his presence hyper- visible he found himself with less agency than ever. The strength of Casa Don Gallo is the community of support that has developed: While Debrey has so little influence over his situation in Italy, Casa Don Gallo provides a space of opportunity within- where, unlike in much of Italian society, the skills, potential, and humanity of each individual is recognized while they await the outcomes of their search for residency status and documents.

For all immigrants, the image of documents is riddled with hope, fear, and often desperation. Most of the men live at Don Gallo while they wait to hear back on their application status- if they will be accepted as valid candidates who can remain in Italy or within the rest of the Schengen region. While this process takes a minimum of 2 months, it’s not uncommon that this lasts years. Until they have official papers it is difficult to find work; yet, confirmation is not a guarantee that they will find work and move out of Don Gallo. So many of the men- like Samuel- remain in a state of ambiguity where they wait for Italian men and women- like themselves- decide their fate.

And yet, despite these dire circumstances, a diverse and supportive community has emerged. Within Casa Don Gallo there are internal groups of people from specific countries that allow for people to converse in familiar languages, reminiscent of their home, and creating some sense of belonging within a society that has pushed these people to the margins. Within Don Gallo, systems have emerged that make this home a beneficial community. The bicycle system that the residents have designed is an example of that. Although unable to find work in Padova, a mechanic living at Don Gallo is able to continue his trade by fixing up broken and discarded bicycles. From that point, the men living there are able to use the bicycles to move around Padova. This small- scale communal structure not only forms bonds between those living at Don Gallo but also creates a collective mentality of communal uplift, where everyone contributes to the strengthen of each other. It is not uncommon to hear the word “brother” in reference to another community member, as their individual struggles forge communal empathy and brotherhood in the face of adversity, discrimination, and sometimes a seemingly impossible situation.