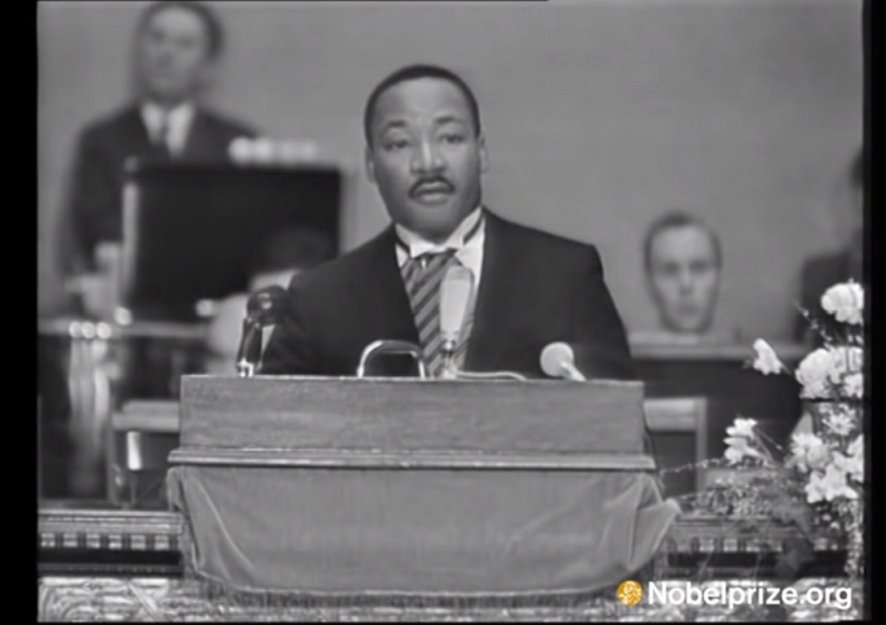 Dr. Martin Luther King, Jr delivered his Nobel Peace Prize acceptance speech at the University of Oslo on December 10th, 1964. In his speech, King talks about racial injustice and how he has lived through some terrible times, and although not resolved, Americans are making strides towards racial equality and are playing the role of a “relatively small part of a world development.” He agrees with Swedish sociologist Gunnar Myrdal as they both envision positivity and equality emerging in America in the long run because of “belief in the ideals of democracy and fair play,” as Myrdal stated (Gunnar Myrdal and Black-white Relations). King claims that one American success and sign of forwarding progress is how the nation voted to elect Lyndon B. Johnson as president instead of Barry Goldwater, who opposed the Civil Rights movement and would have obstructed African American liberalism if elected. King goes on to cover some other areas in this speech, but his powerful words and examples provided about race really do show signs of progress that he and so many other African Americans were able to help America achieve. The image of Eisenhower and the work of Albert Brewer are contributions to what King is referring to. He emphasizes that when Americans break social boundaries and lead by example, the rest of the world sees and knows what is going on whether they choose to follow in US’s footsteps or not.

“Sooner or later all the people of the world will have to discover a way to live together in peace, and thereby transform this pending cosmic elegy into a creative psalm of brotherhood. If this is to be achieved, man must evolve for all human conflict a method which rejects revenge, aggression and retaliation. The foundation of such a method is love.