This image, taken in 1958 in the White House, represents a powerful and groundbreaking moment for African Americans and their civil rights. The photograph features President Dwight D. Eisenhower; Lester Granger, executive secretary of the National Urban League; Dr. Martin Luther King, President of the Southern Leadership Conference; Asa Philip Randolph, vice president of the AFL-CIO; Roy Williams, executive secretary of the NAACP; Attorney General William P Rogers; E. Frederick Morrow, Administrative officer of the White House; and lastly Rocco Siciliano, assistant to the president. President Eisenhower is discussing the important issues of school integration, and other social and economic issues African Americans are dealing with in the 1950s. Obviously, at this time, African Americans are dealing with segregation in the forms of endemic unemployment, disenfranchisement, red-lining, housing, schooling, and anything else imaginable. Only so much is can be shown from a photograph, but the looks on everyone’s face prove that Eisenhower has met at some common ground with Martin Luther King, Jr. and the other African American men present. The meeting and conversation captured in this picture is not something you would see in other countries and governments in the year 1958, showing how the US is more advanced and progressive in terms of civil equality than other nations at this time. 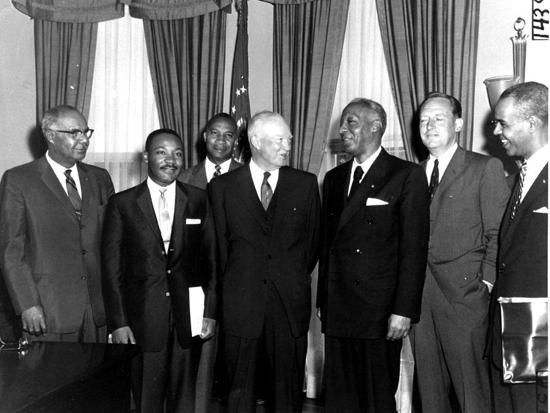