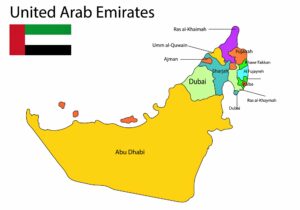 Above this text is a map of the United Arab Emirates. The United Arab Emirates or the “UAE” is located in the Middle East and shares borders with Oman and Saudi Arabia. The system of government in The UAE is a federal presidential elective constitutional monarchy. This is made of seven monarchies — Abu Dhabi, Ajman, Dubai, Fujairah, Was al-Khaimah, Sharjah, and Umm al-Quwain. In terms of leadership, there is a President of the UAE or the Prime Minister of the UAE, although these titles can be misleading because the UAE is an Authoritarian state which does not have democratically elected members or institutions. The majority of their politics have been funded through the vast findings of oil which have fueled politics and the economy for decades.

Arabic is the official, as well as national language of the UAE. English is also widely used though. The religion splits represented in the UAE are 76% Islam, 9% christian, and 15% being a mix of Hindu and Buddhist. There are around 9.9 million people living in the UAE with it seeing a major spike in the past decade due to the economic growth of the country. An interesting fact about the UAE shows that the UAE’s oil and natural gas reserves are the world’s sixth and seventh largest. This is a large reason why the government and economy has done so incredibly well in the past and recently. On top of this the UAE invests revenues directly into education, healthcare, architecture, foundational work including infrastructure which is unique considering they are an authoritarian state. Tourism is a major part of their uprising and economic success as well. Because of its distinctive economic and political decisions, I see the UAE as a very interesting country to study and take a deep dive into their media decisions and history (especially with free speech still not really allowed).

One response to “Introduction to the United Arab Emirates – Julian Schlesinger”