For this weeks blog post I would like to discuss a news article about a new agreement occurring among India, Israel, the UAE, and the US. I2U2 is said to improve efforts to contain China’s influence in Asia and the Middle East – an effort made by the US especially to establish ties between allies in different parts of the world.

China’s influence has been ever growing and I2U2 was founded in response to the Chinese influence in the pacific. The partnership for India allows economic growth. It bolsters trade ties with the UAE after major economic agreements occurred earlier in March. 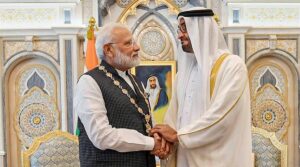 UAE also sees this as an opportunity to continue to expand their economic capabilities. With new treaties comes new partnerships that allow for vast opportunity to bolster economies on all sides. With the oncoming threat of Russia as well as China, it is important – especially for the UAE – to choose allies and develop their international partnerships more. India is an extremely important source of labor for the UAE as there are around 3.5 million Indians living in the UAE. On top of economic growth, it is said that treaty participants would like to work on food security as well as oil deals. With Russia and Ukraines war, there is a gap in food sources as Ukraine was essential for that.

The UAE will be investing around 2 billion USD to develop food parks across India. Sustainability is a large selling  point for this treaty and therefor it is essential to the treaty that it is included. The US is contributing 330 million to this project as well and India is trying to achieve their goal of having non-fossil fuel capabilities by 2030.

Overall it is said that the economic opportunities are welcomed by all and that economic developments will flow from these historic developments. The promotion of sustainable invest is an extremely promising advancement.