The City by the Bay is an obvious candidate for inclusion in any discussion of urban urbanature and perhaps even natural urbanature. San Francisco was located where it is precisely because of the location of the San Francisco Bay, not unlike Baltimore, New Orleans, New York, and numerous urban locations that find themselves near water, surrounded by water, or in some proximity to oceanic, riverine, or otherwise aqueous locations that had a direct impact on the growth of the city, the fame of the city, or some other aspect of its development and history. 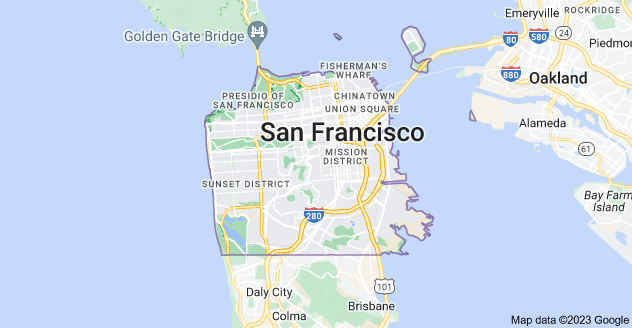 Even a map as simple as the one above–of downtown San Fran–reveals the extent to which the city’s location on a peninsula that juts out from Tacoma to the south toward Marin County to the north makes it almost an urban island.
A somewhat more subjective take on Frisco–Sasha Trubetskoy’s “profane, and judgmental ‘Urban Dictionary’ map of the city (below)–shows how the natural combination of the Bay and the Pacific Ocean created the perfect nonhuman framework for one of the greatest cities on North America’s West Coast. Sasha, a student from the University of Chicago, had no problem offending or praising many of the residents of the Bay area with her inventive location descriptions, and, if you look at the parts of her map that are shaded in green, you will get a clear sense of the way the link between urban and natural is almost the defining characteristic of this great area of Northern California: as urban as it is natural, as natural as it is urban. Study the location names and descriptions below carefully:

San Francisco was founded in the relative twinkling of an eye because of the discovery of that precious metal–gold–and the subsequent California Gold Rush of 1849. Commerce, then finance in the wider sense, and then the American navy all contributed to the rapid growth of our West Coasts most important city in the second half of the 19th century. Then, in 1906, an earthquake and subsequent fire (urbanature anyone?), the likes of which the emerging United States had never seen, devastated the city but also allowed for its rebuilding as a 20th century urban center, the envy of virtually every city west of the Mississippi River (by that time quite a large number of cities). After the 1904 earthquake revealed the extent to which any 20th-century city was still at the mercy of the forces of nature, this peninsula and its surrounding towns grew by adopting ever more modern building techniques, all designed to strengthen structures and make it possible for some buildings to literally rock-and-roll with a moving groundscape. Of course, any state sliced through by as many geologic faults as California is–the most famous of which is surely the San Andreas–is eventually going to produce jolts and tremors the likes of which are probably going to threaten even the most earthquake proof of buildings.