Deforestation though necessary for industrialization, has a long-standing history of being severely detrimental to the environment. Deforestation, especially to that of tropical rainforest, plays a huge part in habitat loss, loss of biodiversity, and is a lead factor in global climate change. Sadly, rainforests in Wilberforce Island in Bayelsa State, Nigeria are no different.

The department of Geography and Environmental Management at the Niger Delta University located in Wilberforce island, conducted a survey around the reasoning behind the deforestation of the local area tropical rainforest. Using 125 questionnaires given out to the local inhabitants and satellite photos taken in 2002 and 2015 respectively, they came to several conclusions. They found that, through their questionnaire, that most of the destruction of the forest came in part to logging followed closely behind by farming. This was then backed up by the satellite images that revealed an increase of land usage due to agriculture from 10.71% in 2002 to 30.57% in 2015. Within just 13 years, land use from farming increased by 185.35%, mainly impart to the population growth that came from the construction of the Niger Delta University in 2000. Furthermore, this new designated farm land had to come from somewhere, and you probably guessed it by now, it came from land previously held by the rainforest.

No other research has been done into the deforestation of the forests on Wilberforce Island, and so it’s good that this study shed some light on what’s happening. Between 2002 and 2015 forest cover dropped by 30.02%, destroying millions of species habitats along with it. That rate is unheard of and much more outside of this study needs to be done to stop it.

My final personal note is I find it quite ironic and irritating that this survey was conducted by the Niger Delta University, the same establishment that was the underlying factor for the increased deforestation rates of the island in the first place. I hope they take their study to the next step and work to prevent the further logging and destruction of the forests.

For more information on the study see the full text at www.ajol.info or www.bioline.rg.br/ja.

Think back to your first kiss, your soccer championship game, or hearing about the death of a loved one. Do you remember what you were wearing? Do you remember who was there with you and specifically where you were? You might even remember the exact words from what people said around you. These crystal-clear memories are called flashbulb memories, and are processed by the amygdala, a region of the brain associated with regulating emotions and emotional memory.

A new study now reveals that directly stimulating the amygdala can result in improved memory without a combined emotional experience. Participants in a study at Emory University Hospital received brief, low-amplitude electrical stimulation to the amygdala and demonstrated improved declarative memory the next day without any subjective emotional feelings or involuntary emotional responses, such as increased heart rate or faster breathing.

The study, published online in December 2017 in the journal PNAS, took place in conjunction with the Emory University School of Medicine. Epilepsy patients with electrodes already implanted in their brains were recruited to participate, and fourteen individuals took part in the study. Participants were shown numerous neutral images (i.e. a picture of a basketball or a key), and then either given a short stimulation of the amygdala or no stimulation. Immediately afterwards and again the following day, participants were shown more neutral images in a recognition-memory test. The patients who received the stimulation exhibited greater memory retention of images after one day, compared to the control group.

While the participants in the study were simultaneously receiving treatment for epilepsy, they showed substantial memory enhancement due to the amygdala stimulation. One patient, who suffered from brain damage and memory impairment and rarely recognized researchers and physicians, displayed the most memory improvement. Other patients who experienced seizures in between the initial stimulation and the test the following day showed improved memory, presenting evidence that the amygdala stores memories in spite of other neurologically debilitating disorders. None of the patients reported being able to feel the stimulation.

Researchers speculate that the amygdala plays a role in delegating non-emotional declarative memory to other structures, namely the hippocampus and the perirhinal cortex. Specific stimulation to the hippocampus and perirhinal cortex to improve memory has been erratic in prior studies, and the amygdala might be the missing link. According to co-author Joseph Manns, “the long-term goal of this research program is to understand how modulation of the hippocampus by the amygdala can at times lead to memory enhancement and at times lead to memory dysfunction, such as that observed in post-traumatic stress disorder (PTSD).”

Regarding the targeted amygdala stimulation, co-author Cory Inman explained, “One day, this could be incorporated into a device aimed at helping patients with severe memory impairments, like those with traumatic brain injuries or mild cognitive impairment associated with various neurodegenerative diseases.” Small deep-brain stimulation implants are already being used to treat Parkinson’s disease. This study may be utilized in future research to develop similar clinical treatments for patients with memory disorders, so that their non-emotional memories like what they ate for last night’s dinner or what they read in a good book, can be remembered the next day.

On October 25th, 2017 (published by NASA in 2018), researchers at NASA’s Ames Research Center in Mountain View California explored the differences in pre and post vascular pressure in International Space Station Crew members and Head Down Tilted (HDT) Bed Rest patients. This study found that venous responses to these long-duration phenomena were marked by a decrease in vascular densities in the retinas of crew members and an increase in subjects after HDT. It is well known that long term space travelers experience “Space” headaches due to cephalad fluid shifts increasing fluid pressure in the upper body. Cephalad fluid shifts occur when an astronaut experiences more fluid then normal in their upper body due to the lack of gravity forcing the fluid down. This effect is easily seen in the puffy faces of astronauts in space.

The researchers used a 30 infrared (IR) Heidelberg Spectralis® machine (a more advanced version of that fun puff test you get at the doctors) to determine that the vascular part of the retina in the eyes decreased in crew members after space flight yet increased in subjects after HDTBR. Pictures from Spectralis were looked at by VESGEN, a new automated software developed to discover vascular diseases in the retina and other tissue. The pictures created a map of blood vessel diameters and densities utilizing a new measure of vascular space-filling capacity called . The experiment used four people who experienced HDT and eight ISS crewmembers for the project. The VESGEN program performed two distinct tests on these individuals. Test one did not disclose if the left and right retinas were from the ISS travelers or HDT patients, while test two matched the pairs for each subject to display the effects of either HDT or space flight.

The researchers were surprised to see that 11 out of 16 retinas of the crew members’ space-filling capacity of their retinal vessels decreased and that 6 out of 10 retinas of the HDT patients vascular densities increased. The researchers believe that this difference mostly comes from lack of imaging that can capture smaller vessels rather than from vessel growth or decay. They also said that six months on the ISS compared to seventy days on HDT and the presence of microgravity and gravity may also have a large effect. However, there is still room to improve! The biostatistical and medical analyses of the images will have the final say on whether the VESGEN findings were correct or not.

OPINION: Who knew that main reason astronauts have space headaches was because of excess fluid on on their optic nerves! I think it’s very possible that VESGEN outcomes are true. As an aspiring optometrist myself, I found these results to be pretty cool. I’ve never really heard about the effects of almost no gravity on vision, but it makes sense right? Vision has to be compromised somehow with all of that extra fluid in the upper body. However it was a very small sample size so the VESGEN outcomes might be wrong, but then again its expensive to send people to space and hard to get people to do HDT for seventy days. 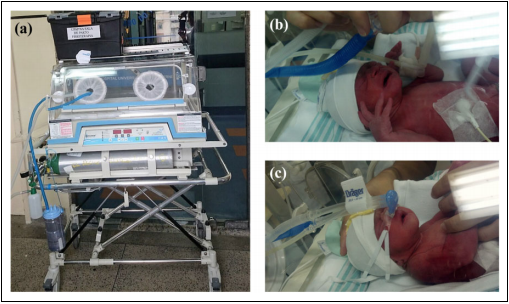 A new method of Continuous Positive Airway Pressure may be less invasive, more effective, and a far lower cost than traditional methods. A CPAP ventilator system is essential for ensuring the normal breathing of newborn, particularly pre-term infants. CPAP has been shown to increase the survival rates of infants and the Underwater Bubble technique would allow it to be used with fewer limitations.

The underwater bubble technique is named such because as air is pumped into the infants lungs, it exhales into a tube the end of which is submerged in a container of water, regulating the pressure of the entire system. Pressure can be adjusted simply by raising or lowering the depth of the tube.

This study did not conduct trials and experiments but rather evaluated the techniques and their effectiveness in a newborn intensive care unit at a Brazilian university hospital.

The underwater bubble method does not require the insertion of a breathing apparatus making it minimally invasive, and is much lower cost than present alternatives, making the technique more readily available to the developing world.

Really the goal of CPAP is to ensure that newborns are able to breathe without the need for mechanical ventilation or intubation, two invasive and high risk techniques that are fortunately becoming less needed as CPAP progresses.

Another study (Dunn 2011) found that CPAP allowed 48% and 54% of newborns to be managed without mechanical respiration or lung inflating fluid.