For the United States, the first amendment’ freedom of religion and the separation of church and state are two of its many fundamental beliefs and values. The MENA region however, has the highest percentage of nations with an official religion, most Islam, and is known for its strict regulation and censorship of religious expression. In these countries with an official religion, governance and Islam are combined: citizens are required to be Muslim, public worship by religions other than Islam is forbidden, and the distribution of non-Muslim materials such as the Bible or the Torah are illegal.

While doing my research, I was especially interested in how high or low levels of the population following the official religion affected the validity and reasonableness of the country’s level of regulating religious expression.

Let’s look at Algeria for an example. Algeria’s official religion is Islam, and the country is dominated by Muslims. In a country where 99% of its population is Muslim, I personally find it logical for the country to have high religious regulation in regard to preserving and following Islamic law. Naturally people wonder about the 1% of religious minorities? Is it fair for them that the country heavily censors religious expression? 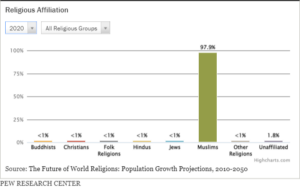 Maybe the reason the country has such a high percentage of Muslim population, is because the high religious censorship has pushed other minorities out. Why live in a country where the entire state is based on a completely different religion than your own?

Anthony Borden’s ‘Journalism in Conflict: Reporting from Ukraine and Beyond’

The Role and Significance of Mass Media