This past week, there have been numerous incidents of people breaking into banks and demanding the money in their bank accounts. Since Lebanon’s economy crashed in 2019, banks regularly and are currently undergoing a period of freezing their assets and locking depositors out of their accounts. Not only are citizens unable to withdraw money from their accounts, but the economic situation continues to regress; the Lebanese pound continues to decrease and more than 80% of people now fall under the poverty line.

While there is an extensive list of contributors to the crisis, ranging from decades of war and a burdening public debt, the main reason the condition of the Lebanese economy continues to worsen is the greediness and inaction of the government. The Lebanese people have tried to get the government’s attention by years of peaceful and violent protests as well as politically by the use of the ballet box; each ending in failure and without support from the government.

Unfortunately, the reality is that the leaders of the Lebanese government are more focused on keeping their wealth and power, than creating an economic recovery plan. The political leaders are untouchable; they do not have a plan to help the people, nor will they allow others the power to do so.

With what feels like no other option, the Lebanese people have taken matters into their own hands. On the one hand, the people are providing their own self-help; they can no longer patiently wait for the government to help, but must go and reclaim their money themselves. On the other hand, people are now contributing to the crises by not only committing crimes, but are taking money from other people who wish to draw their funds as well.

After reading, I now have a better understanding of the existing political and economic conditions in Lebanon. Economically, the economy has been in decline for decades and will continue digressing unless the government actively tries to find solutions; this is very unlikely. Politically, numerous leaders sit at the top of the political order, freely committing injustices without punishment, ignoring the disastrous economy, and dismissing the cries for help from the common man.

With these understandings, one may wonder how the government will handle the media; specifically, the news coverage of the crisis, as well as the potential for the public using the media as a platform to share their grievances and further spread the ‘self-help’ initiative. In the next couple of days, we will see if the government will try to censor the media; both preventing reporting on their, rather embarrassing, economic situation and in regard to the people, whether the Lebanese government, threatened by the spreading public civil disobedience, will constrict the citizen’s ability to use the media.

Finally, I am left thinking about what the public will do if the robberies prove ineffective and fail? What will people turn to next; a coup, a wide spread movement of robberies, or just pure chaos? What else do the Lebanese people have to lose?

Ownership of Mass Media in Lebanon

In general, the Lebanese media is controlled by a handful of individuals either belonging to political parties or local dynasties. Compared to its neighbors, Lebanon technically has more media freedom; however, it has the highest rate of political affiliation, with most of the media outlets being state-owned or owned by current or former politicians. Specifically, elite families such as the Daher-Saad, Khayat and Murr families, own several of the most prominent media outlets like LBCI, Al Jadeed, and MTV. Owning these media outlets allows the families to directly control the news content as well as advance their own partisan message. Hezbollah also owns an extensive network of media outlets from Al-Manar TV to Al-Nour Radio; platforms where they typically spread disinformation targeting Lebanese and international audiences.

In regard to these organizations global reach and audiences, most are either focused on the larger Arab region or just Lebanon. For example, the LBCI, literally meaning Lebanese Broadcasting Corporation International, has launched international versions of its network targeting Lebanese citizens in diaspora countries. Other organizations such as Al Jadeed, have also launched in countries like the United States, Canada, South America, and Australia in order to reach Arabic speaking immigrants. Hezbollah and its television outlet Al-Manar, on the other hand, have been either banned by countries or are simply unavailable outside of Lebanon.

Lebanon’s current economic crisis which began in late 2019, has also led media organizations to increasingly fall prey to international and political influence. The few independent news outlets that still exist now commonly accept bribes from politicians in exchange for supporting and advocating for their partisan message, especially during electoral periods. In fact, foreign entities such as foreign embassies and companies often provide these smaller media outlets that are typically low on funds, financial assistance for editorial control and influence. With the current financial crisis, the Lebanese media realm is extremely vulnerable to increasing control by transnational capital.

To help imprint how politicized the Lebanese media is, below are some statistics of the current media system:

Print – 9 out of the 10 print outlets are directly politically affiliated.

Radio- 7 out of the 8 radio stations are directly politically affiliated.

In the 1960s and early 1970s, Lebanon was referred to as “the Riviera of the Middle East,” the prestigious tourist destination where people from all over came to sit and sunbathe on the beautiful coastline along the Mediterranean Sea. However, in 1975, Lebanon quickly switched from the place to be, to the place to avoid. With an already religiously diverse public, surge of Palestinian refugees, and the ending of the Cold War further dividing the public politically, a wave of multi-faceted armed conflicts arose between Lebanon’s Christian and rising Muslim population, which itself was divided between Shias and Sunnis.

Also fighting, in what is now known as the Lebanese Civil War from 1975 to 1990, were Lebanon’s neighbors Syria and Israel; first, entering the war in regard to protecting their own territory and later, using Lebanon as the “perfect playground” to settle the growing hostilities between the two. The 15-year civil war eventually ended in Syrian military occupation intended to assist the new government and with the formation of two major political parties: the March 14 Alliance, led by Maronite-dominated groups with an anti-Syrian stance, and the March 8 Alliance, led by the Shia-dominated terrorist organization Hezbollah with a pro-Syrian stance. The two alliances were dedicated and named after the Cedar Revolution in 2005, a series of peaceful demonstrations aiming to and successfully forcing the withdrawal of the Syrian military from Lebanon.

Today, Lebanon maintains a parliamentary republic where each high-ranking official must be a member of a specific religious group; for example, the President must be a Maronite Christian and the Prime minister a Sunni Muslim.  While the U.S. follows the idea of a separation of church and state to prevent religious conflicts, Lebanon, with its extremely diverse religious population, uses this system as a way to fairly represent the 18 religious groups in the government. 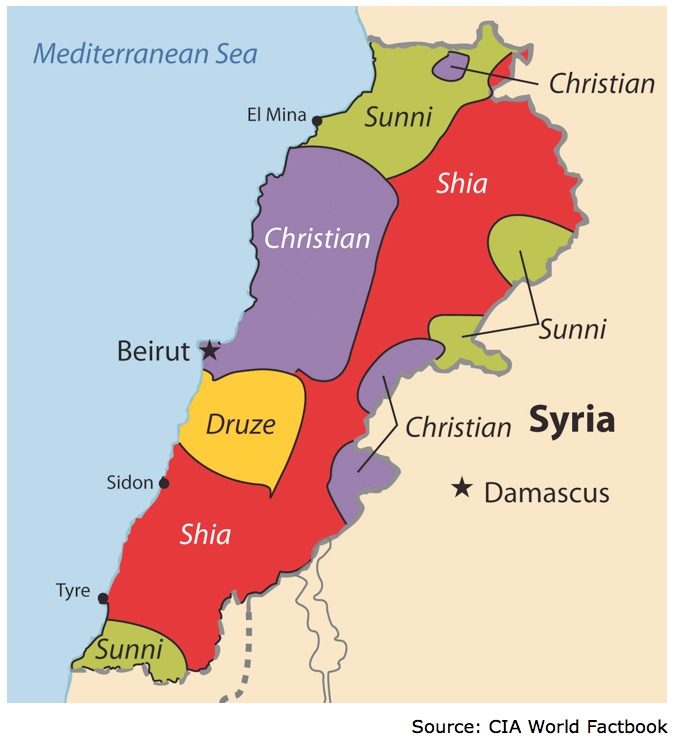 Religious Demographics of Lebanon in 2006

Although a national census has not been conducted since 1932 due to the sensitivity of demographics and diversity, 95% of the Lebanese population is either Muslim or Christian, divided among various sects and denominations. The two largest religious groups being the Maronite Christians, one of the two original founders of Lebanon, and Sunni Muslims. For ethnicity, Lebanon is mainly composed of Arabs and a small portion of Armenians; however, the Arabs themselves originate from many different Arab countries where today, a large majority of refugees are from Palestine and Syria. Arabic is the official language of Lebanon with Lebanese Arabic as its spoken dialect. In addition, due to Lebanon’s history as a mandated country under France, French as well as English are also taught in many Lebanese schools.

In regard to the Human Development Index, Lebanon is a developing country ranking 112nd out of the 191 countries worldwide. Due to an ongoing financial and economic crisis, it is estimated that 82% of the population lives in multidimensional poverty. Other factors include its unstable political system, high GDP ratio, unreliable internet services, and proximity to conflict-ridden Israel/Palestine and Syria. Despite its low ranking on a global scale, Lebanon ranks as one of the highest Arab states in the Middle East, not counting the oil-rich gulf countries.