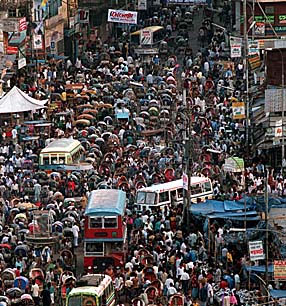 Last Thursday, a group of international researchers released a report that projects a global population increase from seven billion today to eleven billion by the end of the century.  This overturns a general agreement worldwide that population would only peak at about nine billion people in 2050, which was the assumption underlying a plethora of key scientific reports on malnutrition, HIV/AIDS, demographic composition of different countries, and, most interestingly for our purposes, all previous Intergovernmental Panel on Climate Change (IPCC) reports on the threats of climate change and global warming.

This burgeoning population could reach, as Simon Ross from the think tank Population Matters told the Guardian, “between 40-75% larger than today in the lifetime of many of today’s children and will still be growing.”  The implications of this on resource use and energy demand will be quite significant: more people will require more resources in order to survive, but the resources are in finite supply, so competition will increase, thus putting pressure on those at the margins who may be denied access.  With this grim prospect, we can expect to see more exaggerated poverty and strife worldwide, while aggregate resource use can be expected to increase.

This will pose a large roadblock for any future agreements to reduce greenhouse gas emissions because not only is the necessity for emissions reductions compounding over time, but so is the difficulty of achieving that aim (mainly due to the reasons I discussed above).  The momentum must be continued now and aggressive reductions  must be made now so that, moving forward, the work before us will be within our reach to achieve; if we wait any longer, that work will only get harder and harder, and further and further out of our ability to cope.

3 Replies to “The World May Not Be Flat, But It’s Sure Growing.”