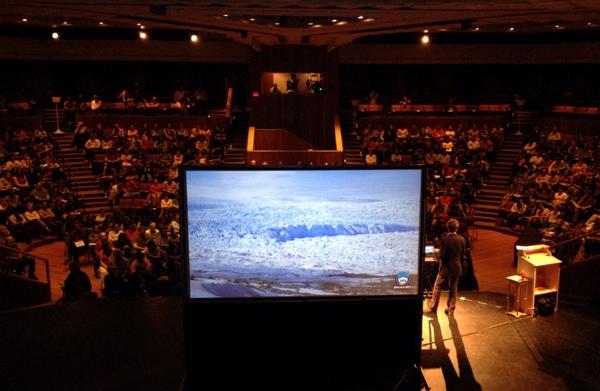 James Balog’s documentation of melting and changing ice due to climate change are breathtaking. Through his art, he is able to capture a phenomena that feels like it should take decades, to occur in as little as thirty seconds, but so what? The “what” is that besides making new observations evidencing Climate Change, Balog’s work becomes relevant to the “everyday” person, bringing the issue of climate change to the hearts of more than just concerned scientists, a few national governments, and environmental grassroots groups. Additionally, Balog’s Extreme Ice Project has become a tool for legislation as providing solid evidence of the climate changing rapid; these pictures prove that the climate is changing now. Balog’s Chasing Ice exemplifies a multi-sector approach, combining private art through photography, public concern, grassroots action, and influence on governmental legislation, into a big ball of momentum ready to act. Just looking at Dickinson, more than your average Environmental Studies and Science majors were encouraged to watch the film and attend his lecture/performance. Even my friend, an art history major, came to the lecture/performance for her contemporary art class.

More importantly, not only does Balog’s work reach everyone, it resonates with them. Talking about Balog’s work at dinner the night before the lecture, my friend began relaying facts to me from Chasing Ice about the urgency of global climate change. As an International Studies major focusing on sustainability, I thought I would’ve been the one telling her facts regarding Climate Change but Balog’s work makes the issue resonate with everyone, no matter one’s walk of life. Balog’s multi-disciplinary work has had great success in sparking more concern in the world’s citizens and reminds me of the growing call for a multi-level multi-sector approach to climate governance. The bottom line: if anything is to be done about climate change, everyone, no matter their interests, must be on board and Balog’s work brings us one step closer.