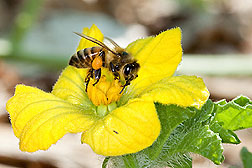 Honey bee populations have decreased from “5 million in the 1940s to only 2.5 million in 2014 in the United States” ( USDA) .  Human-induced CO2 emissions could have affected the honey bee populations. Honey bees are major pollinators for plants, hence they are vital for our agricultural system. An example of this dependence is Californian farmers bringing in colonies of bees to keep crops alive through pollination. Plants and bees have co-evolved together, so bees know when to pollinate flowering plants.  The major issue is that scientists do not know the environmental and genetic triggers that cue plant and pollinators to have synchronicity. Meaning temperatures have increased due to global warming, warmer temperatures have caused plants to flower earlier in the season than bees have been ready for.