Elizabeth Jane Weston (1582-1612; English, but active in Prague) was one of the most talented Latin poets of the early modern period. Much celebrated in her own time, she is rarely read today, though she has achieved some measure of gaming fame as a character in Assassins’ Creed. Donald Cheney and Brenda Hosington translated her collected works in a book published by Toronto University Press in 2000. A digitized transcription of her three-volume collection Parthenica (1606?) is available at the Neo-Latin site CAMENA, published by scholars at the University of Mannheim. This is how I first encountered her works. There are, as far as I know, no editions meant for students of Latin, with vocabulary glosses, notes, and so forth, with the exception of this interesting 2017 blog post, which discusses a poem by Weston addressed to Ovid in exile. As a small step in remedying this I asked the students in my recently concluded Ovid class at Dickinson to produce, as their final projects, individual editions of her fables, Quaedam Fabulae Aesopicae (Parthenica vol. 2) and here they are for your enjoyment. Each includes a Latin text, vocabulary list and notes, English translation, text and translation of kindred Aesopic material, a short discussion interpreting the fable (Weston gives no explicit morals), and suggests about how they might be relevant to the author’s circumstances. 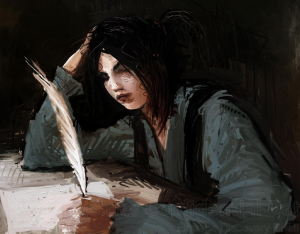 Leo et Rana (The Lion and the Frog), commented on by Jocelyn Wright

Cassita Sola (The Captured Lark), commented on by Lexi Chroscinski

Sus et Canis (The Sow and the Dog), commented on by Nick Morris

Anseres et Grues (The Geese and the Cranes), commented on by Jack Tigani

De Pulice et Milite (On the Flea and the Soldier), commented on by Carl Hamilton

Columba et Tabula Picta (The Pidgeon and the Painting), commented on by Katrina Falkner

Those looking for more detail on her interesting and difficult life are directed to the excellent introduction in the book of Cheney and Hosington, or to J.W. Binns, Intellectual Culture in Elizabethan and Jacobean England: The Latin Writings of the Age (Leeds: Francis Cairns, 1990), pp. 110-114. Binns’ book is now hard to find, so here is a bit of what he has to say (p. 110):

The writings of the Anglo-Latin poet best known on the continent in the early 17th century were never printed in England. Elizabeth Jane Weston is nowadays completely ignored by literary histories; but in her day, she was widely celebrated and earned for herself the sobriquet the ‘Maid of England’. A few details drawn from her own work and from later accounts may however be given. According to the traditional view she was born in England circa 1582 and left the country in her youth, along with her parents and brother, after her father, who fell into disgrace for political or religious reasons, had lost all his property. In 1597, when the Weston family was in Bohemia, Elizabeth’s father died, and the family seemed to have been saved from destitution by the unusual talents of Elizabeth Weston herself, who attracted the notice and patronage of various influential men, especially Georg Martin von Baldhoven, a Silesian nobleman with whom she corresponded. In April 1603 Elizabeth Weston married a jurist at the Imperial court, Johann Leon, and by him had four sons, whom she outlived, and three daughters. She herself died on 23 November 1612, and was buried in Prague in St. Thomas church. (p. 110)

After surveying the letters and verse she wrote to the Emperor Rudolph II and other possible or actual patrons, Binns continues (p. 113),

The verses which Elizabeth Weston wrote to such great men, known personally or by letter, are only part of her poetry. She can recount vividly incidents from her own life, such as the flooding in Prague and her recollections of the garden of Johann Barvitius. Some poems describe the effects upon her of poverty, and her emotional states: one deals movingly with her brother’s death, and in another she compares her own fate as an exile to that of Ovid. Some handle religious themes, for instance her verses on the life of Jesus. There are poems in which she gives moral advice, and epigrams on secular and sacred subjects, including love, friendship, greed, charity and the evils of riches. She writes occasional verses on St. Andrew’s day and on her own name day. In one poem she attacks the faithlessness and duplicity of the Jews. There are several verse paraphrases of some of Aesop’s fables, including these stories of the Lion and the Frog, the Eagle and the Tortoise, and the Sow and the Dog. Certain poems allude to her weaknesses as a writer of poetry. The accomplishment and sweetness of her verse was much praised … (p. 113).

My own personal favorites so far are her poems about printing, one an ingenious celebration of Gutenberg, the other an amusing account of her visit to the shop of some hard-working and hard-drinking printers. It reminded me of the final scene of the 2019 film adaptation of Little Women, in which Louisa May Alcott watches her books being produced in pride and amazement.

One thought on “The Fables of Elizabeth Jane Weston”