The Dickinson Workshops are mainly intended for teachers of Latin, to refresh the mind through study of an extended text, and to share experiences and ideas. Sometimes those who are not currently engaged in teaching have participated as well, including students, retirees, and those working towards teacher certification. 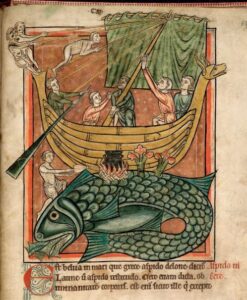 The text for 2023 is the legendary Christian tale of sea adventure, Navigatio Sancti Brendani Abbatis (“Voyage of St. Brendan the Abbot”). This Irish epic, a narrative masterpiece, was recorded in Latin prose sometime between the mid-8th and early 10th century. According to the Navigatio, Brendan makes an astonishing Atlantic journey with other monks to the “Promised Land of the Saints” (later identified possibly as the Canary Islands), which he reaches after a prolonged search. The Navigatio was enormously popular in the Middle Ages, surviving in about 125 manuscripts, and the story was retold in Anglo-Norman, Dutch, German, Venetian, Provençal, Catalan, Norse and English.

We will read the Latin text with the help of the new commentary and vocabulary by Prof. William Turpin (Swarthmore College), which is forthcoming in Dickinson College Commentaries.

The participation fee for each participant will $400. The fee covers lodging, breakfast, lunch and dinner in the Dickinson cafeteria, the facilities fee, which allows access to the gym, fitness center, and the library, as well as wireless and wired internet access while on campus. The fee does not cover the costs of books or travel, or of dinners, which are typically eaten in the various restaurants in Carlisle. Please keep in mind that the participation fee, once it has been received by the seminar’s organizers, is not refundable. This is an administrative necessity.

The first event will be an introductory dinner at 6:00 p.m., July 7. The final session ends at noon on July 12. Sessions will meet from 8:30 a.m. to noon each day, with the afternoons left free for preparation.