“Oh, we were just watching the frontier and reinforcing the 38th parallel. They were assaulting once in a while and we would have to shoot at them and go back into our foxholes. They gave us some trouble but not a lot. It was nasty how the weather was. God, it was cold and sometimes hot, just terrible. It got very boring, very boring but it was day after day.”[1] Retired United States Marine, 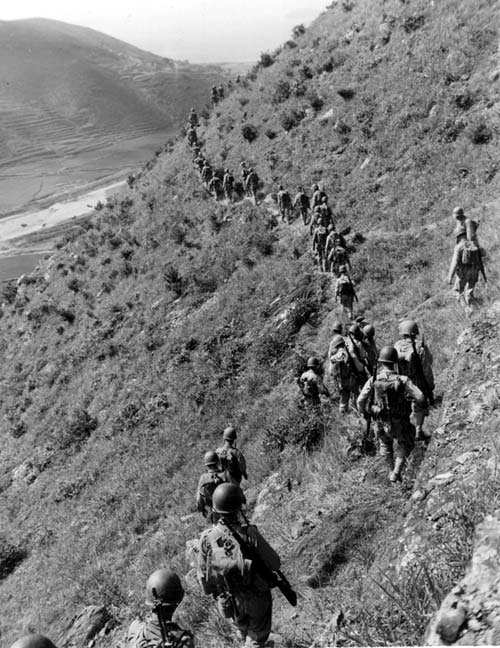 Joseph M. Micci Sr., remembers his daily activity of monitoring the 38th parallel from September 1954 to November 1955. At a time when the armistice had been signed for over a year and thousands of United States troops have been demobilized, many people believed that was the end of conflict and US involvement in Korea. However, it was just the start for Micci, who came to Korea as a replacement infantry man for the demobilized troops. During this period, keeping stability and peace within the region was an important task for reestablishing the two sides and trying to create unification. When remembering what stood out most to him during the war, he recollected, “Just the people were so poor.”[2] As Micci and his fellow marines drudged through the Korean terrain along the 38th parallel in an attempt to keep peace, when the time finally came for him to go back to the US he felt, “happy we were able to go home and not have a big, long war…in that respect I was happy, but down deep I sort of wanted to go on and finish the thing…I think that was a general consensus of many people.”[3]

The Korean War started with Kim Il-sung ordering the invasion of South Korea on Syngman Rhee’s troops. Within days, the North Koreans captured Seoul, the capital of South Korea. President Harry S. Truman viewed the attack as an attack on world order and free government, and wanted to stop the potential spread of communism. In a response to the attack, “Truman’s first step was to order American air and naval forces to the combat zone. These were followed by ground troops dispatched from Japan to South Korea.”[4] As the Soviets boycotted the Security Council, the council voted in favor of allowing member states to help protect South Korea. The war did not go as planned at the beginning. However, on September 15, 1950, the American commander, Douglas MacArthur came up with a brilliant, yet risky plan. The plan was “a daring operation planned and executed under extremely difficult conditions…the landing suddenly reversed the tide of the war, forcing the invading North Korean army to retreat in disorder up the Korean peninsula.”[5] Recalling how he

felt after the re-capturing of Seoul, Micci stated, “That was great oh my God. That was so great we were so happy. We thought the war was all over.”[6] As MacArthur’s plan boosted the morale of the United States troops, and certainly American citizen’s outlook on the war, he looked to ride the momentum for as long as he could. Despite orders from the UN to not invade the North Koreans because the US involvement was only meant to defend South Korea, MacArthur pushed on and up to the Yalu River. At this point, the Chinese government warned the US of being too close, a warning that was taken likely by the Americans. The US would pay the price in late November when the Chinese attacked American and South Korean troops. After suffering heavily casualties, the US involvement became questioned and the war grew unpopular in America.

After years of stalemate and a growing negative opinion on the war, Americans desperately needed someone who they could place their trust in. Luckily, they found their man in Dwight D. Eisenhower, who was a World War II hero. In his campaign promise, he promised to go to Korea in an effort to find a solution to the war. On November 29, 1952, “Making good on his most dramatic presidential campaign promise, newly elected Dwight D. Eisenhower goes to Korea to see whether he can find the key to ending the bitter and frustrating Korean War.”[7] Showing his seriousness and commitment over the conflict, Eisenhower helped to find a solution. “On July 27, 1953, the armistice agreement was finally concluded, providing for a cease-fire [and] a demilitarized zone 4,000 meters wide between the opposing forces.”[8]

The end of the war marked for the demobilization of thousands of troops because the fighting came to an end. However, in 1955, “there were 85,500 American soldiers in the country, against 325,000 in 1953.”[9] Although the number of troops stationed in South Korea after the armistice was smaller than two years earlier and these troops were not fighting, they were essential in keeping stability within the region. The Mutual Defense Treaty between the United States and the Republic of Korea, signed October 1st, 1953 and effective November 18th, 1954, called for the US to remain in South Korea around the 38th parallel and DMZ zone to keep watch and defend a potential attack from the North Koreans. In order to be prepared for such an attack, “the 1st Marine Division had conducted an active small-unit amphibious

Soldier standing at the 38th Parallel (Courtesy of Sidney Fox)

training program during its postwar Korea duty.”[10] This was a crucial time because as the US helped reconstruct South Korea politically, economically, and militarily, peace had to be kept and the troops had to be prepared to fight. As Micci and his fellow marines patrolled to keep peace, he recalled that they would help reestablish the people of South Korea. He stated, “Yeah we did a lot of work. We helped them with their homes especially. We had carpenters and plasters. A lot of [the homes] were blasted out a little bit and we tried to help with the reconstruction. Also, I was helping some of the children. Mainly guarding the frontier up there that was about it. Nothing was happening…. very rarely any action.”[11]

The descriptions from Mr. Micci shed light on an interesting period of time after the armistice, which is often glanced over in history, and hardly mentioned by Brands. The two years following the armistice were truly a stalemate and bluntly put by Micci as very boring. Despite the lack of action, the actual act of keeping peace and stability in the region was key, as South Korea suffered greatly during the war and was vulnerable to a North Korean attack at any minute. Although he was very young, Micci explained how he felt like he had an impact on the people of South Korea who he and his men helped. The tension filled and anxiety-ridden years immediately following the armistice are evident when Sheila Jager stated, “Although the killing had stopped, the war continued, solidifying cold war arrangements for the next fifty years.”[12]

One could appreciate the work done by the soldiers who are easily forgotten in the shadow that is the post-armistice era. Tedious days and nights patrolling not knowing if there would be an attack, rebuilding broken homes that were easier to repair than the broken hearts of the families they held, and traumatic experiences, such as planes diving down low in an attempt to scare as explained by Micci, all hold truth to Jager’s point that war continued.

[9] Gabriel Jonsson. “The Peace-keeping Role of the American troops in South Korea” http://www.diva-portal.org/smash/get/diva2:482372/FULLTEXT01.pdf

Q. How did you feel when war broke out?

A.We had just finished World War 2 a few years before and we thought we were going to have peace. People in the United States were relieved because the war was so long. We really didn’t like it at all. We were not prepared for another war at all and we just disbanded millions of people from the war. No one liked going to war again and they were just a little, dinky country and we had enormous power, even to this day. We were tired of war. World War 2 was so long and so many people died when I was just a kid so we didn’t want another war. It was just terrible!

Q. Did you enjoy any part of the war?

A. I was just a young kid. I wasn’t very political and didn’t know much and all I knew was bullets. They were shooting and I was a little bit scared. The main thing I was scared of was the planes. They would dive down over us. They weren’t shooting at us though. The “migs” would come in close and scare us. I think a lot of the people didn’t want another war. We weren’t afraid of them at all. In those days you know I was going with your grandmother and I was more interested in having fun with her. I loved all the swimming and canoeing…everything.

Q. Once Douglas MacArthur was fired, did you have any belief in Eisenhower?

A. He was sort of a weakling. He didn’t want to go into North Korea and he wanted peace. MacArthur wanted to continue the war because he said you’re always going to have war with these people, and he was right. When they were firing MacArthur we didn’t want that, he was a big hero in World War 2.

Q. Do you feel like your efforts were worth it with thousands of Americans dying and thousands more wounded only for the war to end in a treaty and not even finish the war?

A. I was sort of happy we were able to go home and not have a big, long war because we just lived through a big war with World War 2. In that respect I was happy, but down deep I sort of wanted to go on and finish the thing because I think I believed more in MacArthur than Eisenhower. I think that was a general consensus of many people. I think maybe we wouldn’t have what we have now, which is imminent threat of nuclear weapons, if we had dealt with North Korea when we should have.

Q. What do you remember most about being in Korea and the war?

A. Just that the people were so poor and the [North Koreans] wanted to fight. You know they were communists and the Cold War was in full swing. It divided the peninsula and we wanted peace and some North Koreans didn’t want that and they wanted the whole peninsula.

Q. Did the capturing of Seoul kind of change the morale or the outlook of the war?

A. That was great oh my God. That was so great we were so happy. We thought the war was all over. Of course then the Chinese got involved.

A. Oh, we were just watching the frontier and reinforcing the 38th They were assaulting once in a while and we would have to shoot at them and go back into our foxholes. They gave us some trouble but not a lot. It was nasty how the weather was. God, it was cold and sometimes hot, just terrible. It got very boring, very boring but it was day after day.

Q. Did you help reestablish the people of South Korea?

A. Yeah we did a lot of work. We helped them with their homes especially. We had carpenters and plasters. A lot of them were blasted out a little bit and we tried to help with the reconstruction. Also, I was helping some of the children. Mainly guarding the frontier up there that was about it. Nothing was happening, for you it was probably very boring. Very rarely any action.