Wednesday afternoon February 20th, a group of us went to Foyer Saint Simon. Here, a group of Moroccan men live. While combined they spoke a mix of French, Spanish, Arabic, and different types of Berber, we interviewed them in French. Hence, those who have French spoke and later translated it for those of us who do not. Despite the language barrier, the men were extremely courteous and friendly. They offered us delicious mint tea and we shared some pastries we brought them as well. Here is the story, as was translated for us:

They got the house in ’82 and is a place for men from morocco to stay either temporarily if in transit, or permanently in the case of the retirees. All the men come from the Middle Atlas region in villages near each other. They did not immigrate together; the oldest (age 86) who only spoke Berber, came to France when he fought for the French in World War II. He came back to France in 2005. The Imam arrived in the 1980’s. The youngest who spoke mostly French immigrated with his father when he was 8. He is now 22 and originally went to culinary school, but his ideas for the future have changed and he does not want to pursue that career anymore. He says that his life now is in France, his friends and his girlfriend, who he is planning on getting an apartment with soon. The Imam is married with two girls and one boy. The oldest man has five kids, four girls and one boy, who all still live in Morocco. The man who talked to us the most has kids that now live all around the world. They do travel back to Morocco a couple of times every year, but the men have to spend at least six months in France because of French retiree benefit stipulations. They say that originally the migrants that came with them experienced bad living conditions, but that they themselves did not experience much discrimination. The Imam practices alternative medicine the origins of which are from the Qur’an. He explained how the medicine is very reputable and that other Moroccans come to him for healing. The Imam also gives Qur’an classes in addition to the whole house practicing praying five times a day in a prayer room. ‬

I think we all enjoyed the visit to the home. Because 3 generations were present, we got to hear 3 different perspectives. It was also interesting to observe the differences in the way they carried themselves and dressed. This is evident in the pictures of the men. We look forward to comparing this experience with those we have in Morocco and hearing the other side of such stories. 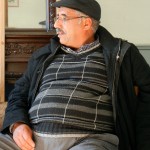 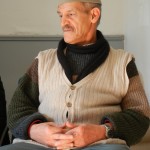 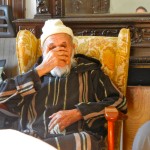 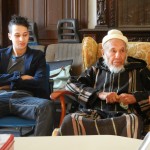 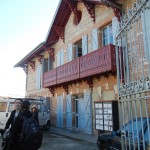 Outside of Foyer Saint Simon 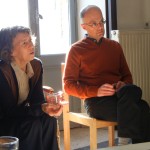 Professors Toux and Borges listen to the migrant’s stories 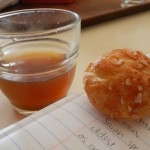 This entry was posted in student-stories and tagged Toulouse. Bookmark the permalink.