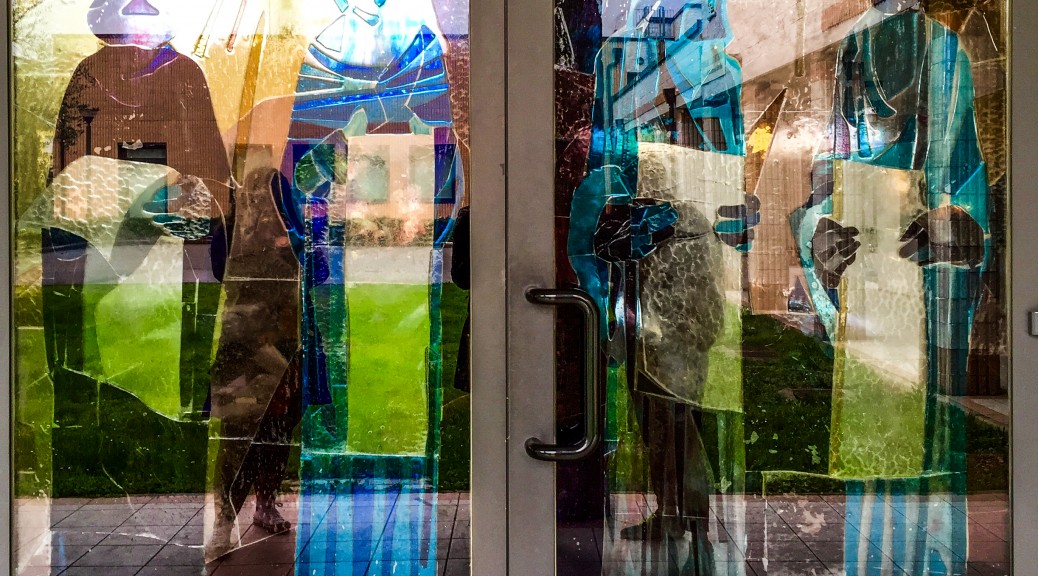 Trying to find Prato’s Catholic Church, we are let off the bus in an empty parking lot with a wall lined with graffiti. “Born to take care of oneself from destruction.”

Surrounded by concrete and industrial looking businesses, we set out in search for Parrocchia dell’ascensione, Prato’s Chinese, Catholic Church. A gray, drizzling day, we walk through a nearby narrow street, dilapidated structures lining its ways. Broken windows, crumbling exteriors, garbage, and various debris mark the buildings. Aesthetically Prato is more diverse than this snapshot, but reflecting back on this particular space at the end of our day in the town, one can’t help but wonder who takes up home in that neighborhood. Prato is home to the largest Chinese community in Italy. In regards to the Chinese population, the recorded number in 2008 was 9,927, yet local authorities estimate 45,000 to be the more realistic number if one includes “illegal” immigrants. The Chinese Catholic church, in addition to being a place to worship, might also be seen as a hub of sorts for the Chinese community. We’re welcomed in to the nave of the church which seems a different world than our initial view of the town. The church’s marble floors and incredibly high ceiling were coupled with marble statues and extensive stain glass windows. Despite its size, the church was only about a sixth of the way filled. After mass given exclusively in Chinese, we set out for the community room to speak with some Prato residents. We met Thomaso and Paolo, two fairly young Chinese men who shared with us some details of life in Prato. Translation was a bit difficult at times as Thomaso and Paolo spoke Chinese and their translator, a priest, spoke Italian. Translating and retaining the true essence of what was said is difficult enough when filtering through one language let alone two. This meant, for an English speaker like me at least, I missed those important cues and nuances of language and instead heard only the literal words. Even so, the things Thomaso and Paolo had to tell us were striking.

The Chinese community in Prato doesn’t have much contact with the Italian population except in terms of work. Most of the community works in textile factories, having to settle for poor wages and extreme hours. Many work up to 18 hours, 7 days a week. They literally sleep, eat, and work, and if 18 hours are spent on work that leaves only six for other needs including sleep. How they had time to meet with us even, was unclear. Thomaso says they came from working in sweatshops in China only to be working in sweatshops in Italy. He tells us “everything you wear is from China. It was made in China and if not China, Prato.”

Many employers take advantage of the situation Chinese Immigrants are in and manipulate and force them into circumstances of such extreme work. Often times the employer will take their documents when they first arrive and make them pay to retrieve their own documents. The problem, says Paolo, is that work in Italy is unregulated. In China his factory job commanded just 8 hours a day, 5 days a week. Here, it’s a different story. In fact, companies provide housing for employees to maintain control. Any wages earned are saved or sent home. The difficulty with sending money home are the phone calls that follow. It’s not uncommon for immigrants to tell their families about the terrible working conditions and be met with disbelief. If money is being sent home, the logic goes, things must not be that bad.

Relations with home differ for each individual, but Thomaso estimates about 20-30 out of every 100 (im)migrants return to China. Additionally, babies born here are sent back to China until age 15 in order to preserve their culture. It is clear that community ties are strong both locally and abroad. After the interview, we all went to a Chinese restaurant for dinner. On the cab ride over I check my suede jacket’s tag and the tongue of my sneakers only to find “Made in China.”