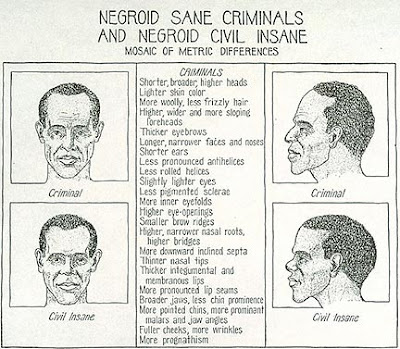 This eugenicist poster presents the differences between different African faces, highlighting the features of the so-considered “criminal” and “civil insane.”  I found it to be a good demonstration of the belief within eugenics that someone’s facial features could be used to determine their personality type.  Eugenicists believed that one’s personality could be determined by their appearance.  Having a “shorter, broader, higher head” for example could classify one as a criminal according to this poster.  Biology and anthropology were used as both logical proof and a moral conscience for these claims.  It was thought processes like this that allowed for racism to flourish from eugenics in interwar Europe.

Another interesting aspect of this poster is the fact that it comes from Britain, where eugenics were supposedly based more in social class than in race.  It helps to prove Stone’s argument in Breeding Superman that racial eugenics were more prominent in Britain than the nation’s eugenicists preferred to lead on.  After the atrocities committed by Germany that used eugenics as their logic were exposed, Britain claimed that their eugenics programs were based around preserving the traditional class system that had been becoming obsolete.  However, as an empire that spanned almost all the continents of the world, as well as the peoples of different races that resided on them, Britain felt it necessary to assert its dominance over the natives of their colonies.  Therefore, eugenics was used to “prove” white supremacy.  This poster shows how the British did this by using the reasoning that Africans were naturally savages who would disrupt the social order with their “natural” tendencies toward violence.  Documents such as this could have easily manipulated the mindsets of the middle class through its fear tactics.

After having become aware of how British eugenics were based around similar ideals as those in the more extreme Nazi Germany, it fascinates me how one country used these ideas to justify a mass genocide, while the other fought against these actions.  Could Britain have eventually reached a tipping point that would have caused the nation to undertake similar actions as Germany?

One thought on “British Eugenics: Race Versus Class”