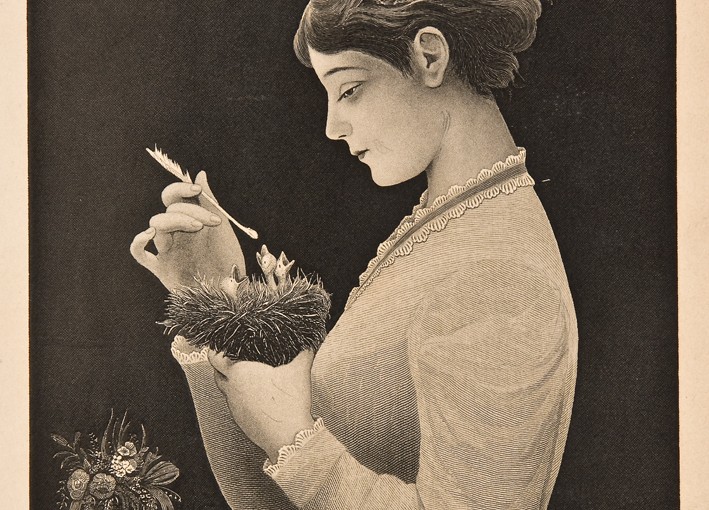 Two points about the connections between the picture above, Feeding the Motherless, by the Illman Brothers, and The Woman in White by Wilkie Collins.

One, her face. Not that she isn’t beautiful–although it would be truthful to note that her face is not crafted to the perfect subtle beauties in some of the other prints. Her eyes have a little strangeness to them in the way they droop, and her lips lack the perfect delicate fullness of, perhaps, the one in Expectation.

Yet from her neck down, there is little, if at all, one could point out to be at fault. The somewhat simple dress (of all colors, white) traces the graceful shape made by her figure, and the fabric of her dress makes slight creases about her arms. And even more so, her hands are crafted to perfection. The one holding the spoon has the most elegant curves, the fingers bending tenderly, and the other holds the nest at a becoming angle. Both are softly shaded.

This reminded me, in fact, of the female characters of The Woman in White. Marian is described to have a very becoming figure, then an ugly face, for one. (With a mustache, hence my pseudonym) Laura Fairlie, more interestingly, is described more on the basis of her body than her face also. It is her bosom and her ribbons that brush against Walter Harwright and make his heart beat, not, for example, her full lips or her wide, sparkling eyes. It makes me wonder, then, if Laura was actually the perfect beauty at all. Perhaps in the standards of the time, she was so well adorned by her figure, her white dress, her passive loving nature and her status as an heiress that she didn’t need those pearly teeth and long eyelashes at all. The only person described to be handsome regarding the face was actually Count Fosco–the increasingly feminine male villain with beautiful eyes.

The second thing I noticed about the picture was still about the face. I don’t take any problem with the distance it has from the “classic beauty,” at all. But something about her expression is still troubling. The woman in the picture doesn’t actually seem to be looking at the baby birds. Her gaze lies somewhere between then and us, the viewer. What is she looking at? We don’t get to find out, but only that she isn’t really concentrating on the task. Is she “feeding the motherless” because she wants to? Despite being engaged in what must surely be a very maternal, loving action, her expression yields no tenderness, no affection or pity at all. This is, to say the least, troubling. What’s going on in her mind…?

I wonder if this is, in a way, also a connection to Laura Fairlie. We never get to find out her thoughts, and never get to hear her voice. Although we didn’t get many hints on whether she was actually not what the people around her thought her to be, it is true that the narrators (especially Walter Hartwright) may have consciously and unconsciously manipulated the story to reflect their own perceptions.

I also wonder if Laura cared about animals all that much. Count Fosco (again) was the one who was good with animals, and Marian was the person who took care of Mrs. Catherick’s wounded dog until its death. Laura Fairlie too had a dog, which strangely disappeared after her marriage and she didn’t seem to look for it… The image of the tender-hearted naive beauty who sings with her birds, then, may not be Laura Fairlie either.