One of my favorite images that we looked at in the Trout Gallery is titled St. Valentine’s Day by the Illman Brothers. 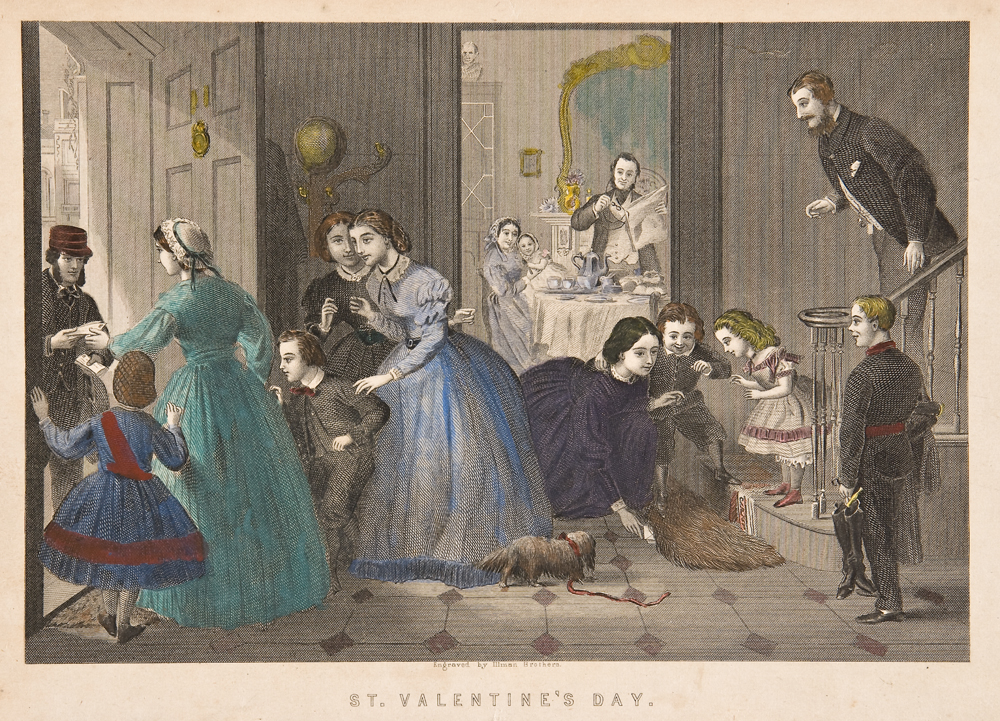 This image shows what I assume to be a family or a large group of close friends celebrating the holiday of Valentine’s Day. We can see that the group of people in the picture are in an upper class based on their clothing and the decorative elements within the house they are in. What I like most about this image is how the artist made it mostly in black and white with just a few pops of color.

In William Rathbone Greg’s article, “Why Are Women Redundant?”, he discusses his issue with the fact that he finds many women in Britain to be redundant because they are not fulfilling their duties by marrying, serving their husbands, and having children. Greg would appreciate the image St. Valentine’s Day because in it women are anything but redundant. The artist put pops of colors into the outfits of the women, drawing the viewers eyes to them and making them  the subject of the image. All of the women we see in the image are right next to or touching children. One woman is holding a baby, one woman looks like she is playing with two children, and there are three women who appear to be watching over two other children. We also see one of the women taking care of the household duties by answering the door and receiving the mail. Greg would be incredibly pleased that these women are all looking after children because he believes that women’s “minds will narrow and hearts wither if they have nothing to do, and none to love, cherish, and obey” (Greg 159). One woman standing in the back of the image is the only woman without color on her dress, perhaps symbolizing that she is a servant of some sort. Greg would also approve of women as servants, because he believes they are fulfilling their purpose and are not redundant.

While there are many aspects of the image that Greg would like, he would probably have an issue with the ratio of men to women. There are more women than men in the image, which means some of the women must be unmarried (*gasp*).

One thought on “Greg Would Love St. Valentine’s Day”