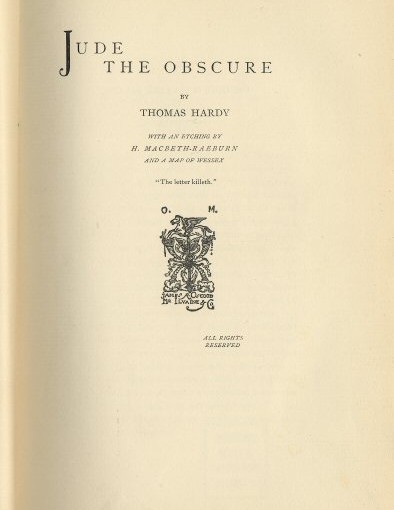 Queerness, according to Holly Ferneaux, is “that which differs from the life-script of opposite-sex marriage and reproduction.” Jude the Obscure by Thomas Hardy, as a whole, is a fairly unusual example of queer relationships. Jude Fawley and Sue Bridehead each weave in and out of their separate marriages, divorces and remarriages with their other partners–Arabella and Mr. Phillotson. They do get together at some point, but not only do they never get married, they stay together without having sex for quite a while. In other words, while the relationship is heterosexual, the main characters have children but never get married with each other.

The moment of conversation between Sue and Mr. Phillotson–Sue’s husband, later left and divorced–in particular is an interesting moment. It reveals Sue’s perspective of marriage that must have been quite unusual, as she acknowledges herself, at the time.

The beginning half of her claim is that if married people are not happy together, there should be something done to free each other. While this might have been quite a radical thought in the Victorian era, this in itself is not very peculiar. One should note, however, that Sue wants from the conversation is not divorce. Breaking the marriage is not within her interest, whatever reason may be. Instead, what she asks Mr. Phillotson is to let her go and live away from him–essentially, with Jude. When Mr. Phillotson asks her if she would be alone when she moved away, then Sue admits reluctantly that “if you [he] insisted, yes. But I [she] meant living with Jude.” And when he asks back “As his wife?” she answers, “As I choose.”

While her answer does not necessarily mean that she would be living with Jude as his wife, it does suggest that even though she is married, she has the freedom to be another’s partner as well. The use of “wife” is also interesting, as it is not a partner of something else of the sort, but a word that explicitly referrs to marriage. Because Sue is not suggesting a divorce or breaking her relationship with Mr. Phillotson in any way, this can only suggest a polygamous relationship.

The polygamy dives further in as Sue explains that she does actually like Mr. Phillotson. One could wonder if this genuine, or is just what is said to make her husband feel better and therefore lend a better chance of convincing him. The context could certainly justify for the latter, looking at the passionate way by which Sue presses her point. Yet the way she calls him a friend, and reflects upon her own affection of him and how different being in intimate terms with him is from her guesses from before, suggests that she indeed has some genuine feelings for him–just not that of love.

Is her desire–or decision–to keep the marriage while leaving away, then, an act for Mr. Phillotson to keep him from going through more pain? Or does she actually desire having a relationship with both him and Jude? It is difficult to tell, but it is worth noting that Mr. Phillotson writhing under her words seems to be causing quite enough pain already. Her living away with another man would be quite enough a scandal; no better than a divorce, if not worse.

And the line at which the conversation ends is also quite funny. She remarks, upon hearing Mr. Phillotson lament that she is in love with Jude, that he may go on thinking what he wants to think, but asks whether he thinks “if I had been I should have asked you to let me go and live with him?” Her suggestion that she might not be in love with Jude, either, when she is so strongly asking to go and live with him, is even more bezarre. To be in a polygamous triangle is one thing, but to imply that she may be in love with neither of them is indeed, even queerer.

The link at the Victorian Queer Archive contains the text of the conversation, as well as Thomas Hardy’s response in his second edition to the criticism he received of his being against marriage itself.