Interview With Athen Mazias of the Hamilton Restaurant

(Nephew to the Owner of the Hamilton Restaurant)

(This interview was with Athen Mazias, nephew of John Mazias owner of the Hamilton restaurant. The purpose of this interview was to learn about Athen’s family history in Carlisle and how they have been able to stay in business since the 1930’s. I also used my time with him to learn the history of their “Hot-chie Dog” and how it became their staple food.)

Mr Schaeffer: When was the Hamilton first bought by the Mizias Family?

Mr Mazias: The Mizias family took it over back in the mid 70’s.

Mr Schaeffer: But your uncle has been working here since?

Mr Mazias: My Uncle Tom, who is 66 now, has been working here since he was 12 years old, when he first came to the states. He was bussing tables, washing dishes and going to school.

Mr Schaeffer: Did he come to America by himself?

Mr Mazias: Kollas came over from Greece because back then, times were very hard in the village. There was a depression, war and famine, and my grandmother had so many kids to take care of. And a lot of families were like us. I mean very poor. Kollas brought them over here. I forget how many, but the goal was to give them a better life, make some money, send some money back over to help out their families because life in Greece was very difficult at that time.

Mr Schaeffer: So your uncle worked his way up the ladder and eventually became the next owner?

Mr Schaeffer: When did you [Athen] start working at the Hamilton?

Mr Schaeffer: So, you practically grew up around this place? 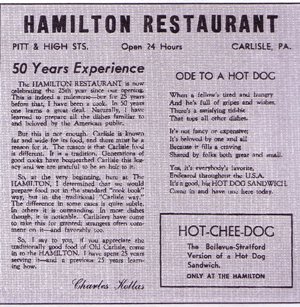 (Courtesy of the CCHS)

Mr Schaeffer: When you first started did you feel like the Greek presence was stronger?

Mr Mazias: Yes, there was a fairly large Greek community, and there still is. It was a lot more dominant back in the day, back when you were asking about like the 50’s, 60’s and 70’s. But it has sort of moved out, restaurant and business-wise. There is only a few left and it’s been hard to keep the Greek traditions going.

Mr Schaeffer: What other restaurants are still Greek owned?

Athen: The Back Door, Little John’s Restaurant, and the Hanover Grill. There used to be restaurants such as the Saint Charles, which is where the Red Devil is now. The Fem over where Blondie’s is, used to be Greek owned. Fast Eddies used to be Greek owned. There were a lot of them back in the day, but families grow up and move on, and I think kids today don’t have the work ethic of their parents.

Mr Schaeffer: Do you think that some of the loss of Greek owned business is a result of the changing Carlisle and the opening of stores like Wal-Mart and franchise restaurants like Chilies and Red Robin?

Mr Mazias: I would not say they are the only reason. I mean, small business wise, there is also a lot of competition and it is very difficult to compete. Unless you have the name like we do [Hamilton restaurant], I mean, we have been here for years and people know what they are going to get here. That doesn’t change.

Mr Mazias: Oh yes, you can tell that with not just the regular customer, but also through Dickinson alum who went to school here in the 70’s, and how their nieces or nephews or daughters or sons go to school here now, you see that. They come in here.

Mr Schaeffer: Yes, that’s how I found about this place, through my friend whose uncle went here in the 70’s.

Mr Schaeffer: Do you think since you started working here a lot of other business’s besides Greek business have changed as a whole?

Mr Mazias: I think that downtown has changed slightly for the better. It’s a lot cleaner. Ya know, like there is no more Plunket. Ya know, places like that were pretty run-down and they recently have been bought and turned around.

Mr Schaeffer: Do you think that Carlisle’s new restaurants have had an impact on your business?

Mr Mazias: I’d say we have our ups and downs. I mean I can tell slightly. But we’re pretty much consistent all year around but you can tell that there has been a little change because of all this knew competition. It’s very hard, but we also don’t push it. We hardly ever advertise.

Mr Schaeffer: Do you see a difference in the customers?

Mr Mazias: Yeah, you don’t see the strong student following like you used to. Not since Dickinson built that cafeteria that is supposed to be state of the art, or whatever. And there are so many places and so much variety. You can go anywhere you want including Camp Hill and Mechanicsburg. It’s hard to regain that student following. The 70’s and 80’s were different; you can tell that it has changed. This used to be the place for Dickinson students.

Mr Schaeffer: So, since you first started here until now, has there has been quite a large change in the cliental?

Mr Schaeffer: Do you think that more and more people are being persuaded to go to places like Chilies because they are big chains and are willing to sacrifice the heritage and culture that you guys provide?

Mr Mazias: I don’t know to tell you the truth. If they want to go to the Chilies or franchises they can, but they’re not my number one choice, but you have to put up with it. What are you going to do?

Mr Schaeffer: How do you think your family’s culture has influenced this restaurant?

Mr Mazias: I think a lot of it is because as long as our family owns it [Hamilton] and people know what their going to get. Quick service, good food, etc. You’re not going to wait for junky food. It’s always consistent. We don’t change. Our ethics and tactics may be a little raw, but you know what, it’s our system. Speed and quality is the key. Breakfast, Lunch and Dinner.

Mr Schaeffer: Do you guys also speak Greek amongst each other?

Mr Mazias: Yeah, I mean the majority, that’s one thing my uncle likes to do. He likes to keep things as close knit as he can. But, like I said, the longer things go on year after year, it is very hard to keep that Greek click together. The older you get the harder it is.

Mr Schaeffer: How does speed play into your restaurant, especially the Hot-chie dog?

Mr Mazias: The Hot-chie dog has been made here since 1937, but the name came about through Dickinson students in the 50’s. It’s like a cult.

Mr Schaeffer: Do you think that there are any other restaurants in Carlisle that represent family and culture the same way you guys do?

Mr Mazias: I think you still have John’s restaurant. Also family run for years and they are also Greek. But other than that, not really because it’s really hard to keep it going. Like Rillos, for example, once Joe [past-owner of Rillo’s] passed away the place has never been the same.

Mr Schaeffer: Do you think that John’s restaurant is similar to yours?

Mr Mazias: Yeah, but we have the Hot-chie dog. And that’s something that nobody else has. It’s that signature thing that keeps us afloat. 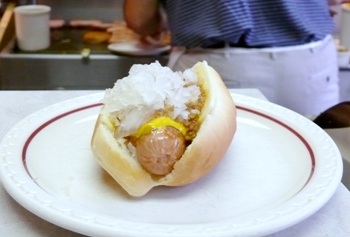 Mr Schaeffer: Since your uncle started working here, do you think that ownership and the way this place is run has remained the same despite the changing Carlisle?

Mr Mazias: Yeah, my uncle has this set standard of how he likes things run. If you take this away from him, or Carlisle, there would be a big whole to fill. A few years ago we closed for a week to go to a wedding in Greece. And while I was away I kept getting messages on both my house phone and cell phone asking why we were closed.

Mr Schaeffer: Tracking you down?

Mr Mazias: Yeah, it was kind of freaky.

Mr Schaeffer: I was told that from a member of the Carlisle Wreck Dept. that the Hamilton has forever been a staple for after sport dining.

Mr Mazias: Oh yeah, especially in the 80’s and 90’s, after Carlisle sports teems played. Like Friday and Saturday night were crazy. You couldn’t even walk. People filled the floor.

Mr Schaeffer: So what you’re saying is that the Hamilton is forever embedded in the Carlisle community?

Mr Schaeffer: Do you feel that the Carlisle community understands that? And despite a changing Carlisle, they like that the Hamilton remains constant and untouched?

Mr Mazias: Absolutely! And that’s what my uncle wants. He does not care about the franchises. He just tries to keep it consistent and simple.

Mr Schaeffer: Do you guys make any traditional Greek food?

Mr Mazias: Well, we have the chicken gyro, but we don’t do the lamb thing. We are a Greek run and owned restaurant but we don’t serve Greek food. We do breakfast lunch and dinner and that goes a long away.

Mr Mazias: No problem I look forward to seeing the finished product.