The Geography of Class

Downtown Carlisle’s traditional landscape has been represented by various family-owned restaurants for the better part of the last century. Many of these, which have become staples within the community, are still around today. While this tradition is as important as it has ever been in Carlisle, the town has adopted a new and slightly altered vision for the town’s future. This new vision includes the creation and development of niche stores, boutiques, and restaurants. In order to demonstrate the traditional versus the contemporary, I analyze two restaurants: George’s, to represent the traditional, and Piatto, to represent the contemporary. The ability to mix tradition with this contemporary vision will determine the future success of Carlisle’s downtown business district.

Carlisle: Then and Now

Representing a wide variety of social classes, Carlisle is a truly dynamic town. The downtown business district reflects the town’s diverse demographic. Carlisle has undergone significant transformations spanning the past half-century. A 1952 article appearing in the Lincoln-Mercury Times offers a description of the town encouraging tourism. “It’s a handsome colonial town with a thrilling history. It has the widest streets you’ll ever see, the oldest college west of the Susquehanna River and 16,000 people who don’t ogle strangers.”[1] Carlisle has long been the home of 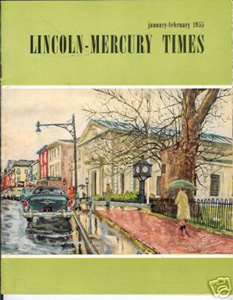 a great deal of manufacturing, creating a strong working class presence. The Lincoln-Times article goes on to note the town’s merging of social classes. “Downtown’ to Carlislers is a shopping area that runs for about three blocks off the Square in each direction. The steady patronage of college and barracks people levels out the business curve. Some 4,500 people are employed in manufacturing everything from rag rugs to electronic instruments.”[2] Fifty-five years later most would agree that the town continues closely to resemble that very description.

As a result of its diverse social landscape, the town has repeatedly attempted to create an atmosphere that appealed to each of the different class representations. At the forefront of the town’s priorities have been the preservation of Carlisle’s historical characteristics. A 1964 statistical analysis cites a recent attempt to preserve and re-develop some of the town’s buildings in and around the central business district. 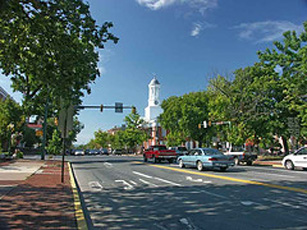 The borough has an exceptionally fine heritage of early buildings and is fortunate that its residents appreciate them. Three years ago ‘Project 61,’ a cooperative effort of property owners, was begun to preserve and enhance the borough’s special character. An architect was engaged and more than 75 renovation plans were prepared. Many of these plans have been executed by owners both in and outside of the central business district, and more are scheduled for future execution.

Interestingly, despite frequent attempts to transform the downtown in some form or another, Carlisle’s businesses have always been able to maintain the town’s down-home feel. A brochure published in 2000 by The Sentinel, Carlisle’s newspaper, boasted that “specialty, clothing, and antique stores as well as many restaurants line the tree-covered streets of this quaint community.”[4]