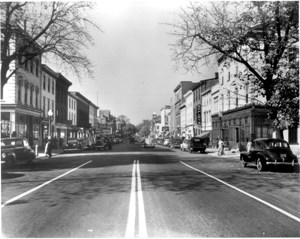 As popular as the car shows are (sometimes attracting an excess of 100,000 patrons), one place that does not reap from its benefits is the downtown area. While people often pass through the town, few actually stop, and even fewer actually shop. When they do stop, most of the attention is directed towards the restaurants, not the shops.[1] Recognizing this, as well as the increasing number of vacant storefronts in the downtown area, merchants came together to try and solve these problems. Starting in 1976, the Cumberland County Redevelopment Authority began a central revitalization project that focused on increasing parking, new sidewalks, and attempts to improve the overall look of the buildings in the area.[2]

This Authority stems from and continues work done in the 1960s. Originally adopted from a Hollidaysburg, Pennsylvania project known as “Project 60,” a committee was formed in Carlisle known as The Carlisle Beautification and Restoration Association, but it was more commonly referred to as “Project 61.”[3] “Formed on March 22, 1961, [The Carlisle Beautification and Restoration Association was established with the] purpose of encouraging property owners and tenants to take a renewed interest in the appearance of their business establishments.”[4] By doing this, the community hoped that it would “…be more friendly and inviting for residents, shoppers, and travelers.”[5]

This decline, however, was actually predicted in a February 1960 development plan entitled “Comprehensive Development Plan for the Borough of Carlisle, Cumberland County, Pennsylvania: Pt. 1, Planning Studies and Analysis.” In it, the current structure of downtown shopping was accurately described as “…divided between three locations – the central business district and two other centers located at the edge of the borough” (The MJ Mall site and Carlisle Point). 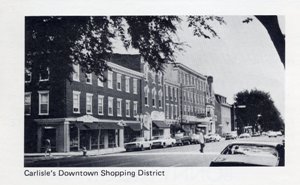 [6] It was described that “such a division of retailing into separate areas instead of concentration into one area is inefficient [because] it results in a tendency for the three areas to compete with one another.”[7] If the Carlisle retailing area continues in this direction, one result that was predicted would be “one retail center could develop at the expense of the other two – for example M.J. Mall which has the greatest accessibility to the sub-region.”[8] The Bureau also said that “the Central Business District is suffering from problems which are characteristic of a town of its age and size – a lack of parking, congestion, and the absence of one or more larger stores (a department store or a supermarket) to attract trade.”[9]