Carlisle In The 1990s and Beyond 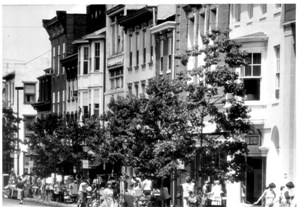 Since the 1990s, downtown Carlisle has focused on increasing patronage to downtown shops, aside from the restaurants. Through the years, organizations like the Cumberland County Redevelopment Society have done such consistent and good work that they have not only lasted to current day, but they also have allowed other similar organizations and ideas, like the “High I Project,” to develop. One major debate that has been happening since the 90s was whether the establishment of big box stores is a good or bad thing for the development of the community, and whether it is hindering the progress of downtown Carlisle. There is a split in the community over the answer to this.

First of all, some of the local residents and merchants feel that “if downtown Carlisle is going to thrive as a commercial district, residents living in the surrounding neighborhoods must buy local.”[1] This coincides with some of the previously established project plans and organizations that called for this local shopping, which by default would increase attention and care by the local residents in their downtown shops. But this strategy extends further than just the local buyers. Some of the organizers and merchants feel that “what the downtown needs is more specialty shops.”[2] They feel this way because even though there is a Wal-Mart on every corner, “…they don’t draw tourists.”[3] They feel that in order for the interest to increase in the local downtown, it must offer something different that Wal-Mart or K-Mart or Lowe’s or any other big box store will not have.

The other side of this argument, a view that is shared by Ms. Champion, is the thought that “Wal-Mart has been a positive influence on the Carlisle retail community.”[4] One reason for this is that with its opening, Wal-Mart, Lowe’s, etc. has kept local residents from having to travel to places like Mechanicsburg and Harrisburg to shop at a big box store, and even though they are shopping there as opposed to a local shop, it also increases the chance that they will shop locally, whether on the way there or back, than if they went out of town.

Another reason why big box stores are beneficial is that Wal-Mart occupies the old MJ Mall site on South Hanover Street and Noble Boulevard. This area was a mostly abandoned strip mall that was renovated for Wal-Mart’s arrival. Soon after it opened, so did Applebee’s, Ross, TJ Maxx, and Subway, just to name a few popular chains that opened in the same strip mall, mainly because Wal-Mart “opened the door for them.” Ms. Champion agrees with this, stating “I think once Wal-Mart came to Carlisle, that attracted places like Home Depot, Lowe’s, TJ Maxx, Ross, [and] that whole development there along with Target, Pier One, Old Navy, [and] Starbucks.” [audio:champion-clip.mp3][5] Also, according to Evelyn Lebo, “the Wal-Mart location was a factor in attracting a Lowe’s, [which is now] located at Carlisle Plaza Mall.”[6] So with the establishment of Wal-Mart, more stores have not only been attracted, but have had the opportunity in Carlisle.