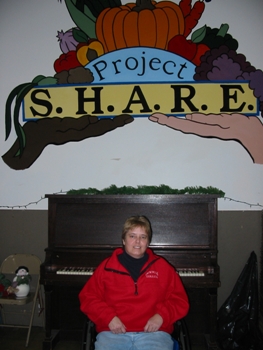 Conducted by Christina Torres, American Studies Major, Dickinson College Class of 2009 On November 30th 2007 at 9:30 AM

C: I am interviewing Elaine Livas. She is the director of Project S.H.A.R.E. Elaine would you mind saying your full name, spelling it, and your age please.

C: Thank you. How long have you lived in Carlisle?

E: I came to Carlisle in August of 1979. Right after the Three Mile Island accident, and I came in as a freshman for Dickinson College.

C: It is my understanding that you are the director of project share, here in Carlisle; can you explain a little bit of what you do here and explain what Project S.H.A.R.E is?

E: S.H.A.R.E stands for Survival, Help, and Recipient Education. Project S.H.A.R.E is a food pantry. We serve about 900 low income families with supplementary food boxes. Our geographic service area is mountain to mountain. North Mountain to South Mountain, Plain Field to Middlesex, and we serve boxes of about 50 food items boxed, canned, and fresh food items to families. It includes food, and baby formula for families. In addition, we serve clothing to people and then we have nutritional classes, cooking classes for our children and adults. To help them use the food that we give out so they know how to prepare it, how to store it, how to use their resources to maximum.

C: Can you describe the scene at the Molly Pitcher during that time?

E: The building had virtually no heat. When you would go into some of the rooms at different parts and time during the day there would be ice on the commode water. The hallways were not safe to be in, particularly at night. I remember on more than one occasion people would be beaten up. There was a fellow in there (Living at the Molly Pitcher) that some kids we’re fooling around with a fire extinguisher and he went out in the hallway to tell them to knock it off, and they beat him so badly that he ended up in Health South, which is a rehabilitation center [for people] with brain injury and he could never live on his own again. People would break into the rooms. They were fairly easy to break into the rooms and beat up somebody only to find out they had the wrong person. Rape was not uncommon. It was a really scary place to live in- certainly to be a child in. People would often take kids over to the bar next door because it was warmer over there. If you were part of the community and lived at the Molly you were safer than an outsider certainly. But, it was not a safe place to live and certainly not a safe place if you were a child.

E: Yes, I was also running the soup kitchen at the time, Project S.H.A.R.E ran a soup kitchen from May 1984 to July of 1995 and during that time we would take meals over to the Molly Pitcher and take them upstairs to people. The people who would go with me to deliver the meals would tell me what a wonderful place the Molly Pitcher use to be. I remember one person telling me that they proposed to their wife in the Molly Pitcher, and I said, “Well, did she except? He said, Oh, yes it was a wonderful place. It was THE place to go.” So, I knew that it was a wonderful place, but money was not put back into the Hotel to keep it up. If money is not put back into a place, and the clientele is not kept up, slowly it starts to disintegrate and then the cliental goes down, and people stop respecting the place, and it just deteriorates more and more.

C: Why do you think that there is such a decline in Hotels and lodging in the area? Not just because of what you said about clientelebut specifically looking at the influence of the downtown, why is there a decline in lodging and hotels, such as the Molly Pitcher?

E: Well, I think also in this case in town that people needed a place to live and I think that places get a reputation. The Molly Pitcher got a reputation as a place to actually live, as a resident hotel. I wasn’t around when that transformation started to happen, but by the time I came to Carlisle, the Molly Pitcher was know as a resident hotel. So people weren’t going just to stay for a week, people I was serving had lived there for 15 to 17 years and thought of it as home. However dilapidated it was. This was their home, in fact, there was a fire there and people protested outside because they wanted to go back into their home. Even though it was know as a crummy, roach infested place to live, people wanted to go back into what they called home. So, I think that people needed a place in town to be able to get to services- human services, to get to the soup kitchen. They didn’t want to be in a Motel, in a place outside of town because they didn’t have a vehicle, so they needed an in town Hotel to live at. There is very, next to none, public transportation in Carlisle compared to a city, so that they can’t be at a motel, so they need to be in- town the Molly Pitcher was The place. If you think now about low Income people as they spread out, they have a lot harder time accessing human services because they can’t get to places the way they could when they’re right in town.

C: Beyond being able to travel or go in and out to find human serviceswhy do you think in Carlisle in particular, there’s been such an increase in human services, and a decrease in this culture that was once here, where people would go to the Molly Pitcher, or the James Wilson to have a good time. There were shops where women could buy furs. Why do you think that there is such a difference in culture and social structure here in Carlisle since the 1950’s up until the time you started Project S.H.A.R.E? I know it’s a complicated question.

E: I don’t know if I’m fully qualified to answer the question. In the time that I have been working with project S.H.A.R.E, what I do know is that because Carlisle is the County Seat, that the human services in the communities have strengthened and that that is a good thing. Sometimes there’s the criticism of why are there so many people here that are in need, and I don’t think that’s a bad thing. I think to be known as a community where people who are suffering can come is a good thing, not a bad thing. As far as places that people can go for fun and social events, I think that’s also here in the community, and that Carlisle has a good balance of that. It depends on who you talk to in the community and what social level you’re on, but Harrisburg, Baltimore and Philadelphia and Washington are all within a two hour drive. They aren’t accessible for the poor, but they are certainly accessible for the middle and upper-class, and people take advantage of that. There are several events that highlight local social activities for the people who have the money to reach them.

E: I guess it depends on whether you’re an optimist or a pessimist. I’m an optimist. One of the things that we recently started is a computer database which allows the social services and churches to work together and to share information. So often confidentiality issues keep us from sharing information about people in need, so the spirit needs to be not to share information which keeps people oppressed, but to share information because we want to help people get back on their feet, and that has to be the spirit behind it. Not to oppress people or to black ball people but to say this could be me. I want to help them, so that they are back on their feet and part of our community, not to marginalize people. If we work together with that spirit then we can be strong as a community, but we’re only as strong as the weakest link in our community, the weakest people in our community. When we divide ourselves as a community, and it’s the people at the high end of the community, versus the people at the low end economically or socially, then we are divided and we don’t see ourselves as needing each other. By doing this we weaken our whole community. So, the idea behind Project S.H.A.R.E. and the idea behind the Molly Pitcher Project was to bring people together who wouldn’t normally rub shoulders just walking down the street. To show people that they are not that different, that there are more things that we have in common than we have different about each other, and that in a moment, in a blink of an eye, you could be the person living at the Molly Pitcher. How long does it take to buy a lottery ticket and be the person living in a beautiful house? How long does it take to get into your car and be sitting in a wheel chair? We have this illusion some how that our place in life was all our doing, and it’s going to stay that way, and the wonderful and terrible thing about life is that it constantly changes. For the person that lived at the Molly Pitcher or in a home on Maple Street and had a wife and three kids and everything was going great, and their family was killed in an accident and they couldn’t recover and they find themselves living at the Molly Pitcher and struggling with just daily life, they are not any different than us. If the community could see that and wrap their arms around those people and say, ‘yes, you are a part of our community, and we need you as part of our community’ If the community could see that what Project S.H.A.R.E is all about is spaghetti sauce and tuna fish, but saying that you live in our community, whether you live in a hotel or a motel, or a house on Parker Street, you are part of our community. You live in the same time, you live in the 21st century or the 18th century, you live in my century your sharing life together with me, come live with me together. That’s what Project S.H.A.R.E is about, that’s what the Molly Pitcher Project is about.

C: Well, thank you very much for the interview.