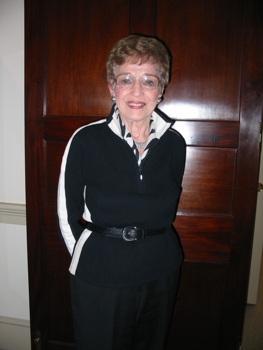 C: This is my interview with Marguerite. Can you say your full name and your date of birth for the record?

M. My name is Marguerite Grove-Harnish. My birthday was January 22nd, 1922.

C: Just so you know a little more about my research. I’m doing research on hotels and lodging in Carlisle. The hotels that I am specifically looking at are the James Wilson and the Molly Pitcher Hotel. I have just a couple of questions to ask you: how long have you lived in Carlisle?

M: All of my life, ever since I was a little new baby.

C: Can you describe to me how different the downtown area is now then when you were growing up.

M: There is a terrific difference. Downtown is not at all like how it use to be. I had a store in downtown Carlisle so I can defiantly see the change. They are working on trying to get it back, but they never will get it back the way it was before. There’s no way that they could do that.

C: Do you have any reasons as to why you think this is?

M. All of the nice stores that we had are either no longer operating, or they have moved away from the area. For instance, downtown, we don’t even have a dress shop, or lady’s store. We have mostly restaurants and antique shops, which is very nice but it’s not the main thing people shop in downtown

C: Can you describe a bit more about your store?

M: My store was a large store, and we were ahead of our self at the time. We were more progressive than the other stores. We handled dresses, coats, lingerie, jewelry, and hats. Just about anything a lady would want to have. And we had nice things, good brands.

C: What year did you open up and where?

M. The store was opened up before I even went there. I worked there starting in the late 40’s and then in the early 50’s I became manager and then I was manager and buyer up until 1973.

C: What was the store called?

M: It was called The Hub and after I retired from there I was home for a year, but I just wasn’t happy being home all the time so then I got a call from a gentlemen in Camp Hill, who said that he had heard about me and he asked if I would be willing to come down there as a supervisor and a buyer. So I went to Spliters in Camp Hill, which is no longer there either. I worked there for 10 years.

C: So, you said that you don’t think that the downtown would ever be the same…

M: It would never– it couldn’t possibly.

C: Could you give me an image of how Carlisle was for you growing up in comparison to now?

M: Well, for me growing up, my mother would bring, I have two sisters, so she would bring the three of us into town, and we would go to Richie’s drug store, and we would go there and have a coke and they had booze, the old time booze. In the center, they had little round tables with those cute little drug store chairs. Before school would start my dad would take us to Sadie’s dress shop, which was very nice, and he would buy us our outfits to start school. It was just a nice homey, friendly town.

C: Were there plenty of people up and about on High Street?

M: There were a lot of people. When I had the store, we would be so busy it was unbelievable. We would just be so busy all the time. We has faithful costumers who would come in year after, after, year and shop at our store.

C: There is such a difference…

M: There’s such a great difference. I don’t shop in downtown Carlisle anymore because there is nothing there that I want.

M: The Molly Pitcher, when you mentioned that and you wanted to go to dinner at a special place, that’s where you would think of going. As you entered the lobby you could tell that you were in a more elegant place. It was just nice, and then as you approached the dining room, it was light and bright. There were French doors there, and they were glassed French doors and it just seemed bright and light. And of course the table cloths- nice real table cloths, and the maitre d’ would come, and he’d have his white napkin over his arm and it was just special. When I had the store we would have the Retail Merchants Bureau board meetings there. We had fashion shows there– yes, it was really, really nice, and the waitresses were pleasant. My grandmother- the upper, upper part, the very top of the Molly Pitcher–my mother told me that my grandmother, when it would become winter and it would get real cold, she would go in and rent one of those upper suites, which were special, special and she would stay there for about a month during the winter time. In the summer when it would get real, real hot she would go to Mount Grenta, and there, was a nice hotel there, which is no longer there but she would be there in the summer.

C: That sounds really nice. Did you ever go to the James Wilson, and if so, which one did you prefer between the two?

M: Many, many times I went to the James Wilson– I’m trying to think about that man’s name. I can’t remember the manager’s name.

M: Well, that was pretty far back, that was Swartz. But later on…I can’t remember.

M: Yes, yes that was it. That was nice, too, but it wasn’t as elegant as the Molly Pitcher.

C: Reasons as to why?

M: Why? Well, it just didn’t have the flair that the Molly Pitcher had when it was really nice. But, then when it was taken over by somebody else, the Molly Pitcher really sank to the lowest level toward the end. Now, of course, it’s being restored to rent to the elderly, or the…I’m not sure just what it is.

C: It’s turning into a Senior Citizen home, I believe. So, why do you think that there was such a drastic change? When you describe the Molly Pitcher, you described it as this really elegant and very classy place, and then the decline. It’s a sad story what happens with the Molly Pitcher…

M: It hasn’t just happened with the Molly Pitcher, but our environment has changed so much, not just in Carlisle, but overall in our country. It scares me to death. I’m glad that I’m not going to be living twenty years from now because God knows what it’s going to be like. People don’t care so much about the past and they don’t care if something is nice or elegant, or pretty. The attitude of people– they don’t dress well, they slouch around, and they have no manners. They’re coming out of school and they don’t know- some of the kids that are seniors, they don’t know how to spell, they can’t add, and they’re not getting American history at all. This is the United States of America. We should be teaching history. So, if the foreigners want to come over here, that’s fine, but they have to accept our way, our religions, and I think that is the decline of our country, not just one town.

C: How do you feel about the area of Carlisle economically and socially. Has there been a decline in…

C: In your opinion do you think that people here are of high economic status?

C: Do you have any thoughts as to why places like the Molly Pitcher and James Wilson are no longer in Carlisle and just the overall decline of Hotel and Lodging all over the country, but specifically the decline in small downtown areas?

M: Like I said, it’s the type of people we have now. You don’t need that sort of thing anymore. It’s just gone. The nicest place we have right now, if you want to go to a couple of nice places, is a dear little town of Boiling Springs, where we have the Boiling Spring’s Tavern and Allenberry. Those two are the nice places we have now. I go there many times. As a matter of fact, I’m going to the Tavern tonight [laugh] for dinner.

C: Sounds like fun. Well Marguerite, this has been great. Thank you so very much for giving me a picture of history, and I appreciated it.

M: Well, thank you for asking me and I hope you have a wonderful mark in your project [laughs].

C: Thank you very much [laugh].