Where Did All The Greeks Go- The Back Door Cafe

Where did all the Greeks Go?| The Emergence of the “Strip Mall”
The Hamilton Restaurants | The Back Door Cafe
Interview with Bill Seras | Interview with Athen Mazias

The Back Door Café (Three Generations of Carlisle History) 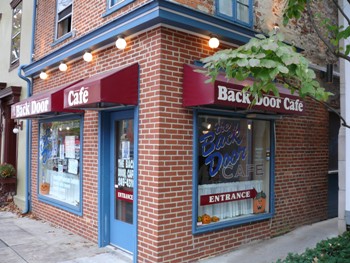 “My Wife’s Mother lives on Hilton Head Island and they have this saying called it the “island shuffle” you know you go from this restaurant to that restaurant or this bar to that bar You know you just kind of go to cretin places that you like. We call it the Carlisle shuffle you have lunch here (Back Door Café) one day than maybe Tuesday you go to Amy’s (Amy’s Thai Cuisine ) then California café but then Friday your back at the Back Door Café you just kind of shuffle around and I’m proud to be part of that shuffle. If you don’t come to me every day that’s fine but if you come here one or twice a week I’m thrilled.” (Bill Seras)

Mathew Pisano, owner of Matty’s Kitchen, told me “you got to try Bill’s Pizza. It’s the best kept secret in town.” However, when I went to eat there, just about every table had at least one pizza on it, leading me to believe that his great pizza wasn’t actually that much of a secret. Originally named Back Door Pizza, Back Door Café has been a staple in Carlisle for over twenty-five years. After talking to Bill, he told me while the name has changed, the ownership and the pizza has remained the same. However, Bill does not feel that it is just the pizza that has made him last so long, but, much like the Hamilton, it is a combination of the atmosphere and food that keeps business consistent. Bill explained that except for the initial three weeks after Panera opened at the Carlisle Plaza near Wal-Mart, his business like the Hamilton’s has been pretty constant. 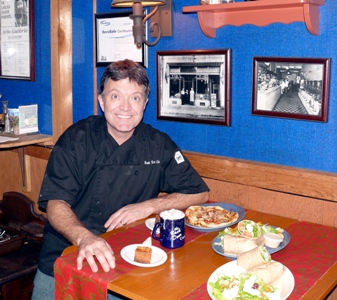 “I’m blessed, I mean I’m fortunate that I can have a business that supports my family, and at the same time I don’t have to be here 24 hours, 7 days a week. I’m pretty lucky (Bill Seras).”