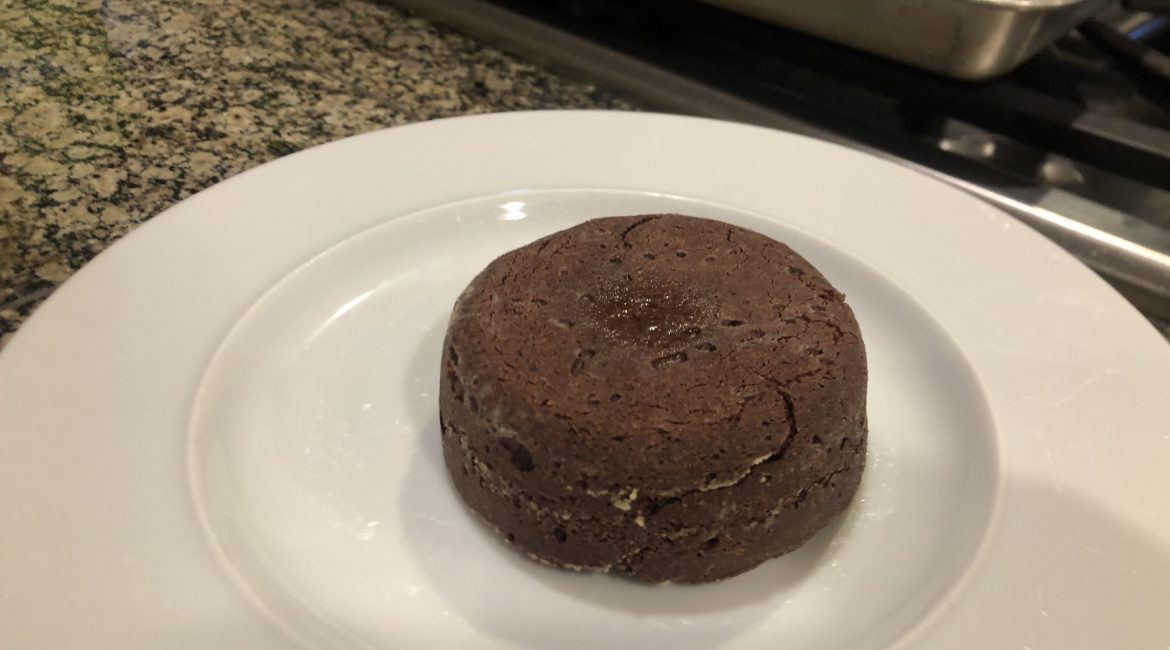 A chocolate lava cake is known is for most like all other cakes, what makes it stand apart is the “molten” core where it gets the moniker of lava cake from. This cake is quick to make with only two steps that need to be done perfectly. Folding the chocolate and egg mix, and the cooking time.

Most steps in the process of creating the cake are fairly simple, applying butter and flour ramekins, melting chocolate and butter while whisking eggs and sugar together, then folding them together, then putting the batter in the ramekins and baking.

You need to butter and flour the ramekins to prevent the cake from sticking once its cooked. Without this the cake would stick due to the sugar in the chocolates caramelizing and sticking to the ramekins. The butter is used for a surface to stick the flour to, while the flour is what really stops the sticking. This happens because the flour acts as a barrier between batter and the ramekin. The whisking of the eggs, egg yolk, and sugar has two purposes, one to add air into the batter so when cake bakes the air will expand causing the cake to rise. Two the mixing the eggs causes them to create a foam which will later be used to stabilize the structure of the cake due to the lack of gluten. When folding the chocolate and flour into the egg mixture you have to be careful of the temperature of the chocolate. If you add the chocolate into the egg mixture while it is to hot you will cause the eggs to curdle. This is because the heat from the chocolate will cause the eggs to coagulate prematurely turning the liquid mixture to into a more solid like state. (O’Neil, 2020)

With this recipe there are some changes that can be made that will affect the outcome of the cakes, such as changing the temperature of chocolate used when folding, changing the baking time of the cake, and varying the amount of flour used.

When baking the cake it is recommended to have it bake for between 10 and 12 minutes. 12 minutes being the max because the cake will end up dry on the outside and will no longer have a molten core in the center. While under 10 minutes the cake will not be baked all the way through. The main concept behind baking the cake is the conduction of heat moving through the food. Conduction is where heat is moves through the batter from the outside to he center cooking it. Because of this the longer the cake is in the oven the deeper in the cake will be cooked, but this also means that the outer layers will be drier and overcooked. (O’Neil 2020)The prime concept of the cake is to bake the cake where it is fully cooked but the core does not have enough time to change from a liquid to a solid. If you were to bake the cake longer than 12 minutes then the core will have received enough heat to have the proteins solidify their structures and become a solid. While baking under 10 minutes may result in a fully baked cake but a larger portion of the cake will be in a liquid state rather than a solid.

By increasing or decreasing the amount of flour the amount of gluten will also vary, causing the cakes end texture. Increasing the amount of flour will lead to a firmer and harder texture, while less flour will lead to a chewier sponge like texture. This is all because of Gluten. The gluten though not naturally in flour the gluten is formed from the giladin and glutenin proteins in flour that bond together to form gluten when mixed with the eggs in the batter. (Crosby, 2012) The purpose of gluten in the recipe is to add to the end texture of the cake, lower amounts of gluten will create a chewier sponge like texture, while high amounts of gluten will result in a hard textured product.