There are a plethora of differences between our modern world map and the Psaltic Mappa Mundi that Felix Fabri most likely used to trace his journey. For one, the modern world map that we use derives from satellite footage of the earth, and is therefore an accurate depiction of its landmass, water content, plates, etc. The Psaltic Map, which predates Felix Fabri’s journey to The Holy Land about 200 years, focuses less on accuracy of location and more on the importance of points relative to Jerusalem and other biblical landmarks. For example, despite their separation by large masses of water, Italy (Roma) and Jerusalem are depicted in proximity to each other, and the illustration does not depict a body of water that separates the two locations. In fact, Italy and Jerusalem are separated only by landmass on the Psaltic map, which implies that traveling from one place to the other can be accomplished on foot or on horseback, which is not the case!

In addition to the differences in accuracy and purpose between the Psaltic map and the modern world map, there is also a major difference in the maps’ orientations. Our modern world map is oriented from left (west) to right (east), and it captures lands that were undiscovered during the Middle Ages (i.e. North America). The Psaltic map, however, is circular, an attempt to depict the roundness of the earth. In addition, east is oriented at the top of the map where Jesus is depicted and Jerusalem is mapped in the center of the entire map. These were intentional choices made by the artist. East being located towards the top of the map near the deepcition of Jesus and Adam and Eve implies the region’s closeness to God, morality and purity. This ideology aligns with that of Felix Fabri, who revered places like Mt. Sinai, Mount Carmel and the Joppa Port. The farther away from the top of the map a region is, the less morally upstanding it is. 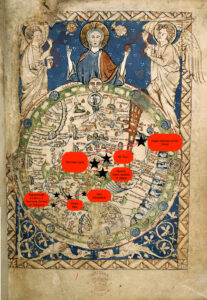 The Book of Wanderings of Felix Fabri: The Pilgrims on Land

In the final section of his travel narrative, Felix Fabri describes his departure from Joppa and The Holy Land, and he disproves the many false narratives that surround the retelling of the journey. For example, he mentions the myth that the Saracens forced him along with the other pilgrims to ride upon the backs of donkeys (or “asses”) while traveling again to The Holy Land because they presumed that they were too unholy to walk upon the land barefoot. He claims that the Saracens did not care whether he or the pilgrims walked or traveled on horseback during their departure from The Holy Land. He then describes the twenty-seven articles that the Father Guardian, their religious leader during the pilgrimage, preached to them upon their return to Mount Zion. These articles instructed the proper behavior of the pilgrims during their time in The Holy Land, kind of like the rules that tourists are given during their visits to a museum or a zoo, but much more religiously focused.

The nature of these articles is particularly interesting because they all serve as guidelines for the Christian pilgrims to respect themselves, the Saracens’ religion, and the physical space around them. This is very different from the behaviors of white Christians who have traveled to other parts of the world at different points in history, which often resulted in the major disruption of the cultural and religious practices that existed prior to their arrival. Article twenty-three in particular is very keen on the potential disrespect that the pilgrims could potentially demonstrate to the religious practices of the Saracens that reside in the Holy Land. I think in some ways, these articles seem more modern, as they acknowledge every interaction that may occur between the white Christians and the Saracens, and they condemn any form of condescension that may come from the Christians’ end.

The Book of Wanderings of Felix Fabri: The Port of Joppa (Travel Annotation #4)

Felix Fabri begins his description of his time at The Port of Joppa with its extensive historical, mythical, and religious significance. He details the Greek tale of Andromeda, her romantic entanglement with Perseus, and the sea monster he saves her from before he swipes her off to Persia. He also explains Joppa’s ties to Biblical figures and affairs, noting that Noah’s son Japhet and Job are associated with the land. Overall, Fabri’s description of the Port of Joppa serves to explain its poor condition. Because of its extensive history of hosting violent, destructive events, the port remains in ruin upon Felix Fabri’s arrival.

Throughout the rest of this section, Felix Fabri details the process of retrieving an “ass-driver” for travel, which is very similar to that of catching a cab in a busy city, besides the grabbing of the passenger that takes place in Fabri’s case. Felix Fabri discusses his good fortune in interaction with Saracens and their workers, saying that he always received favored treatment from all the people he encountered during his time in Joppa.

Despite this section of his account being one of the most uninteresting and uneventful, Felix Fabri’s intentions are clear. He wants his readers to understand his exceptionalism, which he believes is God-provided. Such exceptionalism is a clear contrast to that which he experienced in The Holy Land, where he was extorted, robbed, and uncomfortably settled.

Again, Felix Fabri presents an interaction he has with a “black” person, but this time he is more gracious about his description of him, as he is reassured by Father Guardian that the moor is just doing his job when he grabs Felix Fabri to lead him to an ass. Fabri says that the black man’s face “had a cruel look,” but he goes on to learn the man’s name, and he learns that the man is enslaved by another individual. Felix Fabri and Cassa grow fond of one another, so much so that when they meet again they grab one another to embrace. Felix Fabri’s treatment of this particular black person strongly contrasts that which he provided for the Ethiopians in The Holy Land. Granted, the Ethiopian burglars invaded his private space in hopes of stealing his property, but to see that Fabri’s recount of the black moor is not dehumanizing comes as a surprise.