When I transferred my modern map onto the Hereford Mappamundi, there were many noticeable differences between the two maps. Firstly, the modern map showed accurate terrain and distances between locations, making it easier to understand how long it would take to travel from place to place. The medieval map is a T-O map so it is oriented with Asia at the top. There is no concept of true distance on the medieval map. Since the continents are not accurate in shape or size, the locations Margery traveled to are more abstract and you have to estimate where they would be. There is also a more detail about people that Margery may encounter on her journey, but no details on the terrain. The modern map has lines of latitude and longitude, making it easy to plot points accurately. Additionally, the modern map has many more detailed locations on it whereas the medieval map has set locations. To plot all of the points takes some estimation when the cities are not on the map.

Additionally, on the medieval map is oriented with north to the left and Jerusalem at the center of the map. The modern map which I detailed Margery’s journey on doesn’t have a center because the viewer can orient the map however they wish with the digital viewing technology. Although, it is worth pointing out that most modern maps have Europe at the center- indicating a Euro-centric ideology because Europe is centered in the middle. Similarly, for the Medieval map, Jerusalem is in the center of the map. Clearly, Jerusalem is oriented as the center of the world, emphasizing the importance of Jerusalem in the Christian World. The medieval map also includes other religious locations like the Garden of Eden, located at the very top of the map, clearly indicating that this map was drawn with Christianity as the focus. The modern map, however, is geographically accurate, with no religious motivations at all.

The modern map is in English, making it very easy to locate the ten locations. However, the medieval map is in Norman French and the writing is barely decipherable. Even if I could see the writing, I wouldn’t be able to understand the language. I used the Hereford Map website to help me place my initial locations (Rome, Jerusalem, and Venice). I then estimated where the other locations would be based on a modern map, estimating proximity and location.

The Hereford Mappamundi would be virtually useless to a traveler like Margery, unlike the modern map. The medieval map offers no real references for time and distance, and is not even an accurate representation of the shapes and and continents. Actually using a map like the Hereford map would lead to a very confusing journey, because there is no indication of distance and terrain. Traveling with a map, or even looking at it before the journey, would offer very little, if any, insight into how long and what the journey would look like. Additionally, the Mediterranean is incredibly inaccurate, making it impossible to plan for a sea voyage. 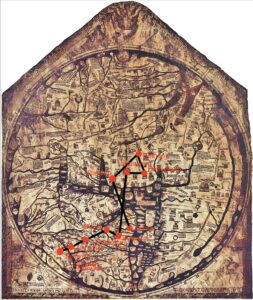 The Book of Margery Kempe
Location: Her Soul’s Destination
Kempe claims that her relationship with God had reached a level where it merited official recognition and celebration. This wedding, to God, happened somewhere in her spiritual being and Kempe signifies that the love shared between Goof and her had moved to a greater destination (Kempe 175-176). Kempe. Kempe describes the people who came to bear witness to her relationship with God, including Mary, Jesus, many saintly virgins, and each of the apostles (Kempe 175-176). They all show their support for Kempe with their praying for the future of her relationship with God (Kempe 176). Kempe chooses to also give us a glimpse into her emotions when she talks about being awestruck and shy when conversing with God (Kempe 175). Kempe records that changes to her relationship with God caused changes to her senses. Kempe began to smell something so perfectly sweet that it was unrecognizable to her. She seems to have been incredibly impressed by this sensation as it was pleasant enough for her to want it frequently (Kempe 176) She also began to her hear music and noises that affected her ability to communicate with other people as it distracted her; Kempe states that she was more likely to experience the noise when she was currently in the process of worshipping. Kempe also joyfully received these sensations of sounds as joyfully as the delicious smell and claimed that both of them had a beneficial affect on her body (Kempe 176-177) Another of the fantastical things she experiences are displays of beautiful light (Kempe 177). These sensations may show Kempe starting to understand what the afterlife is like; this is because she finds herself pleased with smells that don’t belong to earth and having her hearing other people impeded by something which she attributes to God (Kempe 178). In this way, she may be saying that she is already experiencing heaven while still alive. (Kempe 176-177)
I find the fact that Kempe states Christ views her as both like a wife and a mother figure to be something that probably made more sense during Kempe’s lifetime. This is essentially true as Kempe articulates that God married her but wanted her relationship with him to have aspects that are described as a mother and child form of relationship (Kempe 175,175-179) I also cannot understand how Kempe describes God’s stronger love for her than most of his other followers, and expects readers to just believe her without offering them any solid proof(Kempe 175-179)I believe that it is possible Kempe’s description of Jesus calling her to treat him like a son and a husband is possibly due to common people in her culture not having the vocabulary to talk about love as thoroughly as they wanted to (Kempe 175-179) This could also be a result of a tendency to associate different types of actions displaying love with different relationships. I believe that Kempe may have written about this change in her relationship with God in order to gain attention. This is because it is so different room anything that I have ever heard of someone claim that it seems like she is so desperate for people to people her that she has made up this encounter to be as outlandish as possible. (Kempe 175-179)