For this assignment, I redid my modern map to focus on a different part of Mandeville’s text. I took locations he describes in chapters 14 and 15 and mapped them on a modern map and the Hereford Mappa Mundi. While it was a little challenging to map some locations onto the modern map, as some of the place names Mandeville uses are different than they are today, it was much easier than mapping on the Hereford map. This was partially due to different technology between the two; Google Maps is intuitive to me and I understand how to use it efficiently, but I found it challenging to zoom in enough on the Hereford map and read the place names. I found myself wishing I had a high resolution, searchable version of it, like a fully searchable version of the interactive website, so I could simply look up where Ethiopia or Ezurum are on the Hereford map. I also found it hard to work with the Hereford map because of the language barrier – all of the writing is in Latin, and it was tricky to decipher the handwriting. I ended up using the modern map and a few different websites that pointed out specific places on the Hereford map to find locations in relation to each other. For example, one website had a cropped image of Babylon and the Euphrates river, which I used alongside my modern map to find some other locations in relation to the Euphrates. I also was able to find places such as Hereford, Jerusalem, Crete, and Mt. Etna to get my bearings and help decipher where locations such as Armenia were. However, I was not able to find exact locations of any places in my chosen route (with the exception of the Euphrates river), so I ended up making my best guess and circling areas where I thought these places were.

Comparing the two maps, I am not confident in my placement of several places, primarily Ethiopia and India. However, Mandeville is not accurate in his placement of them either. Making guesses about where places are in relation to each other seems in the spirit of a medieval travel narrative – I have not visited any of these places myself, so I used the resources at my disposal to make an educated guess about where they might be. Looking at the modern map, I question Mandeville’s proposed route – from the beginning of this route, he seems to zigzag and go back and forth more than is necessary, beginning at Trabzon, then going to Armenia, then turning around and going back towards Trabzon to reach Ezurum. Mapping the journey on the Hereford map exaggerates this problem, especially when it comes time to map Ethiopia and India. This is partially why I question my placement of these two locations, because it doesn’t make sense to me to go such a long ways west (down on the medieval map), then turn around and go almost the exact same journey east (up on the medieval map). Mandeville puts India and Ethiopia close to each other, but as I couldn’t read the place names on the Hereford map, I based my points on the modern map. I would like to know whether the Hereford Mappa Mundi is closer to a modern map in terms of accuracy, or whether the geography is closer to Mandeville’s text.

Points in order of journey: 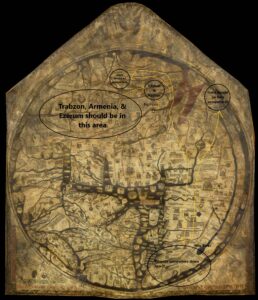 Points on map in order of journey:

The Book of John Mandeville: Tartary and Prussia

In chapter twelve, Mandeville presents a route to Jerusalem that does not take travelers by sea at all, instead allowing them to travel entirely by land. He claims that this route is “extremely long and dangerous and so full of hardships” that people generally take a different route (61). The hardships he describes come primarily when travelers reach Tartary and Prussia, and take the form of terrain, weather, and the people one might meet there. In Tartary, he describes both the people and the environment as “wretched,” claiming that it is an infertile land with very little agricultural potential and “no wine, no beans, no pulses” (61). There are a lot of animals, however, and Mandeville says that the people there eat all kinds of meat, from cats and rats and mice and other wild animals (61). He describes the weather as different extremes, either extremely cold or extremely hot, with “gales and thunderstorms” in the summer “which kill a large number of people and many animals” (61). In Prussia and the other areas surrounding Tartary, Mandeville focuses on the environment and its hazards, explaining that it is hard to travel through this area unless the seas are completely frozen. However, while the extreme cold allows travelers to cross rivers more easily when they are frozen, it presents other challenges, such as making areas uninhabitable and forcing travelers to carry all the provisions they will need until they reach the next habitable place (61-62).

Based on his description of Tartary, Prussia, and the surrounding areas, Mandeville seems unaccustomed to harsher environments where food does not grow easily and temperatures are more extreme. His description of the food that is and is not available reveals what he kinds of food he is used to; he makes the point that there isn’t any wine, beans, or pulses (part of the legume family), and he sees eating meat from cats, rats, and mice as unusual and perhaps even uncivilized, as he follows this observation with the claim “they are extremely wretched people and have a wicked nature” (61). Mandeville is most concerned with the agricultural potential of the land and the diets of the people there; he does not see them as substantial enough, seeming to be concerned about a lack of resources when he says “Princes and other gentlemen eat only once each day, and a very small amount at that” (61). He is also very judgmental towards the people who live in this area, describing them and their habits as wretched; he also warns travelers about the journey between Prussia and “the habitable lands of the Saracens,” saying that local spies will alert people when they see Christian travelers arriving in order to take them captive (62).

Sir John Mandeville, The Book of Marvels and Travels: India

India is not like previous lands that Sir John Mandeville has traveled to in previous chapter. This is a whole new world, it seems, for Mandeville and we can tell this through his tone and use of language. He seems very neutral throughout writing this and quite observational rather than opinionated. He notes a variety of different things throughout the journey, as this is such a new place for him. He gives a brief overview of the land and terrain. The first thing to note about this aspect is that he thinks India is much larger than what it actually was or even is today. He actually thinks that India is made up of “more than five thousand different islands.” (74)

Throughout reading Mandeville, I’ve noticed that he goes on strange stream-of-consciousness tangents (much like I do in these blog posts). For example, while he is described where India is situated in terms of other places he has been to, he goes on about how there are diamonds in this land and how they don’t compare to some of the other diamonds he has come across in Asia. He talks about how they are unbreakable how they have some kind of special courage giving powers (73). These are facts that I don’t think have any deeper meaning, but they struck me in a way that I could not ignore, so they are now included in this blog post.

When talking about the people in India, he is extremely condescending. The first sentence that even mentions people is this, “The people living near that river have a foul yellow-and-green complexion.” It doesn’t take much analytical interpretation to see that he is pretty grossed out by these people because they do not look like him, an “intellectual” and “civilized” man, or shall we say, “white.” There is an interesting part where he contradicts my earlier argument where I say that he is very condescending towards the people of India. He talks about the peoples’ different styles of religion. In this sense, he seems a bit understanding of how they worship. He wants to make clear that there is a difference between an idol and an effigy. Obviously in Christianity, the worship of anything other than God himself is idolatry and strictly intolerable. So why make the distinction between an effigy and an idol if he didn’t actually understand where they were coming from? “They say they know full well these effigies are not God, who made all things; but they are godly because of the miracles that they perform, and therefore they worship them.” (75) On some level, although he does not believe in the things that they do, he connects with them on this mere technicality.