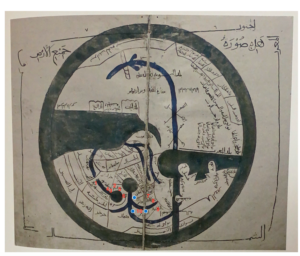 The impact of mapping Ibn Fadlan’s journey on a modern map and Medieval map is striking because of the differing proportions of the two maps. I used the Charta Rogeriana, a compilation of the smaller maps from the Tabula Rogeriana, to approximate Fadlan’s journey on a map that would be as close as possible to what his group would have used to navigate. What is immediately noticeable is the orientation of the two maps. Modern maps are oriented with north at the top but Medieval Islamic maps orient with south at the top. Fadlan comments multiple times about the “cold of hell” that he experiences as he moves farther north. This idea is compounded by the extreme distance Fadlan appears to have travelled. Baghdad, his starting point, is very close to the center of the world on this medieval map, since it is close to Mecca. In comparison, Fadlan’s final destination of Bulghar appears to be close to the edge of the world. This creates a powerful visual of how differently Baghdad and Bulghar are thought of. Map makers of the time were well aware that the Earth is a sphere and the world was simply flattened in order to be viewed better on a piece of paper, just as we used different map projections to do today. However, the symbolic nature of medieval maps cannot be ignored. The power of the Abbasid caliphate, based in Baghdad, is emphasized due to its position close to the center of the world. In this way, the distance between Baghdad and Bulghar is real spatially, but possibly also spiritually in the beliefs of people living near Baghdad, where the map would have been created. In the modern map the proportions of the continents are more accurately depicted with Eastern Asia, Russia, and Siberia taking up huge swaths of land to the East. In the Medieval map, the East, in general, could be described as squished in comparison. The Abbasid caliphate, which Ibn Fadlan served, influenced the creation of this Medieval map and this is very clear since it’s seat, Western Asia, dominates the map because of its primary position at the center of the world and size in comparison to other areas. The leg of the journey shown between Baghdad and Bukhara also emphasizes this point. In the modern map, constrained to about the same size and viewpoint of the Charta Rogeriana, visually takes up about 1/6th of the width of the map. On the Medieval map this leg takes up about 1/4th of the map. This demonstrates the importance of the land owned by the Abbasid caliphate and their allies; it is shown as expansive and central to travel throughout the world. In comparing the two maps, it is also clear that the Arabian Peninsula is also the most accurately mapped. This speaks to the fact that geographers of the time would know their own land the best, but also to the enduring legacy of the Abbasid caliphate. The lost map of Al-Khwārazmi, a geographer that worked for the Abbasid in the 9th century, informed the creation of the Tabula Rogeriana and therefore the Charta Rogeriana. The Tabula was created in Sicily in the 12th century and the Arabian Peninsula is still the most accurate portion of the map in comparison to modern standards.

Modern Map: Ibn Fadlan and the Land of Darkness (embedded)