Demonstrations and the culture of protest in France

In Toulouse, I got tear gassed. That is a story that I will tell for the rest of my life. Not only is it shocking to people, but also it allows me to tell people in my life about the protest culture in France. At the end of my first month in Toulouse, I went to volleyball practice for the first time. While I was waiting at the metro stop for the other members of the team, I noticed that there were a lot of people in the plaza. I knew that Saturday was the day of the Gilets Jaunes protests, but it did not look like they were doing anything, so I figured the protest was over and everyone was leaving. Then, in less than a minute, everything changed. The crowd gathered closer together, the protestors began chants, and eventually the police tear gassed and water cannoned the plaza. I, along with other bystanders and protestors, ran away from the scene. I ran into the closest building I could get into, but I got locked in. The police were waiting outside of the building to arrest people since they knew there were Gilets Jaunes inside. After 35 minutes, I got to leave, I found some of the volleyball girls and we went to practice. I was shocked that everything continued as normal after such an intense protest. But for Toulouse in this turbulent time, that was a normal Saturday evening. 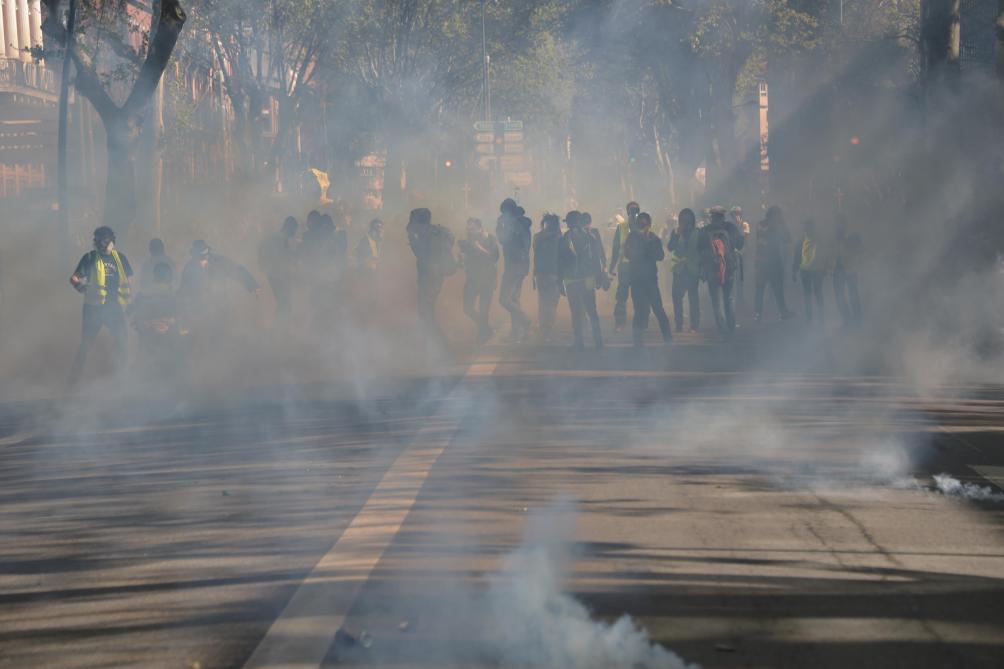 This week, on the 5th of December, was the national strike in France. The initial reason for this strike is the retirement and benefit changes that the government has proposed. However, many other movements joined in for this national day of strike. Not only was transportation shut down in many places, but also some schools and universities closed. For example, the IEP, my university, decided to shut down until Friday, the 6th. Today, on the 6th, the students decided to continue their strike and occupation of the buildings, and therefore we continue to have no class until at least next Tuesday. Then, they wil l vote again in a general assembly, which consists of whatever members of the community want to attend, whether to continue the strike until the end of the semester. *Between the writing and publication of this article, the occupation has been renewed until the 13th of December.

Difference in Protest Culture between France and the US.

The idea of revolting or protesting is an important aspect of the history and of the present in France. It is very different than protest culture in the US. Starting from the Revolution up until the December 5th strike of this year, the French people are rooted in protesting. There have been times of violent protesting, like with the capture of the Bastille in the 18th century, and like today with the Black Bloc protestors. But there are also times of more calm protests, like we saw yesterday during the strike in Toulouse (ed: December 5th). Regardless of the type of protest, they have worked in France to change things in the government that the public is unhappy with. The Revolution in the most prominent example of how revolting and protesting has worked for France. There are others as well, including the uprising of students against the government of De Gaulle in 1968, and in 1995, with the strikes against the “plan Juppé”.

In the United States, protests are much more common than strikes. But even when there are protests, they are not national such as in France. There are protests for individual causes, and they usually last no more than a day. A good example is the Women’s March. This is a group that holds protests in many big cities around the US every year. The goal is “to harness the political power of diverse women and their communities to create transformative social change” (Women’s March), but not necessarily to make specific changes in law or government. This is more commonly the purpose of protests in the US because the constitution and the law is much harder to change than in France. Our constitution is almost impossible to amend, while in France, they amend the constitution about every two and a half years. This is a simplified explanation for why protest culture is so different in France, and why the protests make change in France.